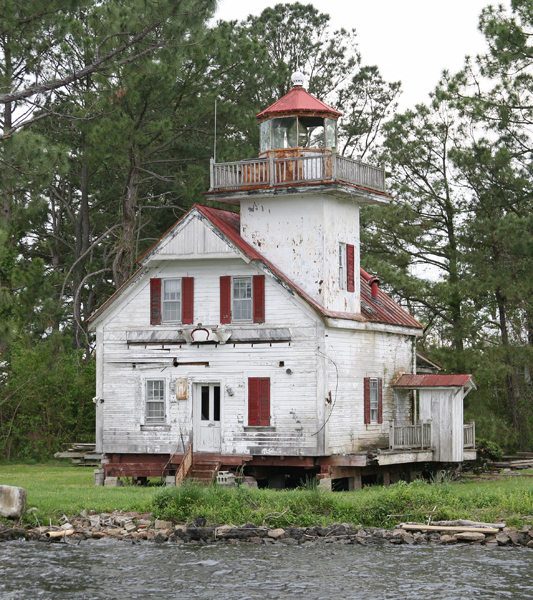 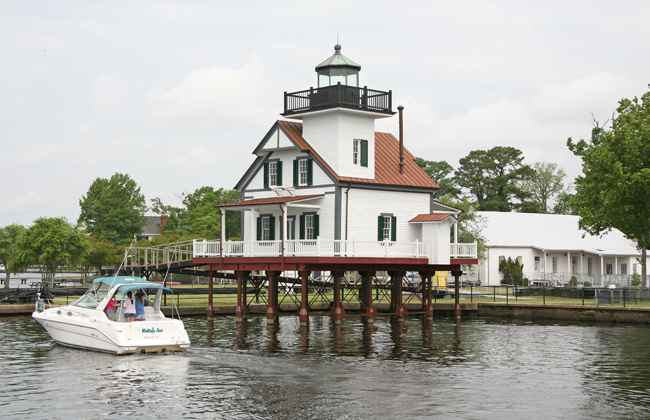 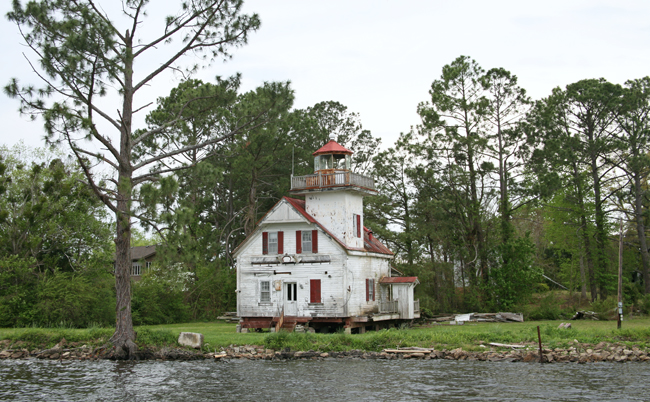 The town of Plymouth, formerly known as Plymouth Landing, reportedly received its name because sailors from Plymouth, Massachusetts called there regularly for cargo. Flatboats carried products down the Roanoke River from outlying farms and forests to Plymouth, where they could be loaded on sailing vessels. Tobacco, corn, rice, turpentine, and masts were transported from Plymouth to ports as far away as the West Indies. In 1790, the U.S. Congress established Plymouth as a port of delivery with its own customs house, and by 1806, the town had twenty-five ocean-going sailing ships, was one of six primary ports in North Carolina, and ranked ninth in population.

Congress appropriated funds on June 30, 1834 for a lightship to be placed in Albemarle Sound near the mouth of the Roanoke River to guide vessels to the river and the port of Plymouth upstream. A wooden-hulled, three-masted sailing ship was converted into the lightship, which was named MM. One lamp with nine cylindrical wicks was being shown from the lightship at an elevation of forty-two feet in 1848.

In 1857, the Lighthouse Board recommended that a permanent light replace the lightship, as its annual maintenance would be much less, but the change was not effected before the Civil War. When Union forces invaded eastern North Carolina in 1862, Confederates took control of the lightship and sailed it up the Roanoke River, where it was later scuttled.

Following the conflict, work on Roanoke River Lighthouse commenced near the mouth of the river to replace the lightship. The design of the screwpile lighthouse was very similar to others used in North Carolina's Pamlico, Albemarle, and Croatan Sounds: a rectangular structure with a pitched roof surmounted by a lantern room housing a Fresnel lens.

Roanoke River Lighthouse was one of five screwpile lights established in North Carolina in 1867, and in 1800, a fog bell, struck every fifteen seconds by machinery, was placed on its eastern side as an additional aid for mariners. A fire on March 21, 1885 destroyed the lighthouse, but since it was considered critical, a dwelling and lantern built for the new Croatan Lighthouse were redirected to Roanoke River. Work on placing the new structure atop the existing foundation began on July 13 and was finished on July 30. A fourth-order light beamed forth from the new lighthouse on August 15, 1885, replacing a temporary lens lantern that had been exhibited from a pole.

In winter, ice floes were a constant plague for screwpile lighthouses, like the one at Roanoke River. In January 1886, just five months after the light was established, ice severed two of Roanoke River Lighthouses spindly support legs causing the structure to collapse into the sound.

The Annual Report of the Lighthouse Board for 1887 detailed the construction of the replacement lighthouse, which served until the station was discontinued in 1941.

In July plans were made for a new structure to replace the one damaged beyond repair by the ice in January, 1886. Bids were invited for furnishing the necessary materials, and contracts were made in September. The framing of the superstructure at the Lazaretto depot was completed in November. A pile driver 50 feet high, for use at the site, was also constructed during that time. The tenders left Baltimore on December 3, with part of the material in tow upon scows. The iron-work for the foundation was loaded on a hired barge at Fort Monroe, and the vessels arrived at Edenton on the 17th, where the materials on the barge were stored until needed. The piles for the construction-platform, which were delivered in rafts at Edenton by the contractor, were towed to the site, the pile-driver scow was placed in position, and the driving of the piles commenced. The platform was in place and nine of the foundation piles were driven by the end of December, and on January 10, the rest of the piles were in position. The superstructure was completed, with the exception of the painting, on February 12, when the new station was put in charge of the keepers, and two workmen left to finish the painting. The old station was, meanwhile, removed, such portions being saved as would be useful in future constructions. The new light-house is a square frame structure, with a tower at one of the corners, on which the lantern is placed. The substructure is of iron, resting on 24 wooden piles, driven 8 feet apart and cut off at low-water mark. This iron-work is a part of the material originally purchased for a proposed buoy-depot wharf at Fort Monroe. The light is fixed white of the fourth order.

The new lighthouse had two rooms on each floor, and families lived at the offshore station for several decades before keepers started commuting to the lighthouse from Plymouth.

After the lighthouse was discontinued, it played host to only Sea Scout troop meetings and clandestine card games. In 1955, waterman Elijah Tate purchased Roanoke River Lighthouse, along with two other Albemarle Sound lighthouses, from the Coast Guard for $10 each. Tragically, Tate dropped two of the three lighthouses into the sound while trying to relocate them. Before testing his luck with the third lighthouse, Tate sold it to his friend Emmett Wiggins, who often passed the lighthouse during his work as a tugboat operator. Wiggins gave the following account of moving the lighthouse. I had an old Landing Craft Infantry (LCI) that I used as a barge, so I went out to the light and knocked away all of the pilings except those at the diagonal corners. Then I sank the LCI down far enough to float under the lighthouse. When I pumped the water out, the barge came up under the heavy wooden sills of the main lighthouse structure. As soon as I cut away the remaining piles, everything floated free and I sailed back to Edenton with my new home. The whole job took about 36 hours.

Wiggins placed the lighthouse on a piece of property he had purchased near the mouth of Filbert's Creek.

Rex Young and his wife Barbara received orders to Marine Corps Air Squadron 225, Naval Auxiliary Air Station, Edenton, in September 1955. Base housing was not available and affordable rentals in town were scarce, so the couple heeded the advice someone gave them to check into the possibility of moving into the lighthouse. By that time, Emmet Wiggins had replaced the broken windows in the lighthouse, dug a water well, installed indoor plumbing, a floor furnace, and steps up to the kitchen door at the back of the structure. The Youngs, being youthful and energetic, agreed to move into the lighthouse and continue restoration work with the needed improvements being deducted from their $50/month rent.

The second couple to inhabit the lighthouse after its relocation to Edenton was Rhea and Lucy Adams, with their son Rhea Jr. and his brother. Rhea Jr. contributed the two historic pictures included in the text that show how Rhea Sr. helped renovate the lighthouse and make it livable during their stay from 1957 to 1959.

After being used as a rental property for a few years, the lighthouse became Wiggins' primary residence starting around 1960.

The bell and lens from the lighthouse were donated to the town of Edenton in the 1970s. The bell was removed from the lighthouse, but for some reason, the lens remained atop the lighthouse in a lantern room with broken window panes. There is a bell that is on display in Queen Anne Park, located on Water Street, a few blocks east of the current site of the lighthouse. This bell was fabricated by the Mc Shane Bell Foundry of Baltimore, Maryland in 1901. Since a fog bell was first established on Roanoke River Lighthouse in May 1880, the Mc Shane bell either replaced an earlier bell or came from somewhere else.

In the 1990s, officials with the Port OPlymouth Museum discussed the future of what was by then North Carolinas only surviving screwpile lighthouse with Wiggins. Wiggins proposed turning it into a floating maritime museum, while the officials thought it would be better to move the lighthouse to Plymouth. Wiggins agreed to sell the lighthouse, but he passed away in 1995 before a deed was signed. Wiggins heirs wanted an exorbitant one million dollars for the dilapidated lighthouse, much more than the museum could afford.

The museum and the Washington County Roanoke River Commission decided they could build a lighthouse for much less than that, and in the fall of 2001, pilings were sunk into a grass field along the banks of the Roanoke River in Plymouth to serve as the foundation for a replica of the 1866 Roanoke River Lighthouse. Over the next two years, work on the lighthouse was carried out using plans copied from the originals that were located at the National Archives. Much of the projects cost was covered by $515,000 in federal funding.

Lighthouse enthusiasts rival Civil War enthusiasts in their passion, says Harry Thompson, Curator of the Port OPlymouth Museum and chairman of the lighthouse project. With this project we can become the first stop on a tour of North Carolina lighthouses. The project may yet receive an authentic piece of history from the Roanoke River station, as the 1835 lightship was located in forty-seven feet of water in the Roanoke River in 1999. There are plans to raise the lightship and place it near the lighthouse, but it would be a major undertaking.

Meanwhile, the historic Roanoke River Lighthouse languished on the banks of Edenton Bay. In 2003, Hurricane Isabel produced a storm surge that flooded several homes near the lighthouse. A few of them were condemned and had to be destroyed, and the lighthouse must have certainly experienced significant damage as well.

In May 2007, the Edenton Historical Commission purchased the lighthouse for $225,000 and paid Worth H. Hare & Son House Movers Inc. $75,000 to load the lighthouse onto a barge and transport it to Colonial Park at Edentons downtown waterfront area. The move took place on May 23, 2007.

The State of North Carolina provided $1.2 million for the restoration of the lighthouse in 2009, and work was expected to begin on the structure in the spring of 2010, when employees of the A. R. Chesson Construction Company, who were preparing the new site for the lighthouse, smelled an odor later determined to be petroleum. The contamination, likely from an oil company that had previously occupied the site, led the Edenton Historical Commission to file for permits to permanently situate the lighthouse over the water.

Restoration of the exterior of Roanoke River Lighthouse was carried out from early June to mid-October of 2010. You can watch a condensed time-lapse video of the work on this website. On May 1, 2012, the lighthouse was moved to its new foundation atop pilings in the harbor by the same company responsible for its move in 2007. Restoration of the interior began in March 2014, and after years of anticipation, the historic Roanoke River Lighthouse finally opened to the public on August 15, 2014.

The Fresnel lens will be returned to the lighthouse when additional funding is obtained to renovate its interior.

For a larger map of Roanoke River Lighthouse, click the lighthouse in the above map.

Roanoke River Lighthouse is open daily from 10 a.m. to 4 p.m.


The relocated Roanoke River Lighthouse isn't the first lighthouse to call Edenton home. At one time, there was a pair of range lights to guide mariners into Edenton, and the rear light was displayed from a tree.