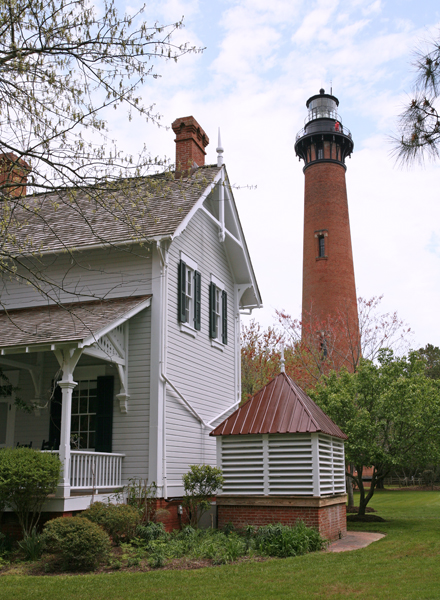 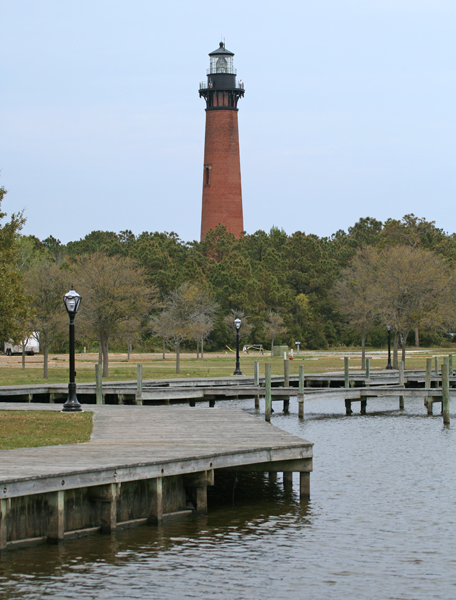 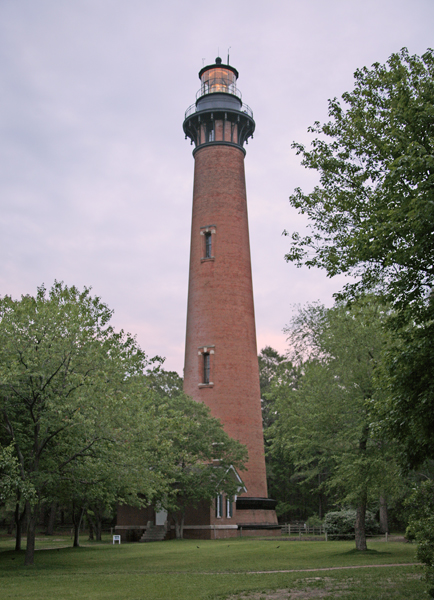 Currituck Beach Lighthouse is distinct among its fellow coastal beacons along the Outer Banks both in history and appearance. The other four tall lighthouses (Bodie Island, Cape Hatteras, Ocracoke, and Cape Lookout) are painted in striking black and white  in spiral, horizontal, and checkered patterns  while Currituck Beach Lighthouse shows off the natural brick used in its construction. And while the others suffered early damage and drama with everything from pirates to Civil War skirmishes to encroaching waters, Currituck Beach Lighthouse had an uneventful beginning and a slow decline.

Nearly 100 years after the first lighthouse was constructed along North Carolinas shores, there remained a forty-mile stretch of dark coast between Bodie Island and Cape Henry, Virginia, where ships still fell prey to the dangerous waters of the Outer Banks. Although Congress had allocated the necessary funds for the lighthouse as early as 1854, the outbreak of the Civil War put a stop to any construction.

In its 1871 Annual Report, the Lighthouse Board reemphasized the need for the lighthouse and requested funds to begin its construction:

With the completion of the Light house at Bodys Island there will remain only one important interval of unlighted coast on the Atlantic from the St. Croix [River], Maine, to about Mosquito Inlet, on the coast of Florida. That dark space will be embraced between Cape Henry and Bodys Island, a distance of eighty miles and an unlighted space of forty miles, at the center of which there should be a first-order Light, so that from Cape Henry to Cape Hatteras the broad side of that long stretch of low land and dangers could not be approached within eighteen or twenty miles without seeing a warning of danger. In order to avoid the strong current of the Gulf Stream, vessels bound round Cape Hatteras from the northern and eastern ports run inside of the cold wall of water of that stream, within which they have a favorable current of one mile per hour on an average, and a smoother sea in bad weather; but in the absence of powerful sea coast Lights sufficiently near each other to give warning of approach to danger, many vessels laden with valuable lives and cargoes have been lost between these points. It is now believed that the construction of this tower should be no longer delayed.

Congress appropriated $50,000 on March 3, 1873 to commence the construction of the lighthouse and followed this up with appropriations of $70,000 in 1874 and $20,000 in 1875 to complete the project. After the desired site was purchased, the State of North Carolina ceded jurisdiction over the parcel to the federal government in November 1873.

Dexter Stetston, who had previously overseen the construction of the new lighthouses at Cape Hatteras and Bodie Island, began work on the 162-foot tower in 1874. Quarters for the workers were erected, along with a carpenters shop and blacksmith shop, and a wharf was built in Currituck Sound with a railway extending from its outer end to the construction site. After test borings revealed the character of the soil at the site to be composed of sand and mud, piles, spaced nearly three feet apart, were driven to a depth of roughly twenty-four feet and then capped by twelve by twelve-inch timbers treenailed to the tops of the piles. A second set of timbers was laid at right angles to the first to form a grillage atop which an octagonal stone base was built. Well over a million bricks were then used to form the conical tower, and on December 1, 1875, the last brick lighthouse to be built on the Outer Banks was illuminated for the first time by Nathaniel G. Burris, its first head keeper.

The towers first-order Fresnel lens was originally illuminated by a mineral oil lamp consisting of five concentric wicks that produced a fixed white light, varied every ninety seconds by a red flash, that was visible for eighteen nautical miles. Three keepers and their families shared a Victorian stick style duplex constructed from pre-fabricated materials sent by barge and constructed on-site.

In late January 1878, the Metropolis was sailing south along the Atlantic coast bound for Brazil, carrying iron rails and 214 workmen for building a railroad. A gale caused the cargo to shift, opening seams in the hull, and at 6:45 a.m. on January 31, the freighter ran aground on shoals about 100 yards from the beach at Currituck. Keeper Burris recorded the following in the stations log for that date:

About 11 AM I was informed there was a wreck on shore below here. I immediately hastened to the spot. We did all we could to save the passengers and crew and afterwards minister to their wants. The vessel is a total wreck and most of the cargo lost. Near a hundred of the passengers and crew remained and were fed at this station.

On November 5, 1886, the keeper and his two assistants, who were in the lantern room, felt an earthquake shake the tower. The Fresnel lens rattled and suspended objects started to swing, but no damage was done to the lighthouse. The tremor was an aftershock of the earthquake that had devastated Charleston, South Carolina two months earlier.

To relieve the cramped housing conditions at Currituck Beach, a thirty-three by thirty-four-foot, two-story dwelling was relocated from Long Point Lighthouse at a cost of about $4,000. Over a three-month-period starting in December 1919, the unused dwelling, which weighed about forty tons, was jacked up, slid onto two flush-deck scows using skids and rollers, transported across Currituck Sound, and then slowly windlassed to its new home. The work crew lived in the house during the move, and were fed by a cook and mess attendant.

One of the last men responsible for Currituck Beach Lighthouse was William Tate, who is perhaps best known not for his lengthy lighthouse keeping career but for his role in an event that occurred earlier in his life. Tate and his wife Addie were in charge of the Kitty Hawk Post Office, when William received an inquiry from two bicycle manufactures in Ohio regarding conditions at Kitty Hawk. After noting that the Kitty Hawks sand hills and regular winds would be a fine place for their experiment, Tate extended a gracious invitation to the Wright brothers: If you decide to try your machine here & come, I will take pleasure in doing all I can for your convenience & success & pleasure, & I assure you you will find a hospitable people when you come among us.

Wilbur Wright was welcomed into Tates home on September 13, 1900, and after Orville arrived soon thereafter, the brothers began assembling their glider in Tates front yard and used Addie Tates sewing machine to piece together the wing fabric. Tate later recalled what the locals thought of the two dreamers from Ohio:

The mental attitude of the natives toward the Wrights was that they were a simple pair of harmless cranks that were wasting their time at a fool attempt to do something that was impossible. The chief argument against their success could be heard at the stores and post office, and ran something like this: God didnt intend man to fly. If He did He would have given him a set of wings on his shoulders. No, siree, nobody need not try to do what God didnt intend for him to do. I recall, not once, but many times, that when I cited the fact that other things as wonderful had been accomplished, I was quickly told that I was a Darned sight crazier than the Wrights were.

Tate and members of the crew of the nearby Life-Saving Station at Kill Devil Hills quickly became friends of the Wright brothers and assisted in making manned flight a reality.

Currituck Beach Lighthouse was automated in 1939, when the U.S. Coast Guard absorbed the U.S. Lighthouse Service, and resident keepers were no longer needed.

During World War II, coastguardsmen were stationed at the lighthouse to patrol the nearby beach, but after the conflict, the stations usefulness declined, the property was abandoned, and by the 1970s the tower and the dwellings had fallen into disrepair. Vandals had stripped the keepers house of its wainscoting and destroyed the mahogany balustrades. Broken doors and windows left the house open to the elements, and soon the porches had fallen in, the floors were ruined, and tangled vines crept in and out.

Fortunately a group of concerned citizens formed the Outer Banks Conservationists (OBC), Inc. in 1980 and leased the propertyexcluding the lighthousefrom the State of North Carolina. Thanks to their efforts, the original keepers house is now on the National Registry of Historic Places, and the station has been returned to its former beauty. Over a million dollars has gone into restoring and maintaining the property.

OBC was able to open the lighthouse to the public on July 21, 1990. In 1999, the towers ironwork was restored and reproductions of the original wooden windows replaced the rather unfortunate Plexiglas panels serving as temporary shields in the service room.

The National Historic Lighthouse Preservation Act of 2000 made several lighthouses, including Currituck Lighthouse, available to federal, state, and local agencies, non-profit corporations, and community development organizations. Both OBC and the County of Currituck Board of Supervisors filed applications for ownership of Currituck Lighthouse in February 2003. The National Park Service Review Committee rated the two applications in March 2003, and recommended that OBC be awarded the lighthouse. Currituck County immediately appealed the decision, and, backed by the support of Congressman Walter Jones, the dispute soon escalated into what was called the Fight for the Light. In the end, the deed to the lighthouse was signed over to OBC, justly rewarding the organization for its years of restorative work.

Shady brick walkways link the lighthouse keepers houses with several outbuildings, including a gift shop. Visitors can climb the 214 steps up the circular staircase to the lighthouse gallery, and romantically-inclined lighthouse enthusiasts can even schedule weddings on the grounds of the compound. From Good Friday until just before Thanksgiving, visitors can travel back to the time before radars and airplanes, back to the time when lighthouses provided life-saving navigational assistance. And every night, from dusk to dawn, the twenty-second flash cycle of Currituck Beach Lighthouse continues to illuminate the sky.

For a larger map of Currituck Beach Lighthouse, click the lighthouse in the above map.

Upon reaching the Outer Banks via Highway 264, turn north onto Highway 158 and drive north passing Nags Head and Kill Devil Hills. When Highway 158 turns west, you need to continue up the narrow finger of land on Highway 12 for 20.5 miles to reach the lighthouse.

Currituck Beach Lighthouse and Museum Shop are open daily from Easter through Thanksgiving (closed Thanksgiving Day). Call (252) 453-4939 for lighthouse hours and more information. There is a small fee for climbing the lighthouse.

The lighthouse is owned by the Outer Banks Conservationists. Grounds/dwelling/tower open.