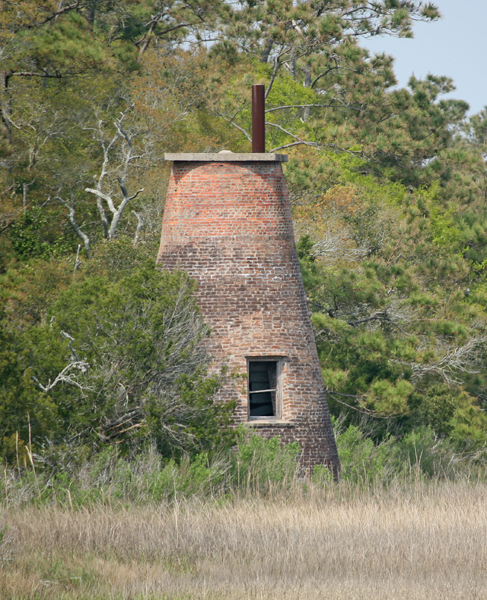 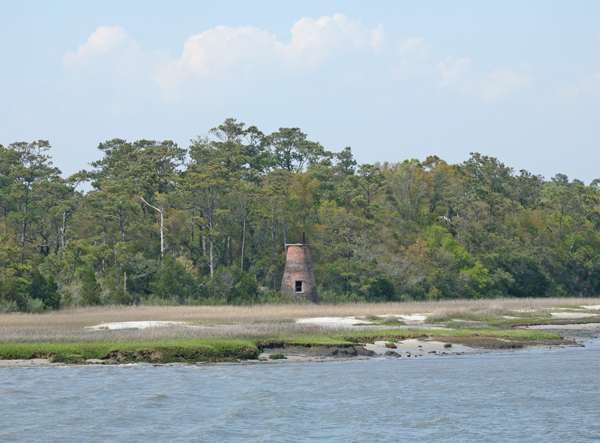 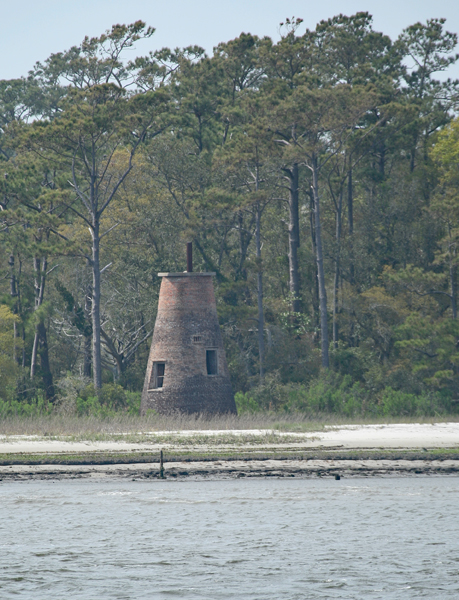 This rather decrepit and inaccessible structure is the largest remaining piece of the system of lights that served the once-bustling trade route from the mouth of Cape Fear River to Wilmington. For years, merchants and mariners had lobbied for lights to mark this twenty-five-mile-long passage, and on August 14, 1848, $35,500 was finally appropriated for seven beacons and a lightship. These navigational aids were, from south to north, range lights at Oak Island, range lights at Price's Creek, a lightship at Horseshoe Shoal, a beacon on Orton's Point, a beacon on Campbell's Island, and a beacon on Upper Jettee. Click here for a map showing the location of these aids using GPS coordinates from an 1858 light list.

The range lights were built in pairs, with a shorter light in front of a taller light. By positioning their vessels so that the taller light appeared directly above the shorter light, mariners knew they were safely in the center of the channel. All the lights were built in 1849 and 1850, with the exception of the lightship, which was established in 1851, and Upper Jettee, which ended up receiving range lights in 1855.

Constructed entirely of brick, the walls of the twenty-foot-high Price's Creek front range tower taper from three feet thick at the base to two feet thick at the top, while the diameter of the circular tower shrinks from seventeen feet to nine feet. The tower's sister light, located around 700 to 800 feet away, also served as the keeper's quarters. It was a larger, square, brick structure with a lantern room on top and had an overall height of thirty-five feet. Both lights in the range were originally fitted with eight lamps and eight fourteen-inch reflectors, but these were replaced in 1855 by sixth-order Fresnel lenses that produced a fixed white light. Although the first person appointed as keeper was Samuel C. Mabson, for some reason he never took up the post, and John Bell worked as the first keeper.

In 1855, the lighthouse inspector noted that introducing a Fresnel lens in each tower, powered by a single lamp, resulted in the saving of 198 gallons of oil each year, which amounted to nearly enough to pay the salary of the keeper.

The glory days of Price's Creek Range Lights occurred during the early part of the Civil War, when they served to guide daring Confederate blockade runners past Union ships stationed offshore. Additionally, the Confederate army turned the brick keepers house into a signal station, which provided communication between Fort Caswell and Fort Fisher.

Hanson Ruark was serving as keeper of the range lights at the outbreak of the Civil War, and his daughter, Mary Catherine Ruark, later recalled climbing to the top of the lighthouse as a child and watching both the first and second battles for Fort Fisher.

The Union eventually gained complete control of the coast, forcing the Confederates to retreat inland. Rather than let the lighthouses remain for the enemy, Confederate soldiers dismantled or destroyed as many lights as they could.

The lighthouses along the Cape Fear River never recovered from the war. Perhaps because of the crippled Southern economy, they were deemed unnecessary and never rebuilt. In 1867, the Lighthouse Board proposed constructing new towers at Price's Creek and refurbishing the old dwelling, but this work was apparently never carried out.

Robert M. Ruark, son of Keeper Hanson Ruark, was visiting the lighthouse in 1868 when the stairs gave way, and he plummeted to the bottom of the tower. Robert died about thirty minutes later as a result of a piece of timber that struck near his heart.

By the end of the nineteenth century, the rear range light at Prices Creek had sustained such storm damage that it was torn down and the bricks hauled off and used by locals. Now, none of the river lights remain except the front range light at Prices Creek, which is in a state of disrepair. The lantern room is gone, the windows are missing, and the land is privately owned by the Archer Daniels Midland (ADM) Corporation, which operates a citric acid plant along the banks of the river. (In 1947, Colonel J.S. Crawford of Washington, D.C. was the owner of a three-acre plot that included the lighthouse.)

In 1996, ADM pleaded guilty and paid a $100 million fine for its part in a price fixing scheme in the worldwide lysine and citric acid markets. Because of this scheme, consumers had to pay more for products such as soft drinks, processed food, and detergents, which all contain citric acid. Too bad part of their penance wasnt to fix up Prices Creek Lighthouse. A power facility near the lighthouse supplies steam to the ADM plant.

Jason Jennette visited the range light in October 2012 on a trip organized by the Outer Banks Lighthouse Society and provided pictures of the stairs in the tower and what is believed to be the foundation of the keeper's dwelling, a short distance away.

There is no public access to the lighthouse, but at least it still stands, a reminder of the days when the Cape Fear River was more actively used for travel and trade.

For a larger map of Price's Creek Lighthouse, click the lighthouse in the above map.