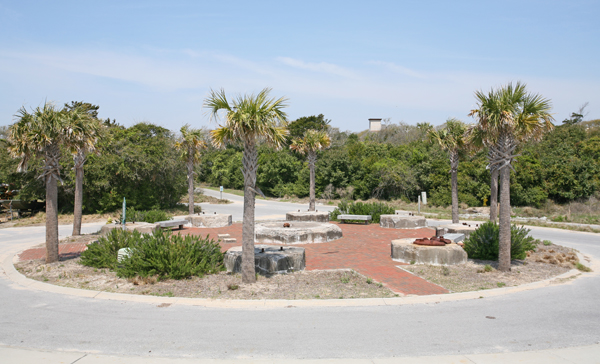 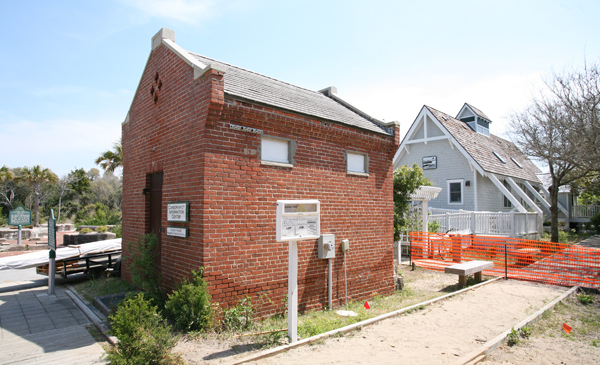 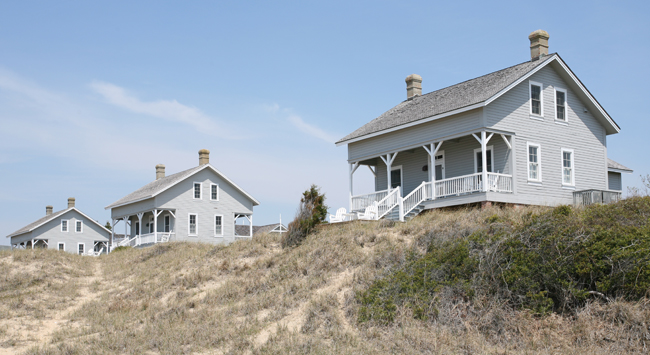 The small, triangular complex of islands located at the mouth of the Cape Fear River and known collectively as Smith Island has had three lighthouses grace its shores. These beacons were erected to warn mariners away from the dangerous Frying Pan Shoals, which extend some eighteen miles southeast of the island, and to guide vessels to the mouth of the river. In 1784, the North Carolina General Assembly passed a law that levied a duty of six pence per ton on all vessels sailing up the Cape Fear River towards Wilmington. The collected money was used to build a lighthouse at the extreme point of Bald-head or some other convenient place near the bar of said river, in order that vessels may be enabled thereby to avoid the great shoal called the Frying-Pan. Work on the lighthouse had commenced by 1789, but sickness and the stranding of supply vessels greatly delayed the completion of the beacon. In fact, the lighthouse was only partially complete when it and an accompanying ten-acre tract of land were ceded over to the newly formed federal government in 1790. Congress appropriated $4,000 in 1792 to complete the lighthouse, a task that was carried out by December 1794.

North Carolinas first lighthouse had been built too close to the rivers edge, and in 1813, the endangered tower was ordered torn down. That same year, Congress approved $15,000 for rebuilding the Bald Head Lighthouse. The replacement tower was completed in 1817 and remains standing to this day. Neither the new lighthouse nor its predecessor was deemed satisfactory at marking Frying Pan Shoals, and in 1854, a lightship was anchored near the outer extreme of the shoals to better indicate the hazard.

The Annual Report of the Lighthouse Board for 1889 stated:

The shoals forming the continuation of this cape (Cape Fear) for about 18 miles to the southeast are dreaded by shipmasters only a little less than those at Cape Hatteras. At present a lightship near the outer extremity of the shoals warns vessels of danger and gives them a good point of departure. This aid to navigation cannot be dispensed with, but it is not sufficient to insure adequate protection to the large number of domestic and foreign vessels attracted to this point by the considerable and increasing trade of the neighboring port of Wilmington, N.C., because of the small area lighted by it and because of its liability to be set adrift from its moorings during heavy storms, which is the very time when the light is most needed.

The present Cape Fear light (Bald Head), on account of its inland position and want of height does not cover the shoal and therefore does not give sufficient warning to vessels when the lightship may have drifted from her moorings. A first order lighthouse built on the pitch of Cape Fear, with a radius of 18 ½ miles of light, would be seen so far as to give timely warning, and the fact of being near enough to the coast to see it would be a sufficient indication that the observer should make a better offing.

The report also noted that there was no first order lighthouse between Cape Lookout, N.C., and Cape Romain, S.C., a distance of about 170 nautical miles. A masonry tower with a height of 150 feet along with a keepers dwellings and the necessary outbuildings were recommended for the southeastern end of Bald Head Island at an estimated cost of $150,000.

A twenty-acre plot of land along with a right-of-way was obtained for $4,000 on the southeastern point of the island through condemnation, and a tramway line was constructed to connect the site with the Cape Fear River, located roughly three miles to the west.

On March 3, 1901, Congress provided the additional $35,000, and the following month, a contract was signed for an octagonal, iron, skeletal tower that would stand 150 feet tall. The tower was finished on June 3, 1903, and later that summer, on August 31, the tower first beamed forth its powerful beacon produced by a revolving first-order Fresnel lens. The lens had a diameter of just over six feet, featured twenty-four flash panels, and completed one revolution in four minutes to produce a flash every ten seconds. Three one-and-a-half-story keepers dwellings, painted white with lead-colored trimmings and green blinds, were built in a row, 450 feet southwest of the tower.

Captain Charles Swan, whose father had been captain of the Frying Pan Lightship, served as head keeper of Cape Fear Lighthouse from 1903 until his retirement in 1933. Devaney Farrow Jennette served as first assistant keeper under Captain Swan from 1919 until 12:10 a.m. on December 5, 1932, when he died of a heart attack in the watchroom just after climbing the tower to relieve Captain Swan. For roughly a year prior to his death, Keeper Jennette had been experiencing chest pains following physical exertion, and he had to pause repeatedly while climbing the tower to avoid the painful incidents.

In August 1906, the upper part of the tower above the columns was changed from white to black to provide a more conspicuous daymark. In 1915, $35,000 was requested for moving the tower and dwellings to the site of Bald Head Lighthouse, as it was believed that erosion would soon endanger the structures. The funding request was not repeated, and the fact that the dwellings still stand today near their original sites indicates that the feared erosion did not occur.

When originally installed, the lens revolved atop chariot wheels, but in May 1920, the crew of the lighthouse tender Water Lily delivered and installed a three-ton mercury float for the lens.

Gus Swan lived with his parents and five siblings at Cape Fear Lighthouse for four months each summer when school was out. Each day, Gus would patrol the beach in search of turtle eggs that he would sell to buy school clothes. I would pick up at least 100 to 120 eggs per day and sell them for 10 cents a dozen, Gus recalled. Ironically, Bald Head Island Conservancy, which runs a Sea Turtle Protection Program, operates its Turtle Central gift shop just steps from the foundation of Cape Fear Lighthouse.

Captain Swans career would span more than half the life of the tower, as it was discontinued in 1958 when the powerful Oak Island Lighthouse became operational. No longer needed, the old tower was demolished as it was felt it might confuse mariners if left standing. Portions of the support columns were cut away, and dynamite charges were used to bring the tower crashing down, creating a pile of twisted rubble.

The massive concrete blocks, which anchored the eight support legs that were arranged around the towers central column in an octagonal pattern, form a roundabout at the eastern end of the island. The concrete block in the center supported the spiral staircase, while smaller blocks just south of the central one must have served as a foundation for the entrance to the tower.

In addition to the footings, the towers redbrick generator house remains at the site. In 2017, the generator house was home to a snack shop known as Mike's Bites. The three keepers dwellings, now known as Captain Charlies Station after the long-term keeper, are still standing along the beach just south of the tower. These residences have been well preserved and are currently available as rental properties.

Frying Pan Shoals Lightship remained on station even after the establishment of Cape Fear Lighthouse. The lightship was retired in 1964, when the Frying Pan Light Tower was established. This modern Texas Tower, which extends forty feet above the water and forty feet down to the ocean floor, was built in Louisiana and barged to the shoals. Automated in 1979, the tower was later auctioned off and is now privately owned.

In 2009, the Old Baldy Foundation purchased the remnants of Cape Fears first-order Fresnel lens on display outside an antique dealer in Wilmington, North Carolina. The lens was crated up, transported to the island, and placed in storage. The foundation now owns the entire lens framework, the base on which the lens turned, and about thirty percent of the lens prisms, including seven bulls-eye panels, and is looking to acquire any other pieces that are privately owned. The lens was purchased by Mr. Labriola, owner of the antique shop, in 1968, but over the years individual prisms and entire bulls-eye panels were sold to customers. In 2010, the lens pedestal was dismantled and cleaned, and future plans call for the construction of an exhibit building near Old Baldy so the historic lens can be displayed.

Located on the southeast corner of Bald Head Island, which is located three miles offshore from Southport at the mouth of the Cape Fear River.
Latitude: 33.84665, Longitude: -77.96589

For a larger map of Cape Fear Lighthouse, click the lighthouse in the above map.

Bald Head Island can be reached via a 20-minute ferry ride from Southport. Once on the island, golf carts and bicycles can be rented from Island Passage ((910) 457-4944) to tour the island and visit Old Baldy and the remains of Cape Fear Lighthouse.


The middle of the three cottages at Captain Charlie's Station is used as the home of Marina Lemke (Demi Moore) in the movie "The Butcher's Wife," even though she is supposedly from Ocracoke Island not Bald Head Island.