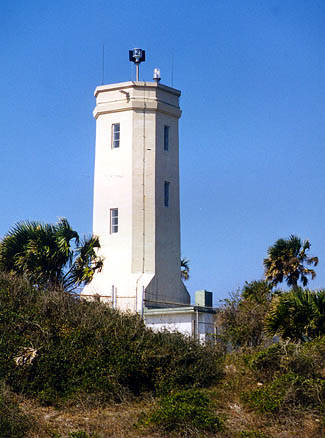 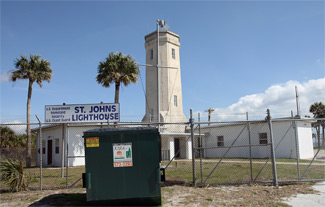 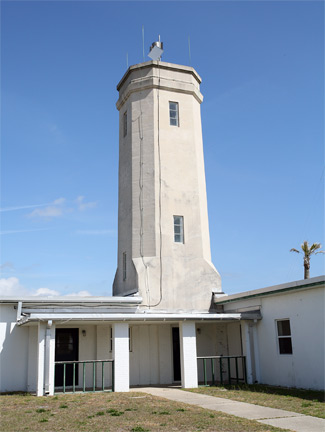 Naval Station Mayport covers 3,409 acres and is home to an aircraft carrier, twenty-one other naval ships, several helicopter squadrons, and two lighthouses. The oldest of the two lighthouses, St. Johns River Lighthouse, was active between 1859 and 1930 and is tucked away in the northwest corner of the station, 1.8 miles from the coast. The stations second lighthouse, St. Johns Lighthouse, is located right on the coast, about a mile south of the mouth of St. Johns River.

St. Johns River Lighthouse was replaced by St. Johns Lightship, anchored seven miles offshore. The lightship served for over two decades, but the expense of staffing and maintaining the floating light, led the Coast Guard to build the modern St. Johns Lighthouse, which replaced the lightship on October 1, 1954.

A square, sixty-four-foot-tall structure with beveled corners, St. Johns Lighthouse is an art deco tower constructed of concrete blocks and has never had a lantern room. Originally, the lens was shielded by a Plexiglas dome, but today the solar-powered beacon sits fully exposed atop the flat-topped tower. A unique feature designed into the lighthouse was a system of pulleys and wires used to lower the former optic into the tower, where it could be cleaned or repaired, and then raise it back atop the tower.

The lighthouse was automated in 1967, and the dwellings that used to house the coastguardsmen were turned over to the Navy. (The dwellings have since been demolished.) The two attached, one-story wings, which extend south and west from the base of the tower, are still used by the Coast Guard.

The tragic events of September 11, 2001 are one of the few instances where America has been attacked on her home soil. Another such attack, also planned by foreign infiltrators, was attempted during World War II. On June 17, 1942, four German saboteurs, carried across the Atlantic by a U-boat, came ashore just a couple miles south of St. Johns Lighthouse with a supply of explosives, primers, and incendiaries to be used in a two-year assault on American defense-related targets. The men buried their boxes of supplies in the sand, and then headed north to start planning the attacks.

Four days earlier, another team of four had landed on Long Island, New York. Fortunately, one of these men, George Dasch, had second thoughts and traveled to Washington D.C., where he turned himself over to authorities on June 19. Information gathered from his interrogation resulted in the arrest of the three remaining members of the Long Island group the following day in New York City. Two members of the Florida group were captured in New York City on June 23, and the remaining two men who landed in Florida were arrested in Chicago on June 27. No attacks were carried out before the arrests were made.

A trial, held during the following month, found all eight men guilty and sentenced them to death. Dasch had his sentence reduced to thirty years in jail, and Ernest Burger, another defendant, had his sentence commuted to life in prison. The remaining six were executed in an electric chair in the Washington, D.C. Jail on August 8, 1942. In April 1948, President Harry S.Truman granted clemency to Dasch and Burger conditioned on their deportation to American Zone of occupied Germany.

The presence of St. Johns Lighthouse and the large naval force at Mayport will hopefully keep that section of the coast safe for mariners and safe from any future attacks from the sea.

Located inside Naval Station Mayport almost one mile south of the entrance to the St. Johns River.
Latitude: 30.38621, Longitude: -81.398

For a larger map of St. Johns Lighthouse, click the lighthouse in the above map.

St. Johns Lighthouse is best viewed from within Naval Station Mayport, though it could also be viewed from the water, but I don't know how much of the surrounding water is controlled by the station. Since 9/11, access to the base is restricted to those with a military ID or with a sponsor on the base.

To get a decent view of the lighthouse from outside the base, from Florida A1A, go east on Wonderwood Drive toward the ocean to Kathryn Abbey Hanna Park. After paying an admission fee, drive into the park and follow the sign for "Parking Lots 1-5." Continue to Parking Lot 1, and then take the boardwalk toward the beach and look for the lighthouse to the north.