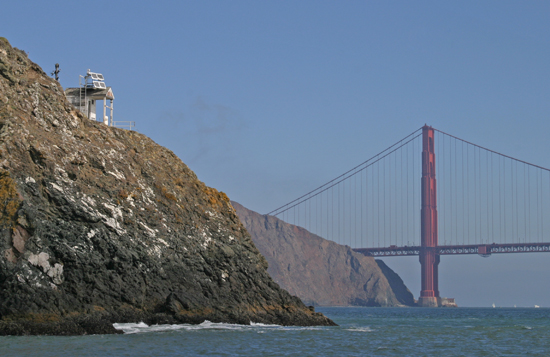 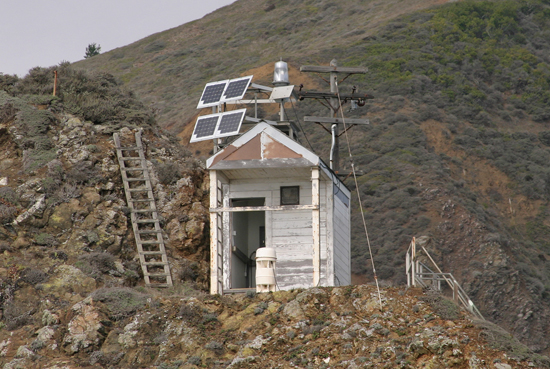 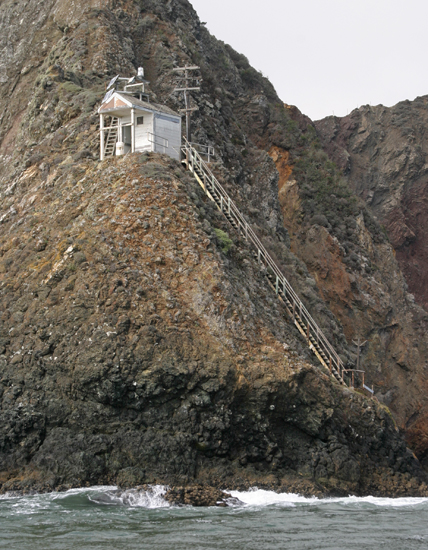 Point Diablo is located roughly midway between Point Bonita and Lime Point on the northern side of the Golden Gate. The point protrudes some 600 feet into the waters from the Marin Headlands, making the point, according to the Lighthouse Service, "a dangerous menace to vessels entering San Francisco Bay in foggy weather."

In 1923, the Lighthouse Service decided to mark this navigational hazard, and a small white shack with a pitched red roof was placed on the sloping point some eighty feet above the water. The structure housed two lens lanterns and a twelve-inch electric siren, for which the keepers at Lime Point were responsible. A telephone and electric line was strung to the point on poles, allowing the Lime Point keepers to listen-in on the semi-automated station. Still, the keepers were required to travel to Point Diablo weekly to clean the light and oil the fog signal.

An array of solar panels now powers the modern beacon positioned atop the shack. The light flashes every six seconds, and when necessary the fog signal alerts mariners to the presence of menacing Point Diablo.

Point Diablo is located about halfway between the northern end of the Golden Gate Bridge and Point Bonita, helping to mark the entrance to San Francisco Bay.
Latitude: 37.8201, Longitude: -122.4995

For a larger map of Point Diablo Lighthouse, click the lighthouse in the above map.

This light is best viewed from the water, although views can also be had from the coastal road in the Marin Headlands.

The lighthouse is owned by the Coast Guard but is in the process of being transferred to Golden Gate National Recreational Area. Grounds/tower closed.