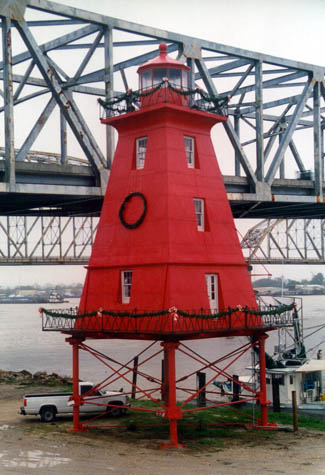 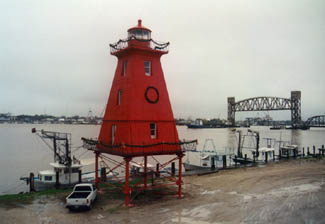 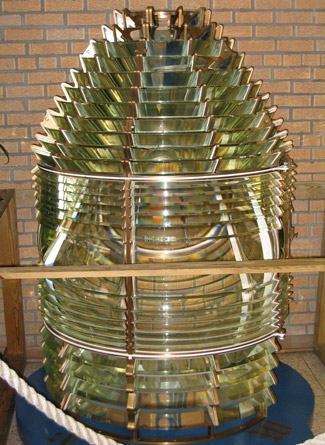 The region southwest of New Orleans is known as Louisianas plantation country. Before the advent of the railroad, a good portion of the plantation crops was floated down Bayou Teche, which led from New Iberia to Atchafalaya Bay. By the early 1800s, shipping traffic from the bay had increased to the point were navigational aids were merited.

Lightships proved to be expensive to operate and maintain, leading the Lighthouse Board to authorize the construction of Southwest Reef Lighthouse. On August 18, 1856, Congress appropriated $20,000 for a lighthouse "to serve as a substitute for the present Atchafalaya Bay light-ship, and also for the light-house at Point de Fer." The plans for the lighthouse called for a square, pyramidal tower constructed of iron plates surmounted by a lantern room. The tower was placed atop four vertical piles screwed into the shoal and contained the keeper's living space. A red light, produced by a fourth-order Fresnel lens and having a focal plane of forty-nine feet, was displayed for the first time on September 1, 1859. The first keeper, George Wright, was transferred from the Point Au Fer Lighthouse, which had been displaced by Southwest Reef Lighthouse.

The Confederates deactivated the lighthouse during its third year of operation, and it remained dark throughout the Civil War. Following the war, the Lighthouse Board noted that Southwest Reef Lighthouse had "sustained much damage from the rebels." Union forces discovered the lamps, lens, and plates of glass from the lantern room at St. Martinville. The items were returned to the tower during the summer of 1865, and the lighthouse, after being repaired and refitted, was reactivated on the sixth anniversary of its first lighting.

During January and February of 1867, the iron lighthouse, which had previously been red, was painted with coal tar, and black remained its daymark from then on. One must think that the lighthouse would have been unbearably hot during summer.

An unusually severe hurricane swept through Atchafalaya Bay in October of 1867, damaging the exposed tower. Although the station stood approximately ten feet above the high tide mark, the storm-tossed seas broke through the bottom of the dwelling and tore the gallery from the tower. The force of the waves bent the lighthouses iron legs. After the storm, repairs were completed at the station, and braces were placed diagonally between the piles for added strength.

On March 3, 1873, Congress appropriated $5,000 to elevate Southwest Reef Lighthouse to protect it from the seas and another $15,000 for a steam fog signal for the station. In 1875, the lighthouse was detached from its foundation and four, ten-foot-long cast-iron columns were bolted to the top of the existing foundation piles. The structure was then lowered back into place and bolted to the columns. Before this work, the bottom of the lighthouse was eleven feet nine inches above the water, so the buffer between the lighthouse and the bay was nearly doubled.

The fog signal building was built atop four hollow cast-iron screwpiles south of the lighthouse and was connected to it by a covered passageway. The twelve-inch steam whistle commenced operation on March 31, 1875, giving ten-second blasts followed by thirty seconds of silence when necessary. During the last year of its operation, the steam whistle was active for about 127 hours and consumed 26,830 pounds of coal.

In January 1889, the steam whistle was replaced by a 1,200-pound fog bell mounted in a pyramidal tower placed atop the old fog signal building. The bell was struck by machinery every twenty seconds during periods of low visibility. The bell tower was twenty-six feet high and measured eleven by seventeen feet at its base and six by twelve feet at its top.

Just before World War I, a channel was cut through Point Au Fer Shoal, creating a more direct route to the Atchafalaya River. Point Au Fer Reef Lighthouse was constructed next to the new channel on an island formed by the dredging operation. When the new lighthouse was activated on March 31, 1916, Southwest Reef Lighthouse was discontinued. For over seventy years, the abandoned tower slowly rusted away until the Atchafalaya Delta Tourist Commission, the town of Berwick and Save Our Coast joined together to bring it ashore in 1987. House Bill 1080 transferred ownership of the lighthouse from the state to Berwick, and the lighthouse was removed from its pilings on October 8, 1987. The tower was sandblasted and partially restored at the Berry Brothers General Contractors facility in Berwick before being moved to its current location in April 1990. The finishing touches were made to the lighthouse in July 1996, when doors and windows were installed and a replica lantern room was placed atop the tower.

Today, the tower stands on the western bank of the Atchafalaya River in Berwick in Everett S. Berry Lighthouse Park, named for the mayor during the relocation of the lighthouse.

Located in the town of Berwick near the intersection of Bellview Front Street and Canton Street on the water.
Latitude: 29.69412, Longitude: -91.21619

For a larger map of Southwest Reef Lighthouse, click the lighthouse in the above map.

From Highway 90 in Berwick near the west end of the bridge over Berwick Bay, exit and proceed east to the water. Southwest Reef Lighthouse will be at the water's edge south of the Highway 90 bridge.

The lighthouse is owned by the Town of Berwick. Grounds open, tower closed.


A Fresnel lens, of unknown origin, is located just west of Southwest Reef Lighthouses in Berwick Town Hall on Third Street. There is also a fog bell on display outside the offices. Progress has been made on the riverside lighthouse park since my first visit in 1998. As can be seen in this photo taken in April of 2003, the area beneath the lighthouse has been cemented in and several benches and planters have been added. Plans drawn up for the park include a museum that links Southwest Reef Lighthouse to Ship Shoal Lighthouse, which the town hopes to also bring ashore. It would certainly be a great lighthouse exhibit, and make these otherwise remote lighthouses readily accessible.