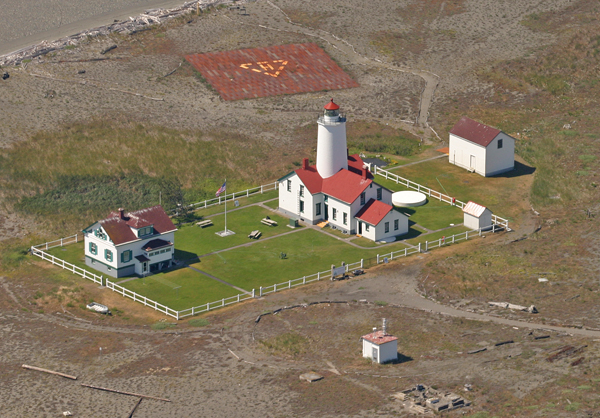 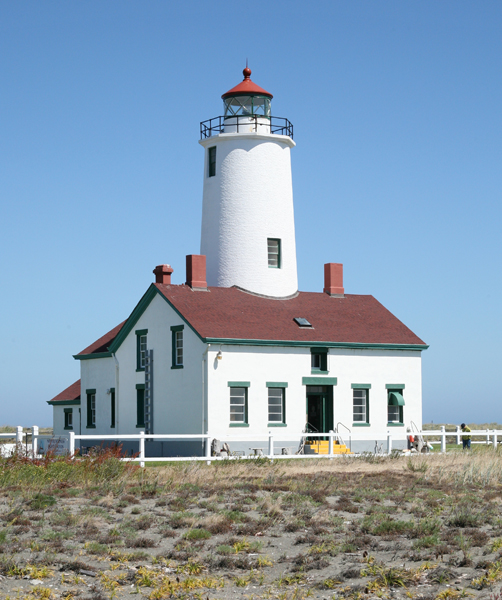 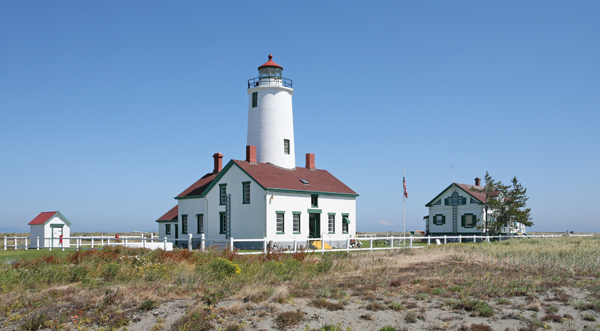 Shipwrecks, battles, and fires. New Dungeness Lighthouse has shined through them all. Over a century-and-a-half old, it still guides ships past its treacherous spit in the Strait of San Juan de Fuca.

New Dungeness Spit, a six-mile-long, flat sandbar barely visible from a distance, is one of the longest natural spits in the world. Captain George Vancouver named it New Dungeness in 1792 because it reminded him of Dungeness Point on Englands southeast coast, where a light has guided mariners since around 1600. Perhaps Vancouver imagined a light someday gracing New Dungeness as well.

Just over a half-century later, in 1849, the spit was designated as a site for a lighthouse, and on December 14, 1857, the light from New Dungeness Lighthouse, the second lighthouse established in Washington Territory, was exhibited for the first time using a fixed, third-order Fresnel lens. Thomas Boyling was hired as the first head keeper of the lighthouse, with Henry H. Blake as his assistant, but since Boyling hadnt arrived from San Francisco in time for the inaugural lighting, Franklin Tucker was temporarily placed in charge of the light.

The local customs collector questioned Tuckers ability to mind the light, saying, He promised to leave off his drinking and lead a sober life, which he has not done. Tucker must have changed his ways, as he would later serve as head keeper at New Dungeness, followed by stints at Cape Flattery and Point Robinson.

Twenty-one-year-old Henry Blake was a bachelor when he arrived at New Dungeness, but Mary Ann McDonnell, daughter of Richard McDonnell, soon caught his eye, and Keeper Blake would walk the lengthy spit to pay her visits until the couple wed in 1862. Blake replaced Boyling as head keeper in 1860, and Mary Ann served as her husbands assistant for five years, before they were removed from their positions in 1868.

The lighthouse was based on a design by Ammi B. Young and was built under the direction of Isaac Smith, who in parallel also supervised the work on a similar lighthouse at Cape Flattery. To encourage the completion of the lighthouses in a timely manner, Smith initiated a friendly rivalry between his two crews. The workmen at New Dungeness completed their work just two weeks before the men at Cape Flattery.

The original New Dungeness lighthouse was a one-and-a-half-story stone duplex built out of grayish-yellow sandstone with a tower rising from its pitched roof. The brick tower, which rose to a height of ninety-two feet, was equipped with a wooden stairway with five landings and had an unusual color pattern. The lower half of the tower was painted white, the top half dark lead, and the lantern room a bright red. The lighthouse was located one-sixth of a mile from the outer end of the spit, and an open-frame fog bell tower was erected on the extreme outer end of the spit where a 1,100-pound was sounded every ten seconds during thick or foggy weather.

Nicknamed Shipwreck Spit for a reason, New Dungeness Spit also has a long history as an Indian battleground, and the skirmishes didnt stop after the lighthouse commenced operation. Perhaps as a sign of gratitude for the light that also served as a guide to them, the Indians never molested the lightkeepers.

In September 1868, eighteen Tsimshiam Indians were camping near the lighthouse on their return trip to British Columbia after earning wages picking hops in the Puyallup Valley, when, in the dead of night, Clallam Indians attacked and slaughtered the entire party. Or so they thought. After being stabbed over twenty times, a pregnant woman played dead while they robbed her of her bracelets and rings and then crawled to the lighthouse for help.

Keeper Henry Blake and his wife Mary Ann took the woman in and treated her wounds. The Clallam Indians later returned, and after counting the bodies and coming up one short, followed the bloody trail to the lighthouse. There was a short standoff when Keeper Blake refused the Clallams demand to relinquish the woman, but fearing the military might be called in, the Clallams eventually left. The Blakes first three children were born at the lighthouse, and years later, when an Indian stopped at the lighthouse and said he was the child of the pregnant Indian the Blakes took in, the keeper told him that Richard Blake, who was just four at the time of the attack, was still living in the area. The massacred Tsimshiam Indians were buried on a branch of New Dungeness Spit that is now known as Graveyard Spit.

In 1872, the Lighthouse Board requested $8,000 for a steam fog whistle to replace the bell, which was considered almost if not quite useless as the station often experienced heavy surf that made it difficult to hear the bell. Funds were appropriated on March 3, 1873, and a twelve-inch whistle was soon in operation on the spit, 430 feet northeast of the lighthouse. The stations four cisterns were enlarged to supply water for the steam whistle, and a frame addition was constructed on the old stone dwelling to make room for a second assistant keeper that was assigned to the station. The fog bell remained on the spit until it was transferred to the just-built Point No Point Lighthouse in 1880, the same year mineral-oil lamps replaced the lard-oil lamps previously used in the lantern room.

A wooden tramway was constructed in 1875 to connect the stations boathouse with the dwelling and fog signal building. A handcar ran along the tramway and facilitated the transport of supplies, including the roughly thirty tons of coal that were consumed by the fog signal each year.

In 1895, the Lighthouse Board noted the following in its annual report:

The dwellings erected at this station are arranged for the accommodation of two families and one single man; but as there are four keepers employed, and sometimes three of them with families, there is insufficient accommodation and a new dwelling is urgently needed. The estimated cost of a suitable building, cistern, outhouse, etc., for this station is $4,000.

The Lighthouse Board repeated its request each year until an act appropriated $5,000 on April 28, 1904 for constructing a new dwelling for the station. Work on the structure commenced in November 1904, and the dwelling was completed in January 1905. A new wing was added to the stone lighthouse in 1906. A new fog signal building was added to the station in 1907 to house two twenty-five-horsepower oil engines and air compressors that operated duplicate, six-inch sirens. The siren kept the same pattern as the whistle, sounding a six-second blast, followed by twelve seconds of silence, a three-second blast, and thirty-nine seconds of silence each minute. A diaphone fog signal replaced the sirens in 1937 and served until 1976.

On April 7, 1861, an earthquake shook the lighthouse. This may have contributed to the tower developing structural cracks that forced the removal of the upper thirty feet of the brick tower in September 1927. With the new tower dimensions, the original lantern room was too large for the tower, and it was replaced by the lantern room from the decommissioned Admiralty Head Lighthouse. This series of photographs (1, 2, 3, 4 ), shows the tower being dismantled and capped with the new lantern room. The remodeled tower was painted white from top to bottom, the same as it appears today, and a revolving fourth-order, Barbier & Benard Fresnel lens, which produced a white flash every five seconds, was installed in the lantern room.

The keepers on the spit were dependent on rainwater stored in the stations cisterns until an artesian well was drilled in 1930. Due to climatic changes, the spit had become one of the driest spots near Puget Sound, and since the recent addition of modern plumbing and sanitary systems, the stations water supply was insufficient. A six-inch casing was driven to a depth of 400 feet, and drilling continued to a depth of 665 feet, where a clay bed was penetrated and a water-bearing strata encountered. The well was capable of delivering eighty gallons of water each minute with a head of about eighteen feet.

In 1933, a 12,500-foot-long submarine cable was laid across New Dungeness Bay to provide the station with commercial power. The electrification of the station also included the construction of a transformer house at the station and the installation of equipment. The total cost of the project came to $13,100.

The chapter currently leases the station from the Coast Guard and manages a program where volunteers stay at the lighthouse for a week, maintaining the structure and greeting visitors. The program has proven so popular that the reservation waiting list is often two years long.

On the evening of July 11, 1999, a volunteer keeper was watching the sunset from the lantern room when he noticed what he called a ground forest fire moving toward the station. The Coast Guard, fire department, sheriffs department and Lighthouse Society were all quickly alerted. The volunteer turned the lawn sprinklers on and set them near the helicopter pad, the spot the fire would reach first. Those actions saved the lightstation, as the sprinklers caused the fire to fork and go around the station. The fire reconnected forty feet east of the main keepers house. Every building incurred smoke damage, but none was destroyed.

This wasnt the first time fire had threatened the lighthouse. In 1923, Keeper Edward A. Brooks, and Anders G. Berner, his assistant, helped fight a fire which destroyed the power house at the nearby naval radio compass station that had been established on the spit in 1921 to help mariners determine their location.

New Dungeness Lighthouse is now located in the Dungeness Wildlife Refuge. The refuge is haven to more than 250 species of birds, forty-one species of land mammals, and eight species of marine mammals. No matter which route you take to the lighthouse, walking, kayaking or boating, there is sure to be plenty of wildlife  and a friendly volunteer keeper waiting to greet you.

For a larger map of New Dungeness Lighthouse, click the lighthouse in the above map.

From Highway 101 in Sequim, take the Seqim Avenue exit and go north on Sequim Avenue which will become Sequim Dungeness Way and follow it to its end. From there you can get a view of the lighthouse at the end of the spit across Dungeness Bay.

To spend a week at the lighthouse, you must be a member of the New Dungeness Chapter of the U.S. Lighthouse Society. Two or three couples (or some combination of 4-6 adults and a few children) serve as keepers each week. Children must be six years of age or older. The duties required of the keepers include giving tours of the light tower (74 steps), mowing the lawn, and minor upkeep duties. To check availability and to download an application form, visit the membership page for New Dungeness Lighthouse.

If the hike seems a little too long, you can always kayak to the lighthouse. When the conditions are right, it is an easy paddle out to the lighthouse, but be very aware of the tides and weather.

The lighthouse is owned by the Coast Guard and managed by the New Dungeness Light Station Association. Grounds/tower open, dwelling used by volunteer keepers.


During your visit, be sure to sample some of the water from the station's artesian well. It will leave a lasting impression.