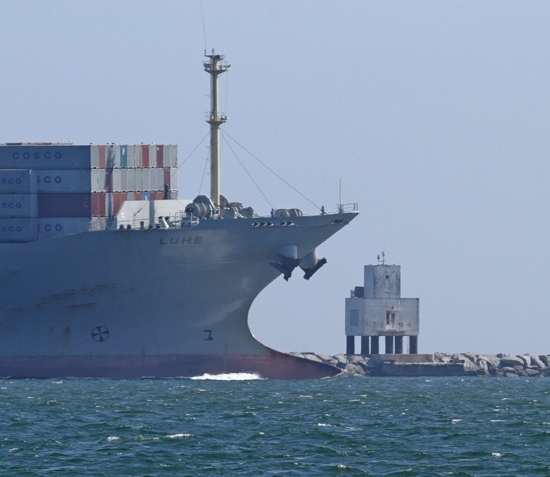 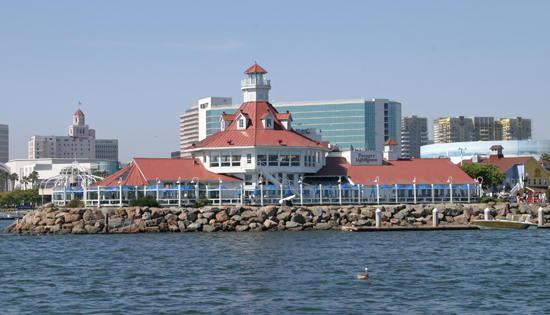 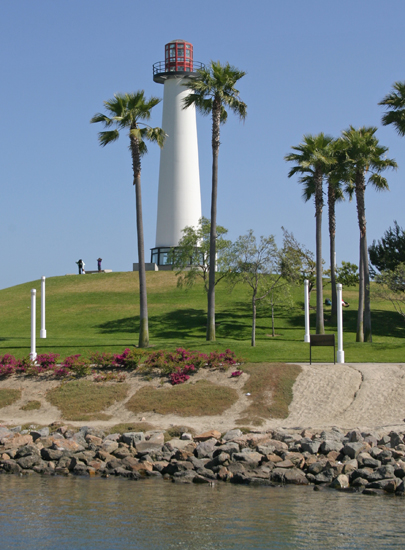 The Port of Long Beach is located adjacent to the Port of Los Angeles, and if you combine the number of cargo containers shipped through the two ports, they rank as the third busiest container cargo port in the world after Hong Kong and Singapore.

The Port of Long Beach is the second busiest container seaport in the U.S., bested only by Los Angeles. Long Beach also comes in second after Los Angeles in another category, its lighthouse. Long Beach Harbor Lighthouse surely must win the award for California's ugliest lighthouse. The three-story, monolithic structure rests on a base of six columns and was built of concrete to withstand earthquakes and seismic tidal waves.

When completed in 1949 at a cost of roughly $200,000, the lighthouse was hailed as the world's most modern and a forerunner of what was to come in the way of automated aids to navigation. The lighthouse was originally equipped with a rotating airway beacon, mounted on its roof, and was controlled by an astronomical clock that would compute the sunset and sunrise times each day and turn the light on and off accordingly. To avoid the possibility that the beacon could concentrate the sun's rays and melt its lamps, the light rotated continuously.

The Guy F. Atkinson Company built the lighthouse structure at a cost of $82,000, while Chief Electrician's Mate John T Hendix designed and built most of the station's equipment with the help of civilian electrician Chester Shey.

The lower floor of the tower originally held two gasoline generators that automatically relieved each other at twelve-hour intervals, and if one happened to fail, the other one would be activated. Current from the generators operated the light and a radiobeacon. Also located on the same floor, were two gasoline-powered air compressors for sounding seventeen-inch Tyfon foghorns, which the keepers at Los Angeles Harbor Lighthouse, five miles away, activated by radio. Also known as the robot light, the lighthouse replaced an earlier skeletal tower shown in the top historic photograph. Once the new light was activated, the skeletal tower was moved across the harbor entrance to mark the western side of the channel into Long Beach Harbor.

If the looks of Long Beach Harbor Lighthouse are not enough to entice a visit, there are also two attractive faux lighthouses located in Long Beach Harbor. The middle picture shown to the left is Parkers' Lighthouse Restaurant, and the bottom picture is Lions Lighthouse for Sight, which was made possible largely through funds raised by the local Lions Club.

Located at the eastern end of the detached breakwater which extends across much of both the Los Angeles and Long Beach Harbors.
Latitude: 33.72322, Longitude: -118.1868

For a larger map of Long Beach Harbor Lighthouse, click the lighthouse in the above map.

This light is definitely best viewed from a boat. Various vessels in Long Beach's Rainbow Harbor offer harbor cruises that may pass by Long Beach Harbor Lighthouse. Good views can also be had from ferry boats to Catalina Island that depart from near the Queen Mary in Long Beach.

The best point from which to view the light from land, and admittedly this view isn't all that great, is at the end of Pier F in Long Beach Harbor. The end of Pier J would offer a good view, but unfortunately it is not open to the public. To reach Pier F, take Interstate 710 to downtown Long Beach and follow the spur which goes over the harbor and to the Queen Mary. Once you cross over the harbor, look for signs, which will guide you to Pier F.