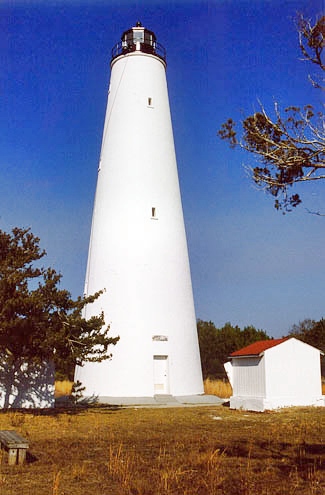 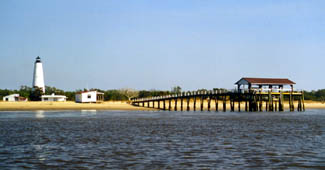 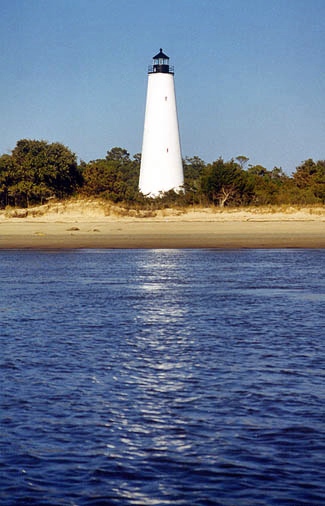 Georgetown, named in honor of Englands King George I, became an official port in 1732, and by the time of the revolution was an important center of commerce. Acres of cypress swamps were cleared and over 780 miles of canals were dug in the area, creating the second largest rice cultivation culture the world has known. Another important cash crop also raised at Georgetown was indigo, used to make a blue dye. The history of these important crops is told in the Rice Museum, located in the Georgetown Historic District. Ships trading in these commodities reached Georgetown by passing between the appropriately named North and South Islands to enter Winyah Bay and then continuing another fourteen miles upstream. In 1789, Revolutionary War Patriot Paul Trapier donated a tract of land on North Island for the establishment of Georgetown Lighthouse. However, the newly formed Lighthouse Service did not take immediate advantage of the offer, and another decade passed before construction began on the lighthouse.

On February 21, 1795, $5,000 was appropriated for a lighthouse near the entrance of the harbor of Georgetown. This sum was carried into the surplus fund, and another appropriation of the same amount was made on March 19, 1798 along with an additional $2,000. A seventy-two-foot, pyramidal tower, constructed of cypress wood, was finished in the early part of 1801, during the final days of John Adams presidency. Besides the tower, a two-story keepers dwelling was built along with a tank for holding the whale oil that fueled the lighthouses lamp. The wooden towers life was cut short by a violent storm in 1806.

Congress appropriated $20,000 on February 10, 1807 to rebuild the lighthouse in such a manner to secure its future safety. This sum was carried into the surplus fund before it was used, forcing the same amount to be reappropriated on February 26, 1810. This time the tower was constructed of brick, greatly reducing the chance that a gale would topple the lighthouse. A marble plaque positioned above the lighthouses door records the names of those who built the tower and lists 1811 as the year it was completed. Thomas Walker and James Evans, contractors from Charleston, were responsible for constructing the lighthouse, and they reportedly used slave labor. The staircase that spirals upward inside the stout brick tower is made of stone.

In 1850, eleven lamps and a corresponding number of fourteen-inch reflectors were being used to produce a fixed white light. A fourth-order Fresnel lens replaced the antiquated lamp and reflector apparatus in 1854, while retaining the same light characteristic.

After the Civil War broke out, the Confederates used Georgetown Lighthouse as a lookout station until Union forces captured it in May 1862. The lighthouse was heavily damaged during the North-South conflict, and as part of the post-war repair work, the tower was heightened to eighty-seven feet. This work was carried out in 1867 and included the installation of a new lantern room and a new fourth-order lens. At the same time, a new two-story dwelling, measuring twenty-four by twenty-six feet, was built for the keeper along with a cistern and boathouse.

On the night of August 31, 1886, Keeper Daniel J. Knight of Georgetown Lighthouse was upstairs in bed when he heard a sound like thunder coming from the east. He jumped from bed and looked out the window, thinking it was a storm, but there wasnt a breath of wind. Before he had time to think what it could be, the house started to shake violently. A clock in the dwelling stopped at 9:57 p.m., the time of the first of eight shocks that were felt during the next several hours. What the keeper experienced was the Charleston earthquake of 1886, and though it caused severe damage and took around 100 lives in Charleston, the quake caused only minor damage on North Island.

In 1909, a keepers dwelling was built on South Island for a keeper responsible for attending lights there. In December 1915, Charles F. Johnson, who was serving as keeper on South Island, shot himself with a revolver. Johnson had been suffering from tuberculosis of the throat and had recently been unable to swallow food. He had made several threats to take his own life and a few days before had selected his own casket. The following year, in 1916, it was decided to consolidate the stations near Georgetown, and the relatively new dwelling on South Island was moved one-and-a-quarter miles across Winyah Bay to North Island. The following description of the relocation was published in the Lighthouse Service Bulletin:

The frame dwelling, 51 by 56 feet in plan, one and one-half stories high, with two brick chimneys, and piazza on all four sides, weighing 115 tons, was rolled 500 feet on skids to a trestle out in the water arranged to span two lighters. Hand-power cotton screws were used to force the dwelling along. The lighters were placed in position at ebb tide, and at flood tide the building was lifted clear of the trestle and was towed across the bay by the tenders Snowdrop and Water Lily to a similar trestle on the North Island side, the tender Mangrove assisting. From this point the dwelling was rolled 400 feet to the new site on the Georgetown reservation. The keepers family occupied the dwelling during the operation. The kitchen was brought over separately in the same manner, and neither structure suffered any damage.

A Georgetown Times newspaper article, dated December 29, 1933, reported that Head Keeper Joseph W. Grisillo had been found dead setting in a chair inside his keepers dwelling. The sheriff and coroner were immediately dispatched to the island to investigate the matter, and the coroner ruled that Grisillo had come to his death through natural causes. A native of Austria, Keeper Grisillo had served as assistant keeper at Hunting Island, Cape Romain, Tybee Island, and Charleston before being appointed head keeper at Georgetown around 1920. His family lived in Charleston most of the time he was at Georgetown Lighthouse so his children could attend school.

Keeper Gabriel Jackson, who was in charge of river lights near Georgetown was traveling in a boat with assistant keeper George C. Ellis of Georgetown Lighthouse, when on November 5, 1938 an explosion rocked the craft the pair was traveling in on Winyah Bay. Both men jumped overboard at the first explosion. Ellis, unable to swim, held on to a wood plank, but he eventually lost hold and drowned. His body was never recovered. Jackson had drifted about two miles in the water when he was finally picked up after two hours by a towboat out of Georgetown. Keeper Jackson received burns over ninety percent of his body and was hospitalized for just over a month before he was able to return to the lighthouse.

The lighthouse remained a family station until a fire in 1968 destroyed the two keeper's dwellings. After this, the light was manned by a rotating Coast Guard crew. In 1983, Petty Officer Steve Cropper was in charge of the lighthouse and told of two unusual occurrences during his time at the lighthouse. In December 1980, the coastguardsmen at the lighthouse noticed a shrimp trawler passing the station without running lights that was riding low in the water. The crew radioed ahead, and the boat was intercepted and found to have more than twelve tons of marijuana on board. Another time, two men and a woman were sunbathing au naturel on the other side of the island. When it was time to leave, the men couldnt get the boat started and drifted away from the island, leaving the woman alone. Left without a stitch of clothing, the woman was forced to go to the lighthouse for help. I looked up the beach and here comes this woman completely nude running down the beach, Cropper related. I didnt know what to think.

Georgetown Lighthouse is the oldest lighthouse in South Carolina and was the last lighthouse in the state to be destaffed. In 1986, the light was automated and its six-person crew reassigned. Two years later, the seven-acre site was leased to the Department of Juvenile Justice, who used the facility for a marine institute rehabilitation program for juvenile offenders. The program was discontinued after a short period due to maintenance difficulties.

As stipulated in the will of former Boston Red Sox owner Tom Yawkey, South Island and all of North Island, save the lighthouse acreage, were bequeathed to the South Carolina Heritage Trust in 1976, creating the Tom Yawkey Wildlife Preserve. In 2001, the lighthouse property was added to the preserve. Georgetown Lighthouse is listed on the National Register of Historic Places, and with it now under state control, the tower will hopefully be restored and one day opened to the public. In addition to the lighthouse, an 1890 oil house, brick cistern, and more modern Coast Guard structures remain standing.

Located on North Island on the northern side of the entrance to Winyah Bay from the Atlantic Ocean. The lighthouse is about 12.5 miles from Georgetown.
Latitude: 33.22267, Longitude: -79.18511

For a larger map of Georgetown Lighthouse, click the lighthouse in the above map.

The lighthouse is best seen by boat. During the summer, Rover Tours and Cap'n Rod offer trips from Georgetown that stop at Georgetown Lighthouse.


We visited this lighthouse with Capt'n Sandy. After boarding his boat at the Esterville Minim Creek Canal, we soon entered Winyah Bay, and traveled southeast for about five miles to reach the lighthouse. Along the way, Capt'n Sandy pointed out the fish nets stretched out to capture unsuspecting red drum fish, valued for their roe, and stopped to allow us to get a good view of a pair of bald eagles. I highly recommend a trip with Capt'n Sandy, and if you go, be sure and ask him to recount the story of Lighthouse Annie. Captain Sandy is a master storyteller, you can click here to read a very short version of the tale, but you really do need to hear the full-length story related by the captain as you pause in the waters near the lighthouse. A lighthouse adventure with Capt'n Sandy can be scheduled by calling (843) 527-4106.