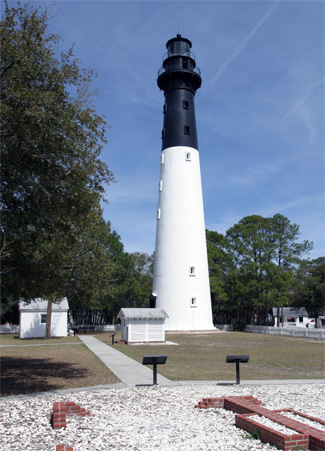 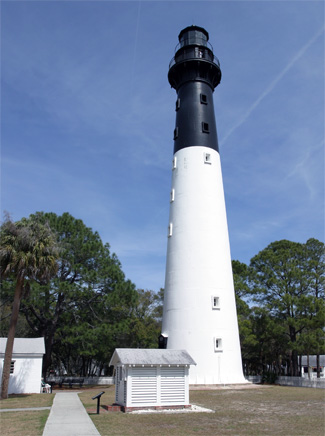 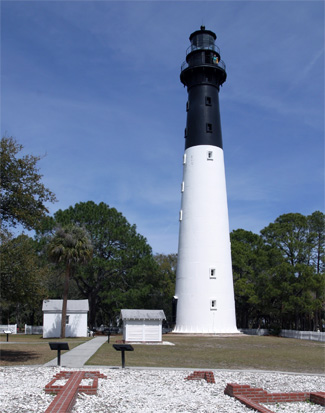 In 1853, various merchants, planters, and owners of vessels in South Carolina petitioned the federal government for new aids to navigation and alterations in existing ones. One of their requests was the establishment of a light-house and corresponding beacon-light in the stead of the St. Helena light-ship, on the northern end of Hunting island, to range for the Swash channel. As Hunting Island was situated roughly thirty-five miles from the coastal lights at Charleston to the north and on Tybee Island to the south, a major light there would help fulfill the goal of having no dark voids along the coast.

Congress appropriated $30,000 for the lighthouse and beacon light on August 3, 1854. This sum was expended in 1856 and 1857, but it wasnt until March 8, 1859 that the following official Notice To Mariners was published by the Lighthouse Board:

Notice is hereby given that at sundown on Friday, the 1st day of July next, the new light-house and beacon on the north point of Hunting island, S.C., will be lighted, and will be kept burning during that night and every night thereafter from sunset to sunrise.

The main light-house is a conical tower built of reddish gray brick, the upper 25 feet of which will be colored white. The tower is surmounted by a brass lantern.

The illuminating apparatus is a lens of the second order of the system of Fresnel, showing a revolving light of the natural color, the interval between the flashes of which is 30 seconds. The tower is 95 feet high, and the focal plane is 108 feet above the level of the sea. The light should be visible in clear weather a distance of 17 nautical miles.

The beacon light is an open-work wooden frame, painted white, 32 feet high. The focal plane is 39 feet above the level of the sea. The illuminating apparatus is a lens of the sixth order of Fresnel; showing a fixed light of natural color.

Hunting Island Lighthouse was activated on the prescribed date, with Anton Johnson serving as the first head keeper and two assistants serving under him. The latitude and longitude provided as part of the notice place the lighthouse nearly two miles off the northern end of Hunting Island, given its shoreline in 2000.

Obviously, the original Hunting Island Lighthouse is no longer standing, but its demise was not due to the advancing ocean but rather to a retreating army. Confederate forces blew up the lighthouse in 1861 to hinder the approach of the Union fleet before the Battle of Port Royal.

Plans for a new tower were made a few years after the war, and Congress awarded $30,000 on June 10, 1872 to start its construction with the stipulation that it be on land owned by the government. A survey of the northern end of Hunting Island made in 1872 by the district engineer found that about a half mile of shoreline had been lost during the previous three years. This rapid rate of erosion prompted the Lighthouse Board to request an additional $50,000 so an iron lighthouse, capable of being relocated, could be built. Congress appropriated this additional amount on March 3, 1873, and a construction crew was dispatched to the island shortly thereafter to construct a temporary wharf and quarters for the workmen.

Due to the unhealthiness of the climate, the work had to be suspended during the warm summer months and did not resume until the spring of 1874, when an eight-foot-thick concrete foundation was laid and the first three courses of the iron tower were bolted in place. Work stopped at the end of June and did not resume until November. The 121-foot-high lighthouse was finished in early June of the following year, and the lights characteristic white flash every thirty seconds was exhibited for the first time on July 1, 1875. The metallic shell, manufactured by Phoenix Iron Works of Philadelphia, Pennsylvania, was lined with bricks and capped with a second-order Fresnel lens.

Ditches were dug to drain a freshwater pool near the lighthouse, believed to be the main cause of the unhealthiness of the station, and Eucalyptus seeds were planted. Eucalyptus trees were thought to neutralize the effects of malaria at the time, but it was only later discovered that they did so by drying up the surrounding land and thus eliminating mosquito breeding grounds. It wasnt until 1897 that a British surgeon working in India proved that malaria was transmitted by mosquitoes.

On March 3, 1875, Congress provided $10,000 for building a keepers dwelling and protecting the site. During construction of the lighthouse, over 400 feet had been lost from the tip of the island, but it was thought that the tower, located nearly a mile to the south, would be safe indefinitely if a couple of log jetties were put in place. A head keeper and two assistants were assigned to the station, and the spacious two-and-a-half story dwelling was completed on May 1, 1876 to house the whole lot. The dwelling measured sixty-three by thirty-eight feet, and had twelve rooms. Cisterns with a capacity of $7,000 gallons were built to store water for the station.

At 9:50 p.m. on August 31, 1886, the effects of the Charleston earthquake were felt at the station. It was easy to note the exact time, as the clock in the lighthouse was stopped by the tremor. The first shock, which lasted for about four minutes, was so strong that a bucket that was half full of water on the top landing in the tower was nearly drained. The two assistants atop the tower couldnt stand up without holding onto something. One assistant was outside on the gallery and was thrown back and forth between the railing and the tower. The stations chickens were shaken from their perches and ran out of the coop in seemingly great terror.

In 1886, a stone jetty was constructed on the beach near the station using a $5,000 appropriation made by Congress the previous year. The jetty worked well until a storm in August 1887 swept most of it away and brought the ocean to within sixty feet of the dwelling and 152 feet of the tower. The Lighthouse Board urgently requested $51,000 to purchase a new site and move the stations structures, and Congress responded with the desired sum in April 1888. A heavy sheet-pile revetment, 200 feet long and with retreating wings at each end, was built along the beach to secure the old site until the move could be made. A temporary tower topped by a fourth-order light was put into operation on February 1, 1889 to serve mariners while the second-order light was out of commission.

Over a period of six months in 1899, lasting from March 18 until September 13, the lighthouse was dismantled, transported along a tramway, and then reassembled 1 ¼ mile farther inland. During the summer months, the workers were suffering from malarial fever but still prosecuted the work with vigor. The lighthouse was relit on October 1, 1889, and the temporary light discontinued. The exhausted workers were taken to Charleston in September to recover but returned in November to rebuild the keepers dwelling, whose pieces they had already moved to the new site, and erect a new oil house. The station was once again whole on March 22, 1890. The relocation cost $51,000, exactly half of the construction cost fourteen years earlier.

During the hurricane of 1893, the 272-foot steamship City of Savannah I was grounded on shoals off Hunting Island. Men on board lashed themselves to the masts, while a dozen women and children were placed in two lifeboats and rowed ashore through the heavy surf. After the terrifying ride to the island, they waded through waist-deep water to reach the protective confines of the lighthouse where they safely waited out the storm. After thirty-six hours lashed to the rigging with nothing to drink and just raw turnips for food, the men were finally rescued by the steamship City of Birmingham.

Hunting Island received its name because it was once used for hunting deer, raccoon, and waterfowl. The keepers and their families likely enjoyed the abundance of wild game, but they also raised hogs, chickens, and turkeys and tended a garden as well. Oil and supplies were brought to the island by boat, off-loaded at a wharf on Johnsons Creek, and then transported along a 3,000-foot tramway to the station. The oil was stored in the fireproof oil house, while other items were placed in two outbuildings near the dwelling. Each of the outbuildings had a small attached room that served as an outhouse. For drinking water, a gutter system collected rain from the roof of the dwelling and transported it to a cistern for storage.

In 1933, a lighted whistle buoy was placed offshore, and Hunting Island Lighthouse was deactivated. The U.S. Senate passed a bill in August 1937 transferring the lighthouse reservation to Beaufort County for use as a park or game preserve, and the following year South Carolina acquired the island from Beaufort County and converted into a state park. At this time, the keepers dwelling was used to house workers from the corps of engineers, who were tasked with building bridges to the island and making other improvements. Reportedly, a lantern was knocked over during a card game being held by the workers on June 9, 1938, and the keepers dwelling burned to the ground. The bridges were opened in 1941, allowing visitors to drive across the intervening sea islands to reach Hunting Island.

The foundation of the keepers dwelling was uncovered in 1995 and then capped with modern red bricks so visitors can see its outline. That same year, the tower was activated as a private aid to navigation.

Hunting Island Lighthouse is the only historic lighthouse in South Carolina that is officially opened to the public for climbing. However, this changed in 2003, when cracks were discovered in several steps of the towers circular stairway. The cracks were repaired in 2004, and metal braces were placed beneath each tread. The steel-gray braces were left unpainted so they can readily be identified as additions to the black, cast-iron stairs. On February 18, 2005, visitors were once again allowed to climb to the top of the tower and enjoy the glorious view of the wooded island and expansive ocean.

In 2018, Bennett Preservation Engineering completed an assessment of the lighthouse that noted cracks in the brick masonry and corrosion of the cast iron, especially at the watch level and lantern level. In response to the study, the state has planned a $3 million restoration of the tower. Until funds can be secured and the work carried out, only six visitors are allowed in the lighthouse at a time.

The Atlantic continues to claim several feet of Hunting Islands sandy shore each year. Currently, the tower stands 400 feet from the shoreline at high tide. If erosion continues at its present rate, the lighthouse might need to be moved yet again.

For a larger map of Hunting Island Lighthouse, click the lighthouse in the above map.

From Beaufort, travel 16 miles east on Highway 21 to Hunting Island State Park. Once on the island, take the second entrance to your left where you will need to pay an entrance fee. Ask directions to the lighthouse, which is just a short drive away. South Carolina State Parks announced in February 2022, that the lighthouse would be closed indefinitely due to deterioration of stairs and railings. Call the Hunting Island State Park at (843) 838-2011 to confirm the schedule or for more information.