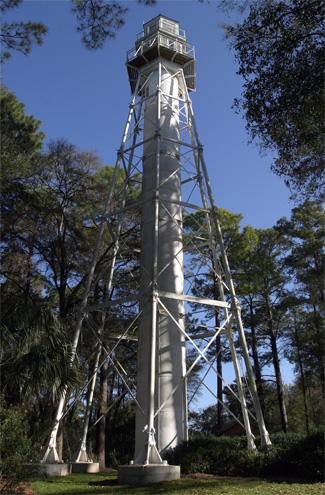 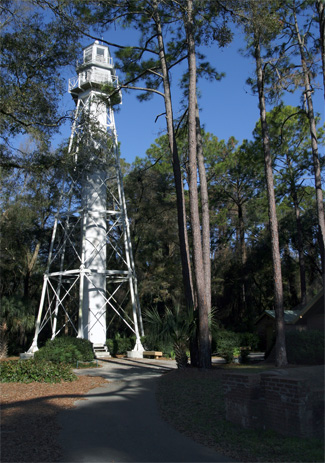 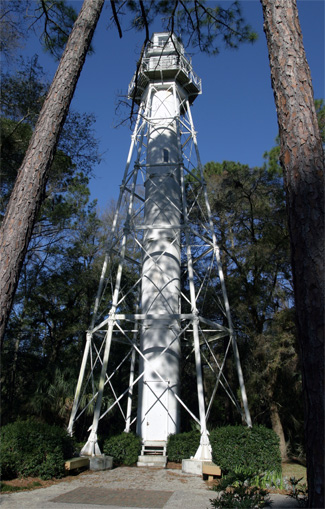 Captain William Hilton, sailing aboard the Adventure for King Charles II of England, entered Port Royal Sound in 1663. On his chart of the area, Captain Hilton marked the island, located on the southern side of the entrance to the sound, Hiltons Head due to a high bluff on the northern end of the island. The name stuck, though it was altered slightly to Hilton Head. Although the faux lighthouse at Harbour Town, on the southern end of Hilton Head Island, is more widely known, Hilton Head Rear Range Light is the islands one true lighthouse. As the lighthouse stands on ground that was once part of Leamington Plantation, the tower is also known as Leamington Lighthouse. Surrounded by tall pines and located in the middle of a golf course roughly a mile from the Atlantic, the lighthouse remains unseen by most visitors to the popular vacation and golf island.

In 1853, various planters, merchants, and owners of vessels in South Carolina petitioned the federal government for a light-house and a corresponding beacon-light for Port Royal entrance, to be located in the neighborhood of Hilton Head. Congress appropriated $10,000 on August 3, 1854 for a lighthouse and beacon light to be built on or near Hilton Head. Nearly $3,000 was spent during 1856 and 1857 trying to obtain title to the desired land, but the remaining amount was eventually transferred to the surplus fund and the project abandoned.

After the Union had gained control of Hilton Head during the Civil War, Congress appropriated $7,000 on March 3, 1863 for a series of range lights as aids to navigation at Port Royal Harbor. The structures to support the lights were built at Portland, Maine and then shipped south to Port Royal. A pair of range lights was established on Hilton Head and a single light on Bay Point, while a lightship was anchored on Fishing Rip. A detail of Union soldiers was assigned to open up a vista to the rear range light on Hilton Head, and the admiral of the South Atlantic Gulf squadron provided a suitable vessel to the Lighthouse Board to serve at Fishing Rip. After nearly six years of use, the range lights on Hilton Head were discontinued in 1869, reportedly after being destroyed by a storm.

On July 31, 1876, Congress authorized the expenditure of $40,000 for range lights on Hilton Head and Bay Point to guide vessels into Port Royal Sound. After a lengthy squabble over land rights, contracts for the work were finally made in 1878 with a completion date of June 1, 1879. The contractor for the front light and the dwellings for both the front and rear light failed to start the work, resulting in the contract being turned over to his bondsmen and the deadline being extended to May 1, 1880. Both lights and dwellings were completed in June 1880, but the Lighthouse Board decided to delay activation of the lights until August 1, 1881, when the range lights on nearby Parris Island would be finished.

The front light at Hilton Head was exhibited from a lantern room mounted atop a short, square tower protruding from the roof of the keepers dwelling, while a ninety-five-foot-tall iron tower served as the rear light. The following description of the rear tower was provided by the Lighthouse Board: The tower is a skeleton structure made up of five series of iron columns, braced and tied together by means of beams and tie-bars, together forming the outline of a regular hexagonal pyramid with a central cylinder inclosing the axis of the pyramid. The first series of columns are fitted into foundation discs, which rest on a concrete foundation 6 feet in thickness and are bolted down to the same. On the top is built an inclosed watch-room and lantern, which will be fitted with a reflector light.

The lantern and watchroom atop the rear light were originally built of cypress wood, and were reached by climbing 112 steps housed in the towers central column. The rear light was located a mile and a quarter inland from the front light. By positioning their boats so that one light was positioned atop of the other, like the sites in a gun, captains knew their ship was in the proper channel.

The range lights were originally fixed red, but on February 1, 1883, the front light was changed to fixed white. By 1884, the channel into the sound had shifted south, creating the need to realign the lights. Rather than move the front keepers dwelling with its light, a mobile front range light, which stood thirty-one-feet tall, was constructed to track the shifting channel. The front range light had to be relocated farther south in 1887 and another swath of trees cut down between the two lights. This move placed the front beacon at the southern end of the lighthouse reservation, and the Lighthouse Board recommended that additional land be purchased so the light could be moved even farther south. Congress provided $1,000 in 1891 for expanding the reservation, and the front range was moved seventy-three feet southward that year. A brick oil house, measuring nine by eleven feet and capable of storing 450 five-gallon cans, was built near the rear tower in 1892.

On the night of August 31, 1886, the powerful earthquake that struck Charleston was felt at the range lights. Head Keeper Robert A. Sisson, who lived at the rear light with his family, was in bed when the first shock was felt at 9:44 p.m. The doors and windows in the dwelling rattled, and Sisson reported that the whole structure shook and heaved like a small boat in a heavy sea. The keeper and his family rushed out onto the porch in case the house fell in and reported that before each shock there was heard a rushing sound like the distant boom of large guns. The shaking lasted about a minute, and the light atop the tower was observed to repeatedly flash up bright and then die down during this time. The assistant keeper at the front light said that he and his wife thought the small tremor they felt was the ghost of a former assistant, who lies buried near the house, and that he was giving them a shaking up. Keeper Sisson said he didnt think his neighbors on the island noticed the quake, as the sea island colored folks are very sound sleepers.

Hilton Head Range Lights come complete with a Southern tradition, a resident ghost. A fierce hurricane in 1898 didnt prevent Keeper Adam Fripp from tending to his light. In a driving rain, Fripp made his way to the oil house, and then to the tower and up the spiral staircase. Just as he reached the top, a powerful gust of wind shattered one of the glass panes in the lantern room. The strain of the ascent coupled with the shock of the exploding glass was more than Fripps heart could handle. Hours later, his daughter Caroline noticed her fathers prolonged absence and went in search of him. Wearing a long blue dress, Caroline climbed the tower where she discovered her dying father. Fripp implored his daughter to keep the light burning no matter how dangerous the storm. Caroline was faithful to her fathers final wish, sloshing through hip-deep water to replenish the lamps with oil. Several days passed before anyone made it to the island to check on Fripp. Caroline managed to tend the light throughout the storm, but her sorrow and exhaustion proved too much, as she died shortly thereafter. Since that time, sightings of a girl in a blue dress near the tall skeletal tower have been reported on dark rainy nights. (Lighthouse records dont show a Keeper Fripp as ever having served at the lighthouse.)

In January 1897, the front beach light was again moved farther southward and ten acres of dense woods were cut down to clear the range line. Under an appropriation for national defense made during the Spanish-American War, the station was connected by telephone to the Port Royal Naval Station in 1898. A storm in October 1898 cut away the beach in front of the keepers dwelling for the front range light, prompting the relocation of the dwelling and associated outbuildings to the rear light in 1900 as there was no healthy site in the intervening mile-and-a-quarter.

An acetylene light was installed in the front range in 1915, and the range lights were decommissioned in 1932. The surrounding area subsequently played host to a contingent of Marines during World War II. The facility was known as Camp McDougal, which served as a center for training men, dogs, and horses for the southeastern seaboard patrol. Each week, 600 recruits would arrive at the camp, and 600 who had finished training would be shipped off to patrol duties. After the marines left the area, the tower and surrounding land was eventually sold to Greenwood Development Corporation, and in the mid-1980s the lighthouse was incorporated into the new Arthur Hills Golf Course at Palmetto Dunes Resort, where it directs golfers to both the 5th and 15th greens.

The front range light no longer exists, and only the old brick oil house and a cistern stand next to the rear range light. In the 1960s, the two keepers dwellings associated with the lighthouse were cut in half and moved to Harbour Town, where they can be found alongside Lighthouse Road. One dwelling serves has served as a Bakery and Cafe, while the other has been home to the Sea Pines Real Estate Company.

For a larger map of Hilton Head Rear Range Lighthouse, click the lighthouse in the above map.

Take Highway 278 onto Hilton Head Island. Near mile marker 8 is Palmetto Dunes Resort where the light is located. From 278, turn east onto Queens Folly Road until you come to a guard shack. Tell them you want to visit the lighthouse, and they will give you a pass. (I've been told that passes are not given after 5 p.m. and motorcycles are not allowed.) Proceed straight on Ocean Lane, until you see a gate on your right for Arthur Hills Golf Course. Go through the gate, and then turn left onto Leamington Lane and follow it to the lighthouse.