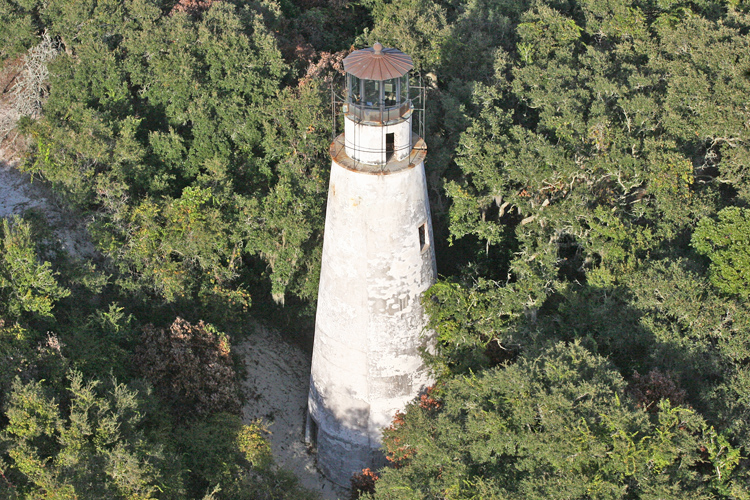 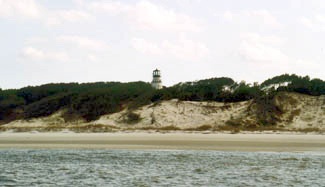 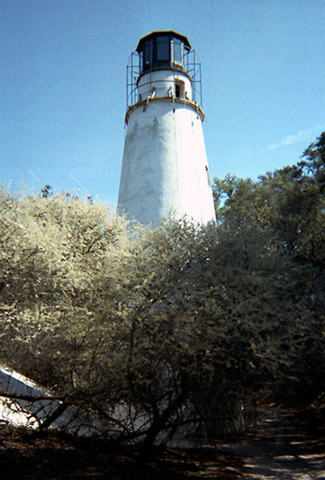 Georgias Atlantic Coast is protected by a string of barrier islands stretching from Florida to South Carolina. Cumberland Island is the southernmost of the islands and also the largest and longest. Little Cumberland Island lies just north of Cumberland Island and is separated from the larger island by a marshy area formed by Christmas and Brockington Creeks. Both Cumberland islands have been home to a lighthouse. One has been relocated, and the other is now privately owned.

Cumberland Island received its lighthouse first. Six acres at the southern tip of the island were ceded to the U.S. Government in 1802 by the State of Georgia for the construction of a lighthouse. However, it was eighteen years before the lighthouse, built by Winslow Lewis, became a reality. After eighteen years of service, the lighthouse was dismantled brick by brick and reassembled in 1838 on the northern end of Floridas Amelia Island, which lies just across the mouth of St. Marys River from the original lighthouse site. Apparently the lighthouse was able to better mark the entrance to the river from the Florida side.

Joseph Hastings of Boston was contracted to build Little Cumberlands sixty-one-foot, brick tower and keepers dwelling. The lantern room atop the tower was filled with fifteen lamps and sixteen-inch reflectors generating a fixed light, which distinguished it from the older tower to the south that had a revolving light. The light commenced operation on June 26, 1838.

The towers first keeper was David Thompson who held the position for eleven years while earning $400 annually. William F. Kelley took over in 1849, and not long thereafter someone entered the tower during the night with false keys and turned the cocks in the oil butts, allowing the oil to run out on the brick floor. Keeper Kelley was able to recover forty-seven gallons of the oil.

Though the importation of slaves had been outlawed in 1808, the last slave ship to reach the United States was the Wanderer, which arrived at Jekyll Island, just north of Little Cumberland Island, on November 29, 1858 with 409 slaves. James A. Clubb, who would become keeper of Little Cumberland Island Lighthouse the following year, was talked into piloting the Wanderer across the bar and safely into St. Andrew Sound. The Wanderer Memorial, dedicated to the illegally imported slaves, was placed on the southern end of Jekyll Island in 2008.

Little Cumberland Island Lighthouse received a third-order Fresnel lens in 1857, but when Union ships sailed into St. Andrew Sound a few years later, Keeper Clubb rowed out and told them he had taken out the lens, packed it up, and sent it to Brunswick as ordered by the Confederacy. Union forces found Brunswick deserted and were unable to recover the lens. Union troops seized the Wanderer as an enemy vessel in the spring of 1861 and used it as a gunboat and hospital ship to help bring an end to slavery.

The tower survived the Civil War, though it was dark during much of the conflict. Extensive repairs were necessary to restore the station to working after the damage caused by the rebels. Normal operations recommenced on September 1, 1867 using a new lantern room and a third-order Fresnel lens, manufactured by the Parisian firm of Henry-LePaute.

To provide protection from the encroaching sea, a brick wall was built around the lighthouse in 1876 at a distance of six feet from the tower and extending down two feet below its foundation. The space between the tower and brick wall was filled with concrete and paved with brick. A heavy covering of oyster shells was placed around the dwelling to protect its foundation. A new dwelling was completed for the head keeper in 1881, and two years later, the assistant keepers dwelling, which was nearly uninhabitable, was thoroughly repaired and painted. A single keeper was responsible for Little Cumberland Lighthouse until J.S Hunter was hired as an assistant in 1871.

Assistant Keeper August Haine was on duty atop the tower on August 31, 1886 when the effects of the Charleston earthquake were felt at the station. The Fresnel lens began shaking as though it would fall to pieces and appeared to move horizontally, from east to west, while out on the balcony and in the dwellings, the quake seemed to be more vertical. The first shock, which lasted about five minutes, stopped the stations clock at 9:30 p.m. The only damage done to the station was cracking of the plaster in the dwelling and loosening of the storm panes atop the tower.

A fireproof brick oil house, measuring nine by eleven feet and having sufficient shelf space to hold 450 five-gallon oil cans, was built at the station in 1890.

In 1915, the Rambler, with four men on board, became stranded on a sandbar near Little Cumberland Lighthouse. Storm-tossed seas slowly beat the ship to pieces, and all aboard perished. Keeper John Robertson and his assistant, Marvin B. Wilder, provided shelter for the parties searching for the crew of the Rambler, but only one body was recovered.

Little Cumberland Lighthouse was deactivated on March 15, 1915 and then sold at auction along with six acres of land in 1924 to R.L. Phillips Company of Brunswick, Georgia for $800. Little Cumberland Island Association purchased the island in 1961 and decided that ninety percent of the island would be left as wilderness. The remaining ten percent of the island was divided into 100, two-acre lots where development is allowed, but only thirty-six homes have been built.

In 1967, the Little Cumberland Island Association announced the following in its newsletter:

The two derelict buildings at the lighthouse are to be removed and the old bricks made available to members wanting to buy them for island construction. Proceeds are to be used to cover the cost of replacing the lighthouse spiral staircase and the steel superstructure.

The keepers dwellings were dismantled in 1968, and by early 1969, the lighthouse had been restored and equipped with a new spiral, wooden stairway. The lighthouse was placed on the National Historic Register in 1989. As the island is private, access to Little Cumberland Lighthouse is not permitted. Today, a large dune protects the lighthouse from the sea but also prevents good views of the light from the nearest public viewing area  the water.

For a larger map of Little Cumberland Island Lighthouse, click the lighthouse in the above map.

Access to Little Cumberland Island is restricted to home owners and their guests. We had Coastal Expeditions take us by boat from nearby Jekyll Island across Saint Andrew Sound to photograph the lighthouse from the water. A large sand dune blocks the bottom portion of the tower, preventing a picture of the complete tower. Coastal Expeditions can be reached at (912) 270-3526.

The lighthouse is owned by the Little Cumberland Island Association. Grounds/tower closed.


It is difficult to get a good view of the lighthouse, but there are several other interesting sites in the area. Jekyll Island was a playground for wealthy capitalists around the turn of the 19th century. The exclusive Jekyll Island Club was built on the island in 1886 and had as its members Rockefellers and Vanderbilts. Some of the wealthy also built "cottages" around the club, which are now known collectively as Millionaires' Village. Today, the Jekyll Island Club is a hotel, and allows the common man to spend the night and play croquet on its lawns.

The public is also welcome to visit Cumberland Island, which was also home to some opulent mansions. However, today the island is primarily owned by the park service, which is allowing the island to return to a natural state. Access to the island is by ferry, and only 300 visitors are allowed on the island at a time.


If you are a Kennedy watcher like me, you are probably already aware that JFK Jr. and Carolyn Bessette were married in Cumberland Island's small First African Baptist Church on September 21, 1996. Their reception was held nearby at the Greyfield Inn.