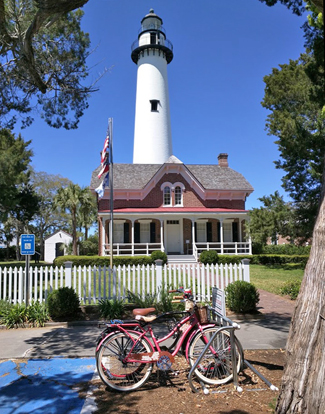 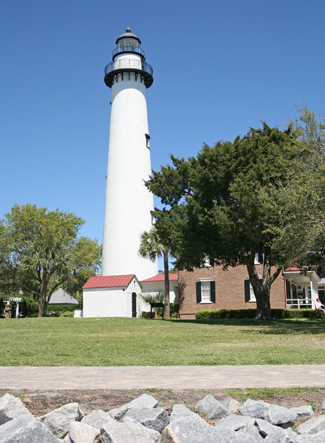 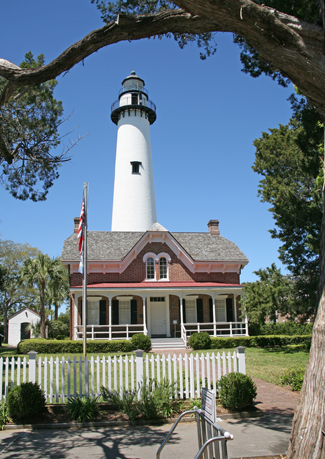 The beautiful two-story, brick keepers dwelling and the white, 104-foot tower on St. Simons Island today seem like the idyllic light station, but such was not always the case. The station was considered isolated before being linked to the mainland, and one of the head keepers was murdered on the lighthouse grounds. In addition, stagnant ponds on the island provided the perfect breeding grounds for disease-carrying mosquitoes, which led to the death of two men overseeing construction of the lighthouse.

Congress appropriated $7,000 on March 16, 1804 for a lighthouse on Saint Simons Island, and John Couper, owner of a plantation on the southern end of the island, sold four acres of his land to the government later that year for a token sum of one dollar. Couper was anxious that a lighthouse be built on the island to aid commerce in the Brunswick area.

The original appropriation reverted to the treasury in 1806, but Congress provided the much larger sum of $19,000 on March 3, 1807 for the project. In April 1807, Coupers plan of getting a lighthouse on his property seemed to have worked as a notice appeared in the Savannah Advertiser soliciting a builder with sufficient skills to erect a lighthouse on the southern end of St. Simons Island. The plans called for a lighthouse constructed of brick in the form of an octagon, supported by a stone foundation and secured by a substantial panel door with iron hinges.

James Gould, newly arrived from New England, answered the ad and suggested that the tower be constructed of tabby, a local building material made from a mixture of lime, water, sand and oyster shells, and that some other minor alterations to the design be made. Goulds suggestions were accepted, and he was awarded the contract.

Gould used the ruins of Fort Frederica, which was built on the island in 1736, as a source for the tabby, and completed the seventy-five-foot tower in late 1810 at a cost of $13,775. Oil lamps suspended on chains served as the original light source.

With St. Simons Lighthouse finished, Gould was now out of work, but the following excerpt from a letter exchanged between two of his sisters reveals his time at the lighthouse was not yet done.

James has been officially appointed Keeper of the Light by President Madison, at a salary of $400 a year. The appointment came 4 May and he was, in spite of the small pay, plainly pleased to be trusted with the keeping of his beloved lighthouse. He appears also proud of the tower, so far, but what he insists is my discontent, I feel is somehow his own. I simply try to make him laugh and attempt to understand what it is he really wants to do with his life once the lighthouse is completed and he has been its keeper long enough to be satisfied that the lantern and all else is in order.

Apparently Gould was not too discontented with his life at the lighthouse as he served as keeper for twenty-seven years.

A residence was evidently not built with the lighthouse as James Gould was paid $1,700 in 1830 to build a keepers dwelling. In 1838, it was noted that the towers eight-inch reflectors were too small. This problem was corrected in 1847 when nine lamps with fourteen-inch reflectors were installed in the lantern room. In 1856, the lighthouse was outfitted with a third-order Fresnel lens.

When Confederate troops abandoned the island in 1862, they dynamited the tower and keepers cottage, so they would not benefit Union forces.

Following the Civil War, noted Georgia architect Charles B. Cluskey drew up plans for a new lighthouse and dwelling on the island for which Congress had appropriated $45,000 on March 2, 1867. In the fall of 1869, a contract for the project was awarded to the lowest bidder with a completion date around the middle of the following year. Difficulties in procuring materials and landing them at the site resulted in the completion date being pushed back to November 1, 1870, but even this date would prove too ambitious. During the summer months, there was a great deal of sickness at the site, and the contractor fell ill and died. One of the contractors two bondsmen stepped in to complete the work, but he also passed away at the lighthouse.

The surviving bondsman stepped in in November 1871, when the lighthouse stood at fifty-one feet, and over the next several months managed to complete the impressive Victorian duplex and 104-foot tower. The light from a third-order, L. Sautter Fresnel lens was first shown on September 1, 1872. The lens is a fixed lens, meaning it does not contain any flash panels and thus produces a steady light, however, there are four flash panels that revolve around the outside of the lens producing a bright flash once per minute. Originally, the panels produced alternating red and white flashes, with intervals of one minute. Bradford B. Brunt was hired as the first keeper of the new lighthouse, and unlike the keepers of the original lighthouse, Brunt was provided an assistant to help with the work.

The keepers at the new lighthouse repeatedly complained about the unhealthy living conditions on the island, prompting the Lighthouse Board finally to drain the ponds near the lighthouse in 1875. Seeds of the Eucalyptus globulus tree were also planted at the station, as the trees were believed to neutralize the noxious gases that caused malaria. Only later was it learned that the trees helped prevent malaria by consuming large quantities of water, thus helping to drain the swampy areas where mosquitoes bred.

On a Sunday morning in March 1880, Keeper Frederick Osborne and John Stevens, his assistant, had a duel on the lighthouse grounds, wherein Stevens shot Osborne dead. The two keepers had been working together at the lighthouse for roughly five years, but things came to a head when, according to various accounts, either Osborne made inappropriate remarks to Stevens wife, or Stevens made unwanted advances towards Osbornes wife.

Stevens was later acquitted of murder charges, which may have prevented a peaceful rest for the departed Osborne, whose service was cut short. During Carl Svendsens service as keeper, which lasted from 1907 to 1935, he and his wife repeatedly heard mysterious footfalls, which would send their dog Jink into a frenzy. To this day, people claim to hear inexplicable footsteps in the tower.

A speaking tube was installed in 1876 to connect the watchroom atop the tower with the dwelling so the relief keeper could be summoned. Keeper Isaac Peckham was lying down in the watchroom on the evening of August 31, 1886 when at 9:30 p.m. the Charleston earthquake shook the station. Keeper Peckhman reported that the accompanying noise was like that made by a horse running over a hard road and that one of the red flash panels broke. In May 1887, Mother Nature took another swipe at the station when lightning struck the dwelling. This prompted the addition of two new lightning conductors, with improved ground connections, to the dwelling.

The erection of a light to range with St. Simons Lighthouse and guide mariners safely over the bar and into the harbor was proposed as early as 1837, but Congress didnt provide funds for it until 1893. The selected site for the beacon had to be obtained through condemnation proceedings, which delayed the establishment of the range light until May 1895. A triangular, skeletal tower, made of iron and supported by brick piers, was used to display a locomotive reflector light at a focal plane of thirty-seven feet. A hurricane destroyed this structure on September 29, 1896, but it was replaced the following month.

The front beacon, which was located roughly 1,000 feet east of the lighthouse, was again destroyed by a storm in 1898, necessitating the erection of a new structure. When the foundation of the front beacon started being undermined by high tides, a pile foundation was built to support the light in 1900, as the range was too short to allow the beacon to be shifted closer to the lighthouse. An elevated plank walk, linking the beacon to the high-water mark was built in 1904.

In 1890, a brick oil house was constructed on the lighthouse grounds to store the volatile kerosene, which replaced the increasingly expensive whale oil as the lamp fuel. The nine-by-eleven building could hold 450 five-gallon oil cans. Kerosene was in turn replaced by electricity in 1934, and the station was automated sixteen years later in 1950. Shortly after automation, the passageway connecting the tower to the dwelling was removed.

The keepers dwelling was vacant for several years until it was leased to Glynn County in 1972 for use as a museum and visitors center. After three years of restorative work overseen by the Coastal Georgia Historical Society, the museum opened to the public. The tower was opened in 1984 to climbers willing to brave the 129-step spiral staircase. Under the National Historic Lighthouse Preservation Act, ownership of St. Simons Lighthouse was officially transferred to the Coastal Georgia Historical Society on May 26, 2004.

For a larger map of Saint Simons Lighthouse, click the lighthouse in the above map.

From Highway 17 in Brunswick, take the Torras Causeway to Saint Simons Island. After the bridge over the Frederica River, turn right on King's Way. Stay on King's Way past the blinking light at Sea Island Causeway, and past the traffic signal at Frederica Road (at this intersection, you will see the airport on your left). At the next traffic signal, turn right on Mallory Street, go one block to Beachview and turn left. Go 1/4 mile to 12th Street and turn right. St. Simons Lighthouse will be on your right at the end of the street.

The lighthouse is owned by the Coastal Georgia Historical Society. Grounds/dwelling/tower open.


While traveling from West Virginia to Florida in 1961, Eugenia Price stopped to visit St. Simons Island. Price fell in love with the island and the South and started researching some of the early settlers on the island. Over the next several years, Price penned an historical fiction trilogy on the island, the first book of which is entitled Lighthouse and tells the story of James Gould, builder and first keeper of St. Simons Lighthouse.

While you are on St. Simons Island a stop at the beautiful and enchanting Christ Church is definitely merited. The huge oak trees draped in moss surrounding the cute church make for a very peaceful setting. Behind the church, you will find the tombstone of James Gould, and nearby you can visit the graves of other characters from Prices novels and even the gravesite of Price herself. Price moved to the island shortly after her unplanned visit in 1961, and made it her home for the rest of her days.


When transiting between lighthouses in Georgia, be sure to watch your speed, especially in those construction zones with big orange signs and cones. There is something to be said for Southern hospitality, but apparently it does not apply to speeding tickets.