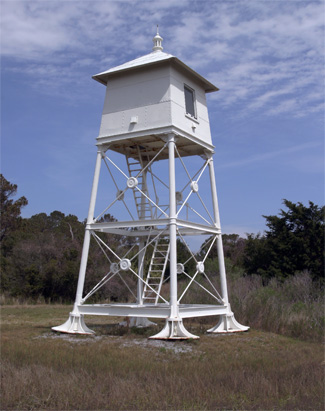 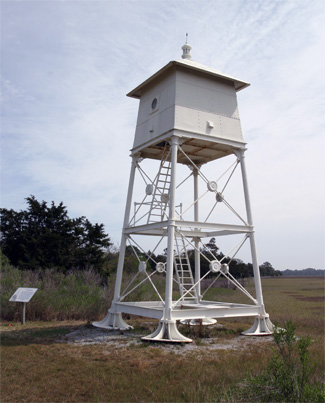 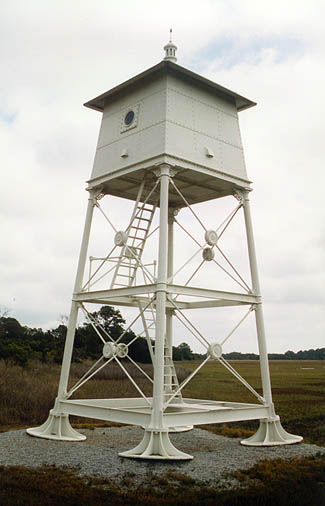 In 1855, the Lighthouse Board requested $1,500 for a beacon light on the southern point of Sapelo Island, where it would form a range with Sapelo Island Lighthouse to assist mariners in locating the proper channel for entering Doboy Sound. Congress supplied the requested amount on August 18, 1856, and the beacon, which exhibited a fixed white light using a fifth-order Fresnel lens, was placed in operation in 1857. Mariners were told to bring the beacon in range with the main light, and run for them until the outer or east beacon on Wolf island was at a specific bearing.

The beacon that served as the front range light was apparently heavily damaged or destroyed during the Civil War, as a new movable beacon was built following that conflict. After extensive repairs, Sapelo Island Lighthouse returned to service on the evening of April 15, 1868, along with the beacon, which was mounted on a fifty-foot frame tower located 660 feet southeast of the lighthouse. The beacons tower was placed on a 100-foot tramway so it could be easily moved to track changes in the offshore channel.

In 1874, the Lighthouse Board noted that the front beacon was old and infected with dry-rot, and as it would be cheaper to rebuild it then repair it, $2,500 was requested for a new one. Congress appropriated $2,500 on July 31, 1876 for rebuilding the front beacon, and plans and specifications were made for a new iron tower. The current twenty-five-foot-tall metal tower was placed in operation in 1877. In 1882, the front light was moved some distance seaward, which increased the usefulness of the range by making it more sensitive to movements by mariners.

On October 2, 1898, the most powerful hurricane to ever strike Georgia came ashore near Cumberland Island. The storm killed at least 179 people, and on Sapelo Island, the storm surge covered the floor of the second story of the keepers dwelling and submerged the oil house. The iron tower likely weathered the storm in good shape, but in February 1899, the front beacon was dismantled and the range discontinued.

The tower must have been reassembled at some point, as the Coast Guard reportedly used it during World War II as a lookout for German submarines. Today, the ornate tower is located 600 feet east of the 1820 brick tower and received a fresh coat of paint when the State of Georgia restored Sapelo Island Lighthouse in 1998.

For a larger map of Sapelo Island Range Front Lighthouse, click the lighthouse in the above map.

To visit Sapelo Lighthouse a 30-minute ferry ride and a tour of the island are required. Four-hour tours that include the lighthouse are offered on Saturdays at 9 a.m. From June through Labor Day, an additional tour is offered on Fridays at 8:30 a.m. An extended tour which also includes the mansion is offered on the last Tuesday of the month from March through October. For tour reservations and further information, call (912) 437-3224. You can also tour the island with Sapelo Sights.

The ferry dock and Sapelo Island Visitor Center are located eight miles northeast of Darien. From Interstate 95, take Exit 58 and follow Highway 99, 9.3 miles to Landing Road. Turn left on Landing Road and follow it to the visitor center.