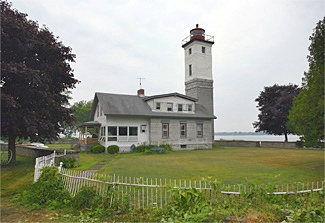 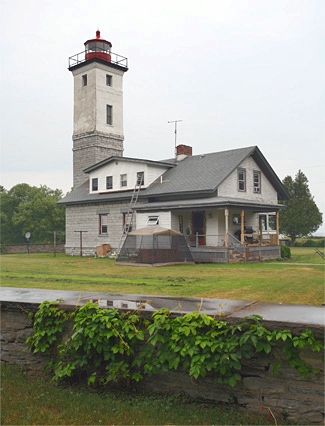 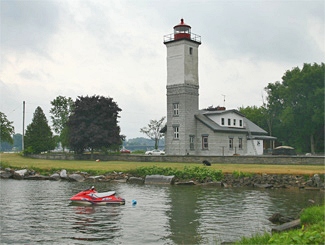 Lighthouse Point, situated at the confluence of the Oswegatchie and St. Lawrence Rivers, has an eventful history centered on the struggles of three nations to control this portion of the New World. In 1749, Abbé François Picquet constructed Fort de La Présentation on the point to convert members of the Iroquois Confederacy to Catholicism and to the French side in the mounting tensions with the British. In less than a decade, the fort, the first permanent settlement in northern New York State, had attracted over 3,000 Native Americans, a substantial population considering that Montreal at that time had only 4,000 residents. Still, the British in North America greatly outnumbered the French, and in 1759 the fort was abandoned during the French and Indian War, which ended in 1763 with control of Canada passing from the French to the British. Renamed Fort Oswegatchie, the stronghold was used by the British during the Revolutionary War, but even after their surrender in 1783, the British did not relinquish control of the fort until 1796. In that year, Nathan Ford, land agent for Samuel Ogden, established the American settlement of Ogdensburg. The British, however, were not gone for good, as they returned on February 22, 1813 and routed the American troops garrisoned at the remains of the old fort. After the British withdrew, Ogdensburg would remain unprotected throughout the remainder of the War of 1812.

Prior to the War of 1812, Ogdensburg was becoming an important port, and in 1811 a Custom House had been established in a building constructed two years earlier to serve as a warehouse for distributing goods received at the port. This building remains standing and is the oldest Federal building still occupied and used by the government in the continental United States.

In 1834, an acre and a half of land near the site of the fort was sold by the Nathan Ford family to the Federal Government, and later that year the first Ogdensburg Lighthouse, a dwelling with a lantern room containing ten lamps and reflectors arranged in a circular fashion, was constructed thereon. When Lieutenant Charles T. Platt inspected the lighthouse in 1838, he noted that the St. Lawrence River was three feet above its normal level and had flooded the stations garden and made the lighthouse inaccessible by land. A seawall had earlier been built to protect the lighthouse, but for some reason a sixty-foot gap was left in it. Lt. Platt requested sixty dollars to complete the seawall, and fifty dollars to raise the foundation of the wood house. A fourth-order Fresnel lens replaced the lamps and reflectors in 1855.

On July 15, 1870, Congress appropriated $13,000 for the renovation and repair of the station, and the following month work commenced on a new lighthouse. The design used was the same as that followed the previous year for Stony Point Lighthouse near Henderson, New York, except that the tower at Ogdensburg would rise to a height of thirty-nine feet, eight inches - six feet, eight inches taller than the Stony Point tower. The dwelling and attached tower were built of square-cut, rough-faced limestone obtained from the Kingston quarries. This same material was used to build nearby Sisters Island Lighthouse as well as Big Sodus Bay Lighthouse. The new lighthouse was completed on June 9, 1871, by which time the seawall had also been raised and the enclosed land filled, graded, and seeded with grass.

The windows in Ogdensburg Lighthouse are decorated with limestone lentils and sills, and the exterior door that opens into the tower is surmounted by a lentil inscribed with 1870, the year of construction. Two gabled dormers were later added on each side of the dwellings sloping roof, but these have since been combined to form one larger dormer on each side. In 1892, the lighthouses old stone kitchen was removed, and a new larger frame kitchen and porch were added to the rear of the dwelling.

The Rome, Watertown, and Ogdensburg Railroad Company built an elevated track from the mainland to a point in front of the lighthouse in 1886, and built a car ferry to link Ogdensburg with Prescott, Ontario. Remnants of this work can still be seen extending into the river near the lighthouse.

The height of the tower was increased to sixty-five feet in 1900 by the addition of brickwork between the original limestone tower and lantern room. This brick extension, with arches and corbeled brick detailing below the lantern, was nearly identical to that added at Stony Point in 1901. The brickwork has since been covered by a concrete-like facing. With additions made in different decades, the Ogdensburg Lighthouse ended up as a mixed breed architecturally, having an Italianate tower and a Queen Anne influenced dwelling. Also in 1900, a 270° Barbier & Fenestre Fresnel lens was substituted for the 180° lens previously in use to increase the arc of visibility of the light.

In 1913, seventy-seven-year-old Samuel A. Penfield, one of the oldest keepers on the Great Lakes, tendered his resignation after serving twenty-five years at Ogdensburg Lighthouse. Amherst Gunn, who had been serving at the lighthouse depot in Buffalo, replaced Penfield and looked after Ogdensburg Lighthouse until January 1, 1932, when he retired after forty-eight years of government service. During Gunns service, the light was converted from oil to acetylene, and its characteristic was changed from fixed to occulting. Daniel Hill, who had previously served at nearby Crossover Island Lighthouse for roughly twenty years, was the last official keeper of the lighthouse from 1932 to 1933 before being transferred to Huron Harbor Lighthouse in Ohio. Harold Cook and his new bride moved into the lighthouse in 1933 and served as its caretaker until 1941, when the couple moved to Niagara Falls.

After World War II, veteran Richard Montroy moved into the vacant lighthouse with his wife Carol and their three-year-old child when there was an acute housing shortage in the area. Later, members of the Arthur Piercy family called the lighthouse home, reportedly paying $7 a month for the privilege. When the Montroys moved into the lighthouse, there was no running water as the water pipes had rusted through. The couple carried drinking and cooking water from the New York Central Roundhouse. Water for baths and flushing the toilet was taken from the St. Lawrence River, while water for laundry was obtained from the Oswegatchie River, whose water was softer.

Odensburg Lighthouse was discontinued on June 1, 1961, and in 1964, Thomas G. Roethel, assistant fire chief in Ogdensburg, and his wife Laurel were notified by the General Services Administration that their bid of $2,400 for the lighthouse had been accepted after the city declined the opportunity to purchase the property, valued at $24,000, for $900. At the time of the transfer, tall weeds covered the lot, but the Roethels assured a local reporter, this wont be for long. The family set about rehabilitating the lighthouse and turned it into a summer home.

In 2007, Blair Roethel, son of Thomas and Laurel Roethel, was living in the lighthouse when he applied to the City of Ogdensburg for a permit to demolish the structure. His application was denied because it did not include asbestos removal plans or structural reviews. This move, which attracted national media attention, was apparently a bluff by Roethel, who felt he was required to pay excessive taxes and fees on a historic structure that served as a symbol for Ogdensburg and a tourist attraction.

Blair Roethel has since established a website for the lighthouse, confirmed his intention to save the structure, and contacted the American Lighthouse Foundation, which may be able to help defray the large expense of restoring and maintaining such a historic property.

The Fort La Preséntation Association has acquired twenty-one acres nearby on Lighthouse Point and had hoped to construct a full-scale replica of the French fort in time for the 250th anniversary of the outbreak of the French and Indian War that was commemorated in 2010. An effort to clean up the land, which was formerly home to an Exxon Mobil storage area, far surpassed the original estimate of $3 million and affected the planned reconstruction timeline. There still will be a signature event here, said Barbara OKeefe, President of the Fort La Preséntation Association, but wouldn't it be wonderful if we had a fort? The fort would indeed be a great addition to the community, and if combined with the lighthouse, Lighthouse Point could easily become a premiere tourist destination.

During a private gathering on October 7, 2011, fireworks lit up the sky before Ogdensburg Harbor Lighthouse was relit at 8:20 p.m. as an official aid to navigation. Blair Roethel told a reporter that his father, who passed away in 1987 at the age of fifty-six, had always dreamed that one day the decommissioned lighthouse would again shine its light for the shipping traffic on the St. Lawrence River.

Located on the shore of the St. Lawrence River in Ogdensburg, just west of the mouth of the Oswegatchie River
Latitude: 44.69788, Longitude: -75.50341

For a larger map of Ogdensburg Harbor Lighthouse, click the lighthouse in the above map.

The lighthouse is a private residence. Grounds/dwelling/tower closed.


The land just east of the lighthouse that extends out into the St. Lawrence River was the site of the New York Central Railroad Pier, which was used to ferry railroad cars across the St. Lawrence. The pier was struck by lightning on September 25, 1970 and burned.