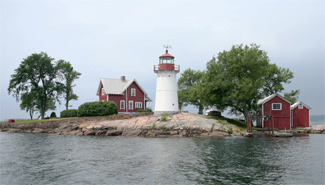 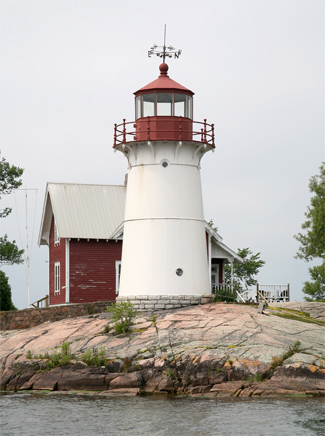 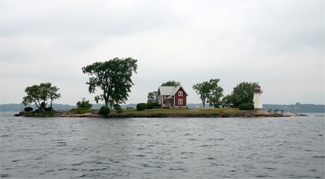 Crossover Island was so named due to its location near the point where, prior to the construction of the St. Lawrence Seaway, vessels following the shipping channel crossed over the international boundary between the American Channel and the Canadian Channel. In an 1838 report Naval Lieutenant C.T. Platt made the following recommendation to the Secretary of the Treasury.

I conceive it my duty to represent, in the strongest terms, the necessity of establishing a beacon-light upon Cross-over island, eight miles above Morristown. This island is situated between the two channels, and will be a guide for either. It would be a difficult task to attempt an adequate representation of the numerous shoals and sunken islands obstructing the navigation of this river; generally, however, they are located in the neighborhood of the Thousand Islands; and it is in the midway of this cluster of islands, and the only feasible channel, that Cross-over island, on which it is proposed to erect a beacon, is situated.

Cross-over island, is about eight rods (132 feet) in length, and five rods (82.5 feet) wide; is a solid rock, with a few trees, that have taken root through the crevices of the rocks. It is proposed to erect a building for the keeper, and to place the light on top.

Platt estimated the lighthouse could be constructed for just over $2,000, and on March 3, 1847, Congress appropriated $6,000 to construct Crossover Island Lighthouse and two others to mark the Thousand Islands area of the St. Lawrence River. Crossover Island was the easternmost of the three, while Rock Island was the westernmost, and Sunken Rock was in the middle, at the head of the narrows near Alexandria Bay.

The design used for Crossover Island Lighthouse was the same as that used at Rock Island: a one-and-a-half-story brick dwelling with a wooden lantern centered atop a pitched roof. Six oil lamps, set in fourteen-inch reflectors, were used inside the lantern room to produce a fixed white light at a height of thirty-seven feet above the river. Obed Robeson was appointed the first keeper at Crossover Island on May 15, 1848 at an annual salary of $350.

Eleazer C. Robertson served as keeper of the light from 1856 to 1861, and the 1860 census indicates he and his wife Olive had seven children with them on the island ranging in age from fourteen to one. The following story of how the youngest child, listed as Ona I., received her name was sent to a local historian by one of Keeper Robertsons sons:

Our youngest sister was born in the light house. Everyone that summer was upset about something. The baby was not well and mother and father, thinking she was going to die, had not even given her a name. We children helped the best we could. One day the Indian woman who came every year to sell baskets up and down the river stopped at our island. She, paddling a canoe piled high with sweet grass baskets, came along side the island, drew up her canoe and came in. She noticed my mothers face and the new baby. Then she said, Baby sick, very sick. I go. I come back. Unloading her canoe, she paddled back up river and in a short time returned. She had collected some herbs which she cooked up. Then taking the baby in her lap as she sat cross-legged on the floor, she said to mother, You sleep, I keep baby.

She would spoon a few drops of medicine into the babys mouth, then wrap her shawl around the little thing and croon and rock back and forth. What she sang sounded like, Onne I one. She did this day after day. I dont know when she slept. She insisted on my poor mother getting her rest. At last, one day she rose from her place by the fire and put baby into mothers arms. Baby well, Baby live now, and she silently left the room, boarded her canoe, and paddled down the river and we waved as long as we could see her. After she left, mother said, She has saved our babys life. Lets name her Onie-Ione. We never knew what it meant and we called her Ione for short. We left the lighthouse the next year and moved to DePeyster. We always thanked God for our good friend who loved the baby and fed her medicine, drop by drop, until she was well. We could never have had a doctor in the middle of the St. Lawrence, not knowing what medicine to get. We always said the Indian lady loved the baby back to life.

An inspector in 1868 noted that the lantern room at Crossover Island leaked badly in several places, the dwellings chimneys required repairs, and the lighthouse required extensive repairs, having been constructed of that inferior material known as soft brick, portions of which had fallen out in many places. In addition, the station had no boathouse, which was considered indispensable. The following year, the needed boathouse was added, shutters were placed on the windows of the dwelling, the interior plastering and chimneys were renewed, and the exterior walls were sheathed with boards.

These repairs to the original structure were more costly than normal due to the isolated location of the lighthouse and only temporarily improved life for the keeper. In 1872, the Lighthouse Board requested $11,000 for a new tower and dwelling at Crossover Island after providing the following description of the current lighthouse:

The tower and dwelling are both in very bad condition, and are not worth repair. The tower is of wood, and rises from the roof of the brick dwelling; the timber is so decayed, and the interior framing so badly arranged, that water finds its way into the interior at all points of the connection with the roof. The brick of which the old dwelling is built were originally very inferior, and have been so injured by frosts that the walls are now unserviceable, and cannot be used for supporting any new work.

Funds for a new lighthouse were finally provided after a decade of requests, and in 1882, a new six-room, two-story keepers dwelling, a duplicate of those erected at Tibbetts Point, New York and Marblehead, Ohio, was constructed. The house has three gables, which were formerly decorated with heavy cross-timbers and adorned with finials. A detached thirty-foot-tall iron tower, very similar to the one erected the same year at Sunken Rock, was placed upon a concrete pad and lined with brick, salvaged from the old lighthouse, to the first landing and with wood above that. A sixth-order L. Sautter & Co. Fresnel lens was installed in the new tower, and the fourth-order lens used in the original lighthouse was placed in the outer tower at Presque Isle near Erie, Pennsylvania. The new tower at Crossover Island was originally brown in color, but on the opening of navigation in 1899 it was painted white to improve its visibility.

A cistern in the cellar of the keepers dwelling stored rainwater for the station, but as this was not always sufficient for the islands residents, in 1884, a well was sunk through granite to a depth of over twenty-five feet and equipped with a pump.

Starting near the tower, a stone and concrete seawall, 232 feet in length, was built along the southern side of the island in 1903, and over 300 cubic yards of earth were brought in to create a fair sized lawn in front of the dwelling. An iron oil house was added to the station in 1904.

Daniel D. Hill became keeper of Crossover Island Lighthouse in March 1909 and held the position for over twenty-two years. Keeper Hill and his wife Cora raised a family of seven children on the island. One of these, Ralph E. Hill, has written extensively about his childhood on Crossover Island. Ralph recalls that there was no telephone, radio, TV, gas, electricity, running water, indoor plumbing, or central heating on the island. Today, one can hardly imagine living without even one of these conveniences, even for just a day or two. After spending one full winter on the exposed island, Keeper Hill purchased some property at Oak Point and built a cottage where his family could winter more comfortably. A furnace was finally installed in the keepers dwelling just about two years before Keeper Hill left for Ogdensburg Lighthouse.

When school was in session, Keeper Hill would row his brood to the mainland where they were educated in a one-room schoolhouse. During the summer, the Hill children, having none of our modern day distractions, would spend a lot of their time outdoors swimming, fishing, and exploring some of the nearby islands and creeks. June was a special month when over a two-day period eel flies would hatch, mate, lay their eggs, and die. Millions of these flies would collect over the water near the station, and at night, the Hill family would harvest up to 200 hundred eels that would swim to the surface to partake of this annual feast. The eels would be skinned, cleaned, and then smoked the next day in the islands ash house, which was also used to produce lye for making soap.

After the Hills left Crossover Island at the end of 1931, the lighthouse was active for one more decade before being discontinued on April 10, 1941 and replaced with a lighted buoy. Edward J. Sweet was serving as keeper of the lighthouse when on June 21, 1932, he saw two boys struggling to control a canoe in the river. The boys, Canadian residents, had erected a sail on their canoe to reduce the need to paddle, but the addition made the craft less stable. Keeper Sweet started after the boys in the stations boat when he saw the canoe overturn, and by the time Sweet pulled them from the river, the boys were exhausted.

The government sold the lighthouse as surplus property in 1960 for around $6,000 to three brothers: Harry B. Edwards, John Edwards, and Richard T. Edwards. Nancy Muscarella, daughter of Harry Edwards, spent many weekends on the island, which the family used as a vacation camp. She recalls her father towing a septic tank to the island behind his boat and the islands lilac bushes, whose fragrance covered the whole island in the spring. In 1969, Maynard and Betty Jo Dutcher, who loved to picnic on the island, purchased the property. After years of being in the Dutcher family, the island was sold for $465,000 in 2002 to John Urtis, a pilot for United Airlines who formerly flew in the Navy and Coast Guard. In 2011, Urtis placed the island property on the market for $539,900, and the property eventually sold in 2013 for $350,000.

For a larger map of Crossover Island Lighthouse, click the lighthouse in the above map.

Crossover Island Lighthouse can be viewed from River Ledge Road, a road that parallels Highway 12 between Conger Road on the west and Oak Point Road on the east, just over two miles east of Chippewa Bay.

A view from a boat is much better. We chartered a boat out of Alexandria Bay and passed Singer Castle, located on Dark Island between Crossover and Sister Islands, on the way. Although not as impressive as the castle on Hart Island, Singer Castle is still quite a home.