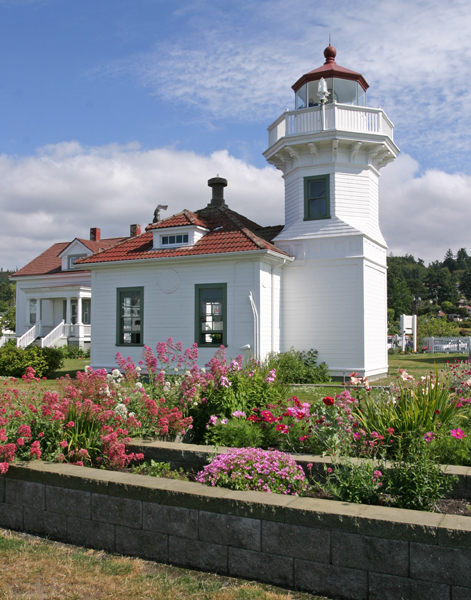 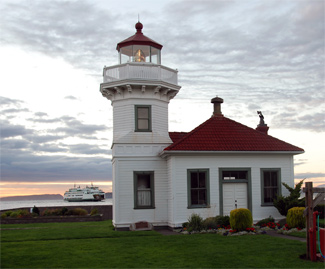 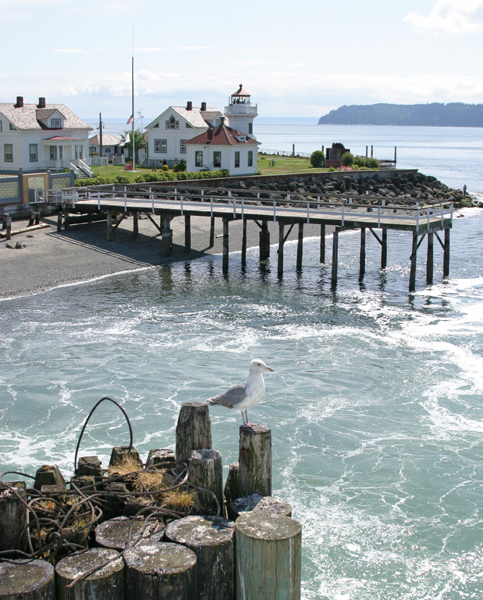 Sitting on a historic plot of land, flashing a white light once every five seconds, Mukilteo Lighthouse guides ships on their way to Everett, Washington.

Native American Indians originally used the land in this area as a site for a camp during the winter months. In fact, Mukilteo is a local Indian word meaning good camping ground.

On May 31, 1792, during his exploration of Puget Sound, Captain George Vancouver anchored his ship and came ashore at the point and named it Rose Point because of the wild pink roses that covered the hillsides. Later, Lieutenant Charles Wilkes, leader of the 1838-42 U.S. Exploring Expedition, changed the name to Point Elliott, likely in honor of midshipman Samuel Elliott.

It was on January 22, 1855 that Washington Territory Governor Isaac Stevens met with eighty-two chieftains representing twenty-two local tribes at the site and ironed out the Treaty of Point Elliott. Through the treaty, the Indian wars ceased, the Tulalip Indian Reservation was established, and white settlement of the ceded coastal area between Seattle and the Canadian border began in earnest. A copy of the treaty can be seen today at Mukilteo Lighthouse.

In 1902, the Lighthouse Board determined a lighthouse at the point was needed:

[T]he proposed light and fog-signal would be of much benefit to navigation, not only to vessels entering the harbor of Everett, Wash., but to vessels going up Possession Sound and Saratoga Passage and by way of Deception Pass to points north, which route is much frequented by the smaller boats running out of Tacoma and Seattle. The tides are very strong and deceiving at Muckilteo Point. Some time ago one of the large San Francisco vessels narrowly escaped running ashore there in a fog.

Everett is rapidly increasing in importance as a shipping point, and many oceangoing and coastwise lumber vessels run regularly to that port. It is also probable that many large steamers will be entering and leaving there in the near future.

After Congress appropriated $22,000 for the lighthouse on January 9, 1903, a survey of the land needed for the lighthouse was made and a plat prepared. Invited bids for construction of the station were opened on June 30, 1905, and work began that August based on a Carl W. Leick design that was also used for the 1908 Ediz Hook Lighthouse and the second lighthouse at Cape Arago, Oregon.

Built on a 2.6-acre site, the lighthouse featured a thirty-eight-foot-tall, octagonal tower that was originally equipped with a revolving fourth-order Fresnel lens manufactured in Paris by Barbier & Benard. The lighthouses wood-frame construction is fairly unique as several similar lighthouses, such as those at Lime Kiln and Alki Point, were built of concrete.

The station consisted of the combination tower and fog signal building sporting a Daboll trumpet, two keepers dwellings, and a windmill over a well that supplied water for the town of Mukilteo. The windmill supported a 1,000 gallon tank for storing water, and housed a workshop, oil room and coal room. A total of $27,000 was expended on the construction of the station.

Head Keeper Peter N. Christiansen exhibited the light for the first time on March 1, 1906, and between that date and June 30, the Daboll trumpet was in operation for twenty-eight hours. The Everett Morning Tribune printed the following about the lighthouse on the day after it commenced operation:

The government lighthouse at Mukilteo flashed its guiding rays for the first time over the dark waters of Puget Sound last night. The light can be plainly seen from almost any favorable point in Everett and dozens of people curiously watched the glimmer of the lamp as it shot its beams of yellow light in the directions of the city at regular five second intervals.

Although Mukilteo is not, in itself, a treacherous spot, mariners for miles in a northern, eastern and southern direction can plainly see a light located there, which will make it an inestimable help to navigation. When in foggy weather the light can be seen but a short distance, the immense fog horn which is fitted up in connection will blast forth its bass note of warning which may be heard six or eight miles away, at regular 16 second intervals.

The original lens had two bulls-eye panels and was revolved once every ten seconds by a clockwork mechanism powered by a suspended weight that had to be wound up every three hours. Keeper Peter Christiansen was born in Norway and went to sea at the age of fourteen. After eleven years in the merchant marines, he served ten years in the U.S. Navy and then joined the Lighthouse Service in 1894. Christiansen spent four years as assistant keeper at Turn Point Lighthouse and then eight years as head keeper before arriving at Mukilteo Lighthouse with his wife Theodine and their four children. David O. Kinyon, who had previously served at Destruction Island for three years, was the first assistant keeper at Mukilteo. The modern station was considered a plum assignment, due in part to its proximity to civilization, and it was reported that Keeper Christiansen received his new appointment as a reward for faithful service.

On September 4, 1925, Keeper Christiansen rescued a boy who was adrift on planks near the station. This was to be one of his last rescues, for on October 5, 1925, shortly after helping unload a shipment of coal at the station, he passed away at the age of sixty-six, likely of a heart attack. No subsequent keeper would serve longer than Christiansens nineteen years at Mukilteo Lighthouse.

Electricity reached the station in 1927, at which time the original revolving Fresnel lens was exchanged for a fixed, fourth-order lens in use at New Dungeness Lighthouse. In 1960, the Coast Guard planned to replace the fixed Fresnel lens, manufactured in 1852 by L. Sautter & Cie., with an airport type beacon, but the Mukilteo community protested. Ironically, the lighthouse now has two Fresnel lenses: the fixed fourth-order lens that remains in the tower, and a multi-bulls-eyed fourth-order Fresnel lens on display from Desdemona Sands Lighthouse, a lighthouse once located on a cluster of piles near the mouth of the Columbia River.

Mukilteos light and fog signal were automated in 1979, and in 1981, a remote fog sensor was installed. The sensor took a reading based on light reflection and then, if necessary, set off the signal. Next to the station, a luxury condominium had been built that was home to a couple of admirals. For some reason, the new fog sensor was activating the signal on sunny days and moonlit nights. After having their sleep interrupted on multiple clear, fogless nights, the admirals became quite irritated, and the Coast Guard was accordingly sent out to address the problem. After a month of investigation, they deduced that the sun or moon would reflect off the white seawall, built around the station to resist storm waves, and trick the sensor into turning on the signal. The seawall received a coat of black paint, and there wasnt a problem after that.

The size of the station was reduced in 1973 when one acre of tideland from its southwest corner was transferred from the Coast Guard to Washington State Parks to become part of Mukilteo State Park, which featured a four-lane boat ramp and large parking area. The public gained access to the lighthouse in 1991 when the City of Mukilteo leased the lighthouse from the Coast Guard, and the Mukilteo Historical Society became the informal caretakers. The two dwellings continued to be occupied by the Coast Guard until 1996, when they too were leased to the city. The historical society offers tours of the lighthouse and makes it available for weddings. According to volunteers, not one of the first hundred performed at the lighthouse was rained on. There was rain before or after, but never on the actual ceremony.

The Coast Guard transferred ownership of the tower and dwellings to the City of Mukilteo in 2001, and the following year, the state gave the adjoining park to the city as well. After some debate, the name of the park was changed to Mukilteo Lighthouse Park. The Coast Guard still maintains the navigational equipment at the lighthouse.

For a larger map of Mukilteo Lighthouse, click the lighthouse in the above map.

From Interstate 5 roughly 22 miles north of Seattle, take Highway 526 west 3.5 miles to where it ends at Highway 525. Turn right on Highway 525 and follow it to the Whidbey Island Ferry Landing in Mukilteo. Mukilteo Lighthouse is next to the landing.

Mukilteo Lighthouse is open April through September from noon until 5 p.m. on weekends and holidays. Call (425) 513-9602 for more information.

The lighthouse is owned by the City of Mukilteo. Grounds open, dwelling/tower open in season.


A quaint little lighthouse. You cannot go wrong in the picture taking since all sides of it are photogenic.