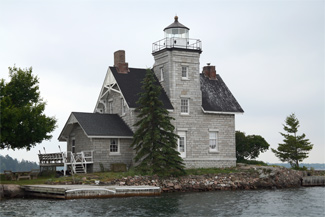 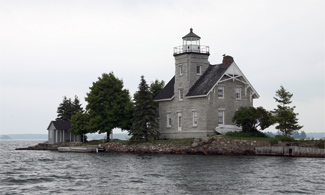 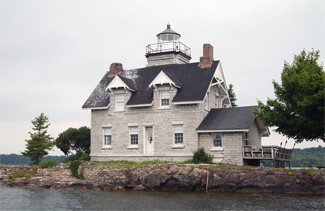 Sister Islands are a string of three tiny islets, now linked together by concrete breakwalls and walkways, that run parallel to and just south of the international boundary line separating the United States and Canada. On March 3, 1859, Congress appropriated $4,000 for a beacon light on one of the Sisters Islands, in the Saint Lawrence River below Alexandria Bay. The Lighthouse Board noted in its annual report for 1860 that preliminary steps had been taken towards the erection of the lighthouse, but before title to the island could be obtained, the funds reverted to the treasury in 1863. Congress provided $10,000 for the lighthouse on March 2, 1867, and before this money was withdrawn, the islands were purchased from Charles and John F. Walton for $142.33, after nine years of persistent labor. The State of New York had approved the sale of the islands and ceded jurisdiction over them to the federal government way back on April 18, 1861.

Sister Islands Lighthouse was constructed in 1870 on the easternmost of the islets to mark a precarious spot along the channel that passed on the Canadian side of the islands. The Lighthouse Board originally proposed that the lighthouse be built of brick, but because of the exposed site and of the difficulty of obtaining the best quality of brick at a price to which the appropriation was adequate, dark gray limestone, from the Kingston quarries, was used instead. A fixed white light of the sixth-order, illuminating an arc of 360°, was first exhibited from the new lighthouse on September 15, 1870 at a focal plane of forty-seven feet above the river.

With decorative trusses and brackets found at each end of its side-gabled roof, Sister Islands Lighthouse shows elements of stick style architecture. Two inset gable dormers, also adorned with decorative trusses and brackets, interrupt the steeply pitched roof on the southern side of the structure, while the tower rises from the center of the roof on the opposite side. The chamfered corners of the tower and the corbeled stonework just under the decagonal lantern room are indicative of Italianate styling. Heavy limestone lintels and sills adorn the lighthouses many windows, and a one-story wing extends from the eastern side of the dwelling. A small shed, housing a bathroom and storage area, is the only other remaining structure on the islands.

William Dodge, who suffered a severe fracture of his left foot while serving as a captain of the New York volunteers during the Civil War, was appointed the first keeper of Sister Islands Lighthouse. Prior to his career as lightkeeper, Dodge had been employed as a cabinet maker, collector of taxes, and census enumerator.

Using a $700 appropriation provided on March 3, 1875, the Lighthouse Board constructed a sixty-seven-foot-long retaining wall on the northwest side of the lighthouse to protect the island from the action of the water. The area behind the wall was filled in with earth, and at the same time, the rough causeways of piles and boards on trestles, which had previously served to connect the three islets, were removed, and substantial, dry-stone causeways, 230 feet long, were built in their place.

In 1884, a well was sunk through the granite island, and a sufficient supply of water for the lighthouse was obtained at a depth of just under twenty-six feet. A hatchway was cut through the dwellings kitchen floor in 1887 to allow Keeper Dodge and his family to use the space below as a cellar.

William Dodge passed away in 1893 from dropsy of the heart at the age of seventy-six. William Dodge, Jr., who was forty-two at the time, replaced his father as keeper and went on to serve twenty-eight years at the lighthouse. Early in the morning of June 7, 1894, the Canadian passenger and freight steamer Ocean, upbound on the St. Lawrence River, collided with the American barge Kent, the last in a string of five barges being towed downriver by the tug Seymour. Keeper Dodge was jolted awake by the collision, which occurred near the lighthouse. The captain of the Ocean claimed the Kent, which was laden with coal, was showing no lights. Both vessels sunk, and two deckhands asleep in the Oceans forecastle drowned.

The stations boathouse was rebuilt and enlarged in 1896 to provide space for not only the keepers boat but also for coal, wood, supplies, and a workshop. In 1902, an icehouse was rebuilt, and a square iron oil house was erected atop a concrete foundation, fifty feet northeast of the lighthouse. The old oil room in the second story of the tower was then converted into an office for the keeper. A stone wall was built around a portion of the island in 1905, and the islands wooden walkways were replaced by cement at the same time.

Shortly after the lighthouse was commissioned, the shipping channel was moved from the Canadian side of the island to the American side, where a new channel had been blasted out of the rocky river bottom. Clearing a new channel could be a risky adventure as evidenced by an incident that occurred just a few miles downriver from the lighthouse in 1932. The drill barge J. B. King, the largest in Canada, carried twelve drills that could be used individually or simultaneously. With a crew of forty-two men, the ship operated around the clock in double shifts. On the afternoon of June 26th, the drill boat had just finished drilling and the resulting holes had been filled with charges and linked to the ship with detonation wires, when a lightning bolt struck the vessel, detonating the dynamite onboard as well as the underwater charges.

The following description of the resulting catastrophe was carried in the Toronto Globe. The craft was split asunder by the bolt, wreckage was hurled into the air a distance of 200 feet, and when the smoke had cleared virtually no trace of the ship was to be seen, and most of the crew had disappeared beneath the waves. A United States Revenue cutter was just a half-mile away when the accident occurred and raced to the scene to recover the survivors. Thirty men perished in the disaster.

When the St. Lawrence Seaway opened in 1959, Sister Islands Lighthouse was replaced with a buoy. In 1966, the lighthouse, which was being rented on an annual basis to William N. Barbour, Jr. for twelve dollars a month, was declared surplus property by the Coast Guard. The island station was sold at public auction the following year to Edward Wolos and Emil Gavel of Pequannock, New Jersey for $6,594. The lighthouse remains in the Wolos family, who have lovingly restored and cared for the property.

For a larger map of Sister Islands Lighthouse, click the lighthouse in the above map.