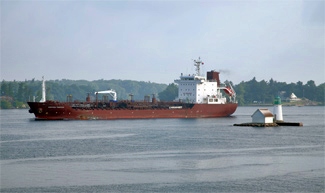 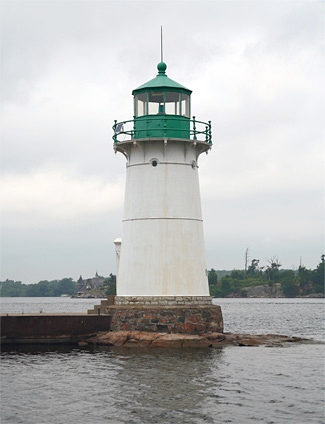 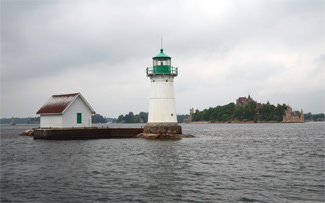 On March 3, 1847, Congress appropriated $6,000 for three beacon lights in the Thousand Islands area of the Saint Lawrence River. One of these was designated to mark Sunken Rock, a dangerous, mostly submerged obstacle located near the eastern entrance to the narrows running between Wellesley Island and the mainland, while the other two were to be placed at Crossover Island and Rock Island. Sunken Rock, also known as Bush Island, was purchased from Chesterfield Pearson, and the deed, dated April 12, 1847, listed the area of the rock as 10,890 square feet, though only a fraction of this was above water.

During the summer of 1847, a brick beacon was built atop the rock on a protective pier. This brick tower stood twenty-seven feet tall from its base to the middle of its lantern room, where five lamps, set in fourteen-inch reflectors, produced a fixed white light. In 1855, a sixth-order Fresnel lens replaced the array of lamps and reflectors.

The 1878 Annual Report of the Lighthouse Board noted that the brick tower was sheathed with wood and shingled, but was by that time, an old and rough structure, in bad repair. The lantern was deficient, being of an old design with large sashes and small panes, and at that time, the keeper, not being provided a dwelling, was forced to rent a house in Alexandria Bay, a half mile from the light. Given the condition of the tower, the Lighthouse Board petitioned Congress for $5,000 for a new tower.

On May 15, 1882, the old brick tower was torn down, and the light from a new round iron tower, erected on a concrete base built over the foundation of the first light, was exhibited on the night of June 12. Originally painted brown, the metal tower tapers from a diameter of twelve feet, four inches at the base to nine feet at the lantern room and is lined with bricks up to the first landing and wood above that. A semi-circular staircase winds up to the landing from where an eight-step ladder provides access to the lantern room. The tower is identical to those placed on nearby Crossover Island and Rock Island that year and three erected the previous year at Ten Pound Island, Massachusetts, Isle La Motte, Vermont and Mayo Beach, Massachusetts. The one at Mayo Beach was later moved to Point Montara, California.

A new boathouse, measuring twenty-one feet by twelve feet, was built the next year to replace the old one, which was too decayed to repair. For the convenience of the keeper, part of the boathouse was partitioned off and fitted with a bunk to serve as a watchroom. At the same time, the superstructure of the ice-breaker and landing were rebuilt from just below water level.

The light-station at Sunken Rock, St. Lawrence River, New York, consists of a tower and boathouse located on a rock about half a mile below Alexandria Bay. There is no keepers dwelling there nor land owned by the United States upon which one can be built.

The keeper and his family live in a small house on the bank of a creek about half a mile from the light. Except that, there is no place for the keeper to haul up his boat when he leaves the light. It is inconveniently located, there being no road open to it. When the keeper moved into this hired house it was the only one vacant near the river. He is now looking for some more suitable dwelling, for which he expects he will have to pay at the rate of about $120 a year, and this from his salary which is $580 a year, thus leaving $460 a year for his services.

The Light-House Board is of [the] opinion that good men will not long remain in positions under such conditions. It thinks that the interests of the service and efficiency of the station would be promoted by building a dwelling, with a boathouse, for its keeper upon United States land, on the river bank, as near the light-house as is found practicable.

It is estimated that for $5,000 a site could be purchased on the shore in the vicinity of the light, and that a dwelling and boathouse could be built thereon.

This letter was included in the Lighthouse Boards annual report for both 1905 and 1906, but it is not believed that a dwelling was ever built for the keeper of Sunken Rock Lighthouse.

After just three years in the Lighthouse Service, Horace E. Walts was transferred in 1912 from an assistant at Oswego to head keeper of Sunken Rock Lighthouse. Keeper Walts son Max recalls rowing to the lighthouse with his father to maintain the light. Every morning after extinguishing the light, Walts would cover the Fresnel lens with a white linen shroud to protect the valuable collection of prisms set in brass.

Keeper Walts was awarded the inspectors efficiency star for an amazing string of nine consecutive years, and he was also commended for the rescue on the night of August 6, 1916 of a man in a skiff that was nearly run down by a steamer.

The characteristic of Sunken Rock Lighthouse was changed from fixed red to fixed green in 1931, and on November 21, 1934 the light was electrified, increasing its intensity to 1,500 candlepower. Keeper Walts, who had also been looking after automated Sister Islands Lighthouse and five flashlight stations, resigned in July 1937 due to poor health. Edward Sweet, Jr. was then made responsible for Sunken Rock Lighthouse and several other automated lights in the area.

Sunken Rock Lighthouse is now owned by The Saint Lawrence Seaway Development Corporation and was solarized in 1988.

Lighthouses and modern navigational equipment still cannot prevent all shipwrecks. At approximately 10:40 p.m. on the night of November 22, 1974, the 640-foot Roy A. Jodrey was upbound on the St. Lawrence River having just passed Sunken Rock Lighthouse with a load of 20,500 tons of iron ore pellets. This was the ships forty-fifth trip of the season, but was about to become its last. Visibility was around four miles, and as the vessel approached Pullman Shoal Light, the captain, feeling unsure of the ships position, ordered hard left rudder. This corrective action was too late, and the Roy A. Jodrey struck the shoal. The captain immediately awakened all on board and, as the vessel was taking on water, decided to beach it near the Coast Guard station on Wellesley Island.

Safely aground, the crew stood helplessly by as the Roy A. Jodrey slowly filled with water and at 3:02 a.m. lost its toehold on the rocky shore and sank to the river bottom. The ship, with its bow at a depth of 140 feet, is now a popular, though very technical, dive site.

For a larger map of Sunken Rock Lighthouse, click the lighthouse in the above map.

The lighthouse is owned by The Saint Lawrence Seaway Development Corporation. Grounds/tower closed.