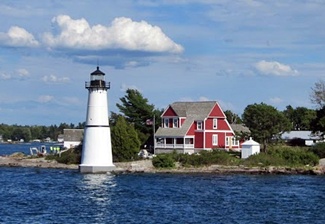 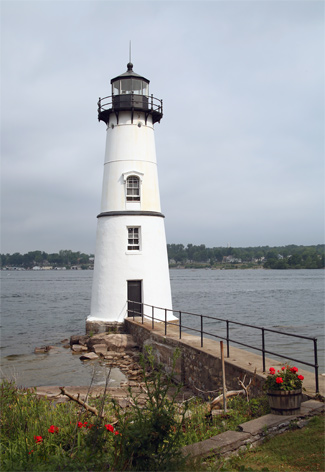 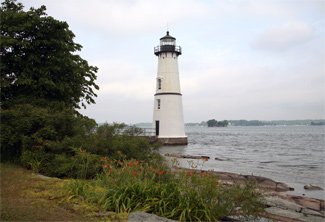 On March 3, 1847, Congress appropriated $6,000 for three lighthouses to mark the Thousand Islands area of the St. Lawrence River. The next month, Crossover Island, Sunken Rock, and Rock Island were purchased from Chesterfield and Mary Ann Pearson, and Azariah and Mary Walton for $250 to serve as the sites for the three beacon lights. Rock Island Lighthouse, a one-and-a-half-story brick dwelling with a lantern centered on its pitched roof, was constructed that same year, and on May 15, 1848, Chesterfield Pearson, the former co-owner of the island, was appointed first keeper of the light. Pearson cared for the beacons array of six oil lamps and associated fourteen-inch reflectors for just over a year before being replaced by John B. Collins. William Johnston, the next keeper, was certainly the most notorious to serve at Rock Island. In 1838, the British were facing an armed uprising against their rule in Canada known as The Patriots War. William Johnston was a loyal Canadian citizen until the War of 1812, when he fled to the United States and served as a spy for his new country. Intimately familiar with the labyrinth of passages in the Thousand Islands, Johnston was declared Admiral of the Patriot Navy of the East and led a band of American sympathizers against the British. On the night of May 29, 1838, Johnston and thirteen of his men, painted as Indians, commandeered the British steamer Sir Robert Peel. Additional men had been promised to help crew the Peel, but when they failed to appear, Johnston maneuvered the vessel into the stream and set it afire. After drifting a short distance, the steamer became lodged on a small island, since known as Peel Island.

For his acts, Johnston was declared an outlaw and nicknamed Pirate of the Thousand Islands. He avoided capture during the remainder of the conflict, and in March 1841 he personally took a signed petition calling for his pardon to President Van Buren in Washington. As told by Johnston, Mr. Van Buren scolded me for presuming to come there with such a petition; but I waited ten days, presented it to President Harrison, and he pardoned me.

On April 12, 1853, Johnston began serving as keeper of Rock Island Lighthouse. Benson J. Lossing, author of The Pictorial Field-Book of the War of 1812 and who twice paid a visit to Rock Island while Johnston was keeper, left the following statement regarding Johnstons service. His offense was finally overlooked, and for several years the government that offered a reward of $500 for him as an outlaw was paying him $350 a year for taking charge of one of its light-houses, in sight of the spot [Peel Island] where the offense was committed!

In 1855, the lantern atop Rock Island Lighthouse was refitted and equipped with a sixth-order Fresnel lens, which provided a stronger beam for mariners. In 1873, the Lighthouse Board noted the following on Rock Island: A new tower is imperatively necessary. The dwelling might be repaired, but it is not considered economical in the end to do so, as it would only be postponing the building of a new one a few years, and it would probably cost less to build tower and dwelling together now. An appropriation of $14,000 is required for a new tower and dwelling.

The original tower atop the dwelling continued to serve until 1882, when a detached iron tower was erected on a concrete pad poured on one of the islands numerous rocks. Sunken Rock and Crossover Island also received similar towers the same year. Work on a two-story, eight-room Victorian dwelling began in May 1884 on a high spot near the middle of the island and was completed in August. That same year, a well was sunk through granite to obtain water at a depth of thirty-six feet, and the stations boathouse was rebuilt.

The new commodious dwelling was definitely appreciated by the keepers. The new iron tower, however, had a problem  its height was not great enough to make the light visible over the keepers dwelling. Although this deficiency may not have been the cause, the three-masted schooner Vickery did run aground near the lighthouse on August 15, 1889. Due to the abundance of confusing cottage lights that lined the river, the vessels captain stopped at Clayton to take on board a pilot, but not fifteen minutes after departing that town, the Vickery struck a shoal at 10:30 p.m. Enraged with the pilot, the captain drew his revolver, but the first mate deflected the captains shot and tossed the revolver overboard. As the vessel was quickly settling, the crew abandoned ship and spent the night at the lighthouse hosted by Keeper Michael Diepolder.

For years, Keeper Diepolder petitioned the Lighthouse Board to elevate the tower on Rock Island so the light would be unobstructed. In the fall of 1894, a work crew finally arrived on the island and constructed an octagonal base of red granite that raised the tower five feet. Prior to this, a small lantern light with a reflector had been shown from the veranda of the keepers dwelling in the direction of Thousand Island Park to complete the illumination of the navigable channel. In time for the opening of navigation in 1899, the color of the lighthouse was changed from brown to white.

Early in the morning of July 16, 1901, forty-eight-year-old Keeper Diepolder suffered a heart attack while going for an early morning swim in the river. Though stricken, he managed to pull himself up onto the dock and stumble into the nearby workshop where he was later found dead by his wife. After burying her husband, Emma Diepolder returned to the station and served until September, becoming the first and only female keeper of Rock Island.

The raised tower still must not have been considered adequate as in the spring of 1903, five workmen constructed a conical brick base just off the northern side of the island and installed the old iron tower on top of it. This new fifty-foot tower was connected to the island by a walkway made of rubble stone and concrete. A temporary lens-lantern light was exhibited from March 30 to April 30 while the work was carried out. On April 10, 1904, the color of the light was changed from white to red, and around this time, the tower received a fourth-order Fresnel lens. An iron oil house was erected on the island in 1905.

In 1909, an article appeared in a Utica newspaper touting the fine table that Willard Cook, a one-armed optimist, had crafted in his eighty-sixth year. Years earlier, Cook left his wife and four children and marched off to fight in the Civil War, feeling he ought to do something for the support of the best government that the world ever had. During the Second Battle of Bull Run in August 1862, Cooks right elbow was shattered by a bullet. As his company retreated, Cook scurried to a ditch, applied a bandage to stop the bleeding, and then under the cover of darkness, reached a cabin where surgeons amputated his arm. Cook was discharged two weeks later and subsequently served as doorkeeper of the state assembly and census worker, before accepting an appointment as keeper of Rock Island in 1870.

Besides being an optimist, Cook seemed to possess a good sense of humor as indicated by his entry in the logbook for July 16, 1872. Weather hot and dry. Flies still continue to inspect the light nights and do not pay any attention to the placard of instruction to visitors, but will persist in lighting and walking on the glass of the lantern, to the great annoyance of the keeper, who has used all the gentle means he is master of, for their removal.

The following logbook entries give additional insight into Keeper Cooks life at the lighthouse:

Aug. 2, 1872: Today President U.S. Grant and wife, General Sheridan and Mr. Pullman, passed down the river at 8 oclock pm in a Steam Yacht, destination to Pullmans island near Alexander Bay. It is understood that President Grant is out for a pleasure excursion and not to swing around the circle for the purpose of making speech. Such a wonderful man.

May 10, 1875: A wild duck flew through one of the plate glass of the lantern breaking the center of the glass large enough to let the duck through into the lantern where the keeper caught him. It injured the duck so badly that the keeper killed him the next morning, and also had to put in a new plate glass.

Apr. 17, 1876: I am lighting the light for the keeper, he being kept away from the station by reason of sickness of his wife, which terminated in her death on Sunday at noon, the seventh day of May at the Walton house in Clayton where the keeper and family lived during the winter.

May 10, 1876: Keeper resumed his duties as light keeper after the burial of his wife on the 9th of May.

May 12, 1876: Keepers two daughters left the station for their homes each taking with them a child of the keeper to live with them, thus leaving the keeper alone at the station to perform his duties as best he can. This light is a one man light.

Sept. 26, 1876: Keeper married today to Mrs. Jane Taylor by Rev. George Rockwell of Alexandria Bay on board Steam Yacht Hermie while running below Fredrick Island towards Fishers Landing at 12 ½ oclock pm. Took dinner at Grand Central and returned to light house after dinner to be ready for duty as light keeper.

The 1909 newspaper article written on Willard Cook concluded by noting he had led a busy life that might well be emulated by many who are not handicapped as has been this plucky, optimistic old gentleman.

Rock Island Light was changed to fixed green in 1931, and in 1939, generators were installed inside the oil house and an electrical conduit was run to the tower to electrify the light.

Coastguardsman Dennis Carroll served as the stations final keeper, leaving the island in December 1956. The last time Rock Island Light appeared on the Coast Guards published Light List as an official navigational aid was in 1958.

The four-acre island was advertised for public sale in 1968 but was instead transferred to the Thousand Island Bridge Authority in 1971. After plans to make the island a historic site failed, the property was returned to the federal government, and in 1976, the New York State Office of Parks and Recreation acquired Rock Island from the U.S. General Services Administration. Interpretive signage was subsequently installed on the island, and it opened as a state park. Besides the tower, dwelling, and generator building, the island still has a carpenter shop (1882), boathouse (1920), and fieldstone smokehouse (1847), making it the most intact former U.S. light station on the St. Lawrence River.

Restoration of the structures on Rock Island began in 2010, using $1.5 million in federal and state funds, and state parks officials unveiled the island attraction to the public on June 4, 2013. The island is open daily during the summer and on weekends during the shoulder season. Commercial boat tours to the island are offered for those without their own boat.

Located in the St. Lawrence River between Fishers Landing and the western end of Wellesley Island.
Latitude: 44.28063, Longitude: -76.0171

For a larger map of Rock Island Lighthouse, click the lighthouse in the above map.

Distant views of Rock Island Lighthouse are possible from Thousand Island Park on Wellesley Island, Fishers Landing, and the Thousand Islands Bridge, but it is best viewed by boat. Boat tours that let you land on the island are now offered.