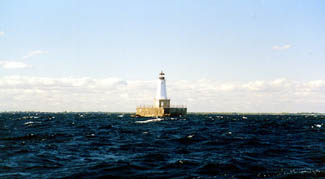 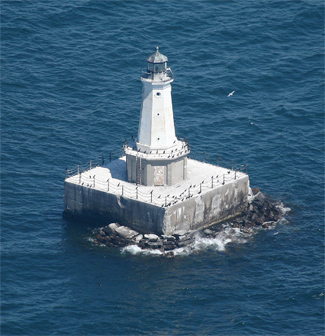 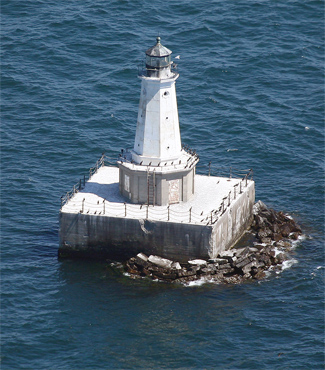 The steamship Rosedale was built at Sunderland, England in 1888 and on her maiden run completed the first ever direct voyage from London to Chicago via the St. Lawrence River and Welland Canal. This accomplishment caused great excitement in the American maritime community, as it proved that grains from the elevators in Chicago, and other ports on the Great Lakes, could be shipped to London without transshipment. Though her first sailing caused a stir, every trip did not turn out quite so well. On December 5, 1897, the Rosedale grounded upon the rocks of East Charity Shoal in the eastern end of Lake Ontario during a northwest gale. The vessel was abandoned to her underwriters, but was eventually towed off by a wrecking company, and, after being rebuilt, returned to service.

During the summer of 1900, John C. Churchill, Jr. visited Charity Shoal to survey and chart the outlying spur known as East Charity Shoal. This hazard, which was about 3,000 feet long and at some points covered by just ten feet of water, lay in the line of transit for vessels using the St. Lawrence River and was thus a great peril to navigation. Later that year, the Lighthouse Board moved to mark the obstacle and issued the following Notice to Mariners: Notice is hereby given that a nun buoy painted red and numbered 2 has been placed in twenty feet of water to mark the easterly edge of East Charity shoal, Lake Ontario, New York. This buoy is about 1 3/8 miles E.S.E. of Charity shoal gas buoy. It is recommended that vessels bound to or from the main channel of the St. Lawrence river, and using the passage between Galloo and Main Duck Islands, should keep to the eastward of this buoy.

This navigational buoy didnt prevent all mishaps, as in October 1912 the steamer Rock Ferry ran aground on East Charity Shoal, and tugs had to be dispatched in an attempt to free her. The Lighthouse Service eventually opted for a more permanent method of marking the shoal, and in May 1934 newspapers in upstate New York advertised that sealed proposals would be accepted by the Superintendent of Lighthouses in Buffalo for a timber crib-concrete superstructure on East Charity Shoal.

The Walls Company was selected as the contractor for the project and had completed enough of the structure so that a temporary light atop a pole was established on the south side of the crib on November 24, 1934 and the lighted buoy was discontinued. The foundation consisted of a fifty-foot-square crib, whose height varied from eleven to fourteen feet to fit the shoals contour. Constructed ashore in an inverted position, the crib was launched, righted, towed to the site, and sunk in place by precast interlocking concrete blocks placed over the outer row of the cribs pockets. The cribs center pockets were filled with stone, while the outside pockets were filled by concrete placed by tremic. A reinforced concrete slab was then placed over the entire pier and atop this a one-story deckhouse, also of reinforced concrete and octagonal in form, was built to support an octagonal iron tower. A central room in the concrete pier measures twenty by forty-four feet, while the deckhouse stands eleven-and-a-half feet tall and has a diameter of roughly twenty feet. The top of the concrete pier is approximately eighteen feet above lake level.

After the tower was installed on the deckhouse in 1935, a fourth-order Fresnel lens was placed in the towers lantern room and, using acetylene as the illuminant, a 1,300-candlepower flashing light was produced at a focal plane of fifty-two feet above low water depth. The entire project, including riprap to protect the foundation, cost $95,125.

The octagonal iron tower at East Charity Shoal has the distinction of having served at two stations and on two different Great Lakes. It was first installed in 1877 at the end of a pier in Vermilion, Ohio to mark the entrance to the Vermilion River from Lake Erie. After the beacon had been in service for over fifty years, two teenage brothers, who lived next to the harbor, noticed that the lighthouse had developed a lean after the pier had been damaged by an ice storm. The father of the two boys contacted the Lighthouse Service, and not long thereafter the heavy tower was replaced by a much lighter automated tower.

The residents of Vermilion were fond of the old red and white pierhead beacon, and when the octagonal tower was taken away it was as if a member of the community had been lost. Years later, after his childhood home had been converted into the Inland Seas Maritime Museum, Ted Wakefield, one of the two boys who had noticed the lean, championed a fundraising drive to build a replica of the 1877 tower for the museum grounds. His dream was realized during the summer of 1991, when a crane lifted the newly cast tower onto its prepared foundation overlooking Lake Erie.

For years, Vermilionites did not know the fate of the 1877 lighthouse. Most thought it had ended up on the scrap heap, but the real answer was revealed when Olin M. Stevens, of Columbus, Ohio, visited the Inland Seas Maritime Museum. Stevens came seeking additional information on his grandfather, Olin W. Stevens, who was a third generation lighthouse keeper, and when he learned the museum was trying to determine the fate of the 1877 tower, he realized he had just recently found the answer. While searching for information on his ancestors to give to his grandchildren, Stevens opened an old trunk and discovered a newspaper article that told about the service of his grandfather at Tibbetts Point Lighthouse. A portion of the article read, Altho this is his first duty on Lake Ontario, Charity Shoal light, visible from the Tibbetts Point headland, is an old friend. The tower upholding the gas lamp on Charity formerly was under Keeper Stevens charge at Vermilion, near Lorain. Victim of an ice shove, it was salvaged and taken to Buffalo, where it was assigned to Charity. The mystery had been solved.

Although it was never staffed, East Charity Shoal Lighthouse was still responsible for saving the life of at least one individual. Dr. Joseph G. Reidel, a thirty-seven-year-old physician from Syracuse, was sailing on Lake Ontario with his wife and Dr. and Mrs. W. Hall of Watertown on August 5, 1955, when winds estimated at seventy mph struck their dragon class sloop. Dr. Reidel was washed overboard by the wind-whipped sea and for an hour was able to tread water and keep sight of the sailboat while his wife and friends desperately tried to rescue him or get him a life jacket. Neither effort was successful, and Dr. Reidel was presumed lost. As it started to get dark, Reidel noticed the glint of a lighthouse and decided to swim toward it. Reidel swallowed a lot of water and suffered leg cramps for a stretch of forty minutes, but as he struggled to stay afloat he kept repeating to himself, This cant happen to me but it will unless I get there.

After more than eight hours in the water, Reidel pulled himself up onto the pier at East Charity Shoal. Exhausted, he soon fell asleep and was rescued at 5:30 a.m. the following morning by three fishermen. Reidel was eventually taken to Cape Vincent, where he was reunited with his wife and friends.

Though alone and surrounded by a vast body of water, East Charity Shoal Lighthouse will always be cherished by the residents of Vermilion and a grateful physician from Syracuse.

In July 2008, East Charity Shoal Lighthouse was declared surplus by the Coast Guard and pursuant to the National Historic Lighthouse Preservation Act of 2000 was made available at no cost to eligible entities defined as federal, state and local agencies, non-profit corporations, educational agencies, or community development organizations for education, park, recreation, cultural, or historic preservation purposes. Qualified entities had until September 23, 2008 to submit a letter of interest. After no taker was found, an online auction for East Charity Shoal Lighthouse was initiated on May 5, 2009. The first bid of $10,001 came in on July 6, and the lighthouse eventually sold on August 27, 2009 for $25,501 to Cyrena Nolan of Dallas, Texas. Nolan plans to turn the second floor of the tower into a bar and looks forward to watching freighters slip past her new summer home from the comfort of a great room in the concrete pier.

For a larger map of East Charity Shoal Lighthouse, click the lighthouse in the above map.

On a clear day, East Charity Shoal Lighthouse can be seen with binoculars from Tibbets Point, but for a good view a boat or plane ride is required.

The fourth-order Fresnel lens used at East Charity Shoal Lighthouse is on display at the Coast Guard base in Buffalo, New York.