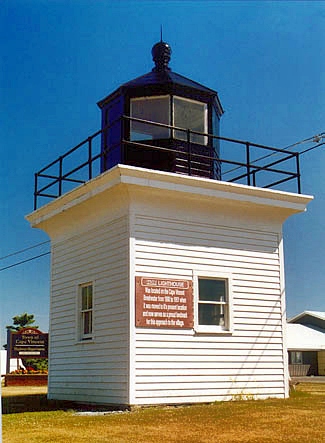 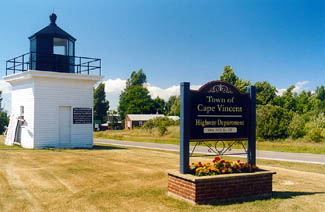 Billed as the only town in the United States where you can enjoy the beauty of the St. Lawrence River and Lake Ontario, Cape Vincent is home to two lighthouses that helped mark the important transition from lake to river: Tibbetts Point Lighthouse and Cape Vincent Breakwater Lighthouse. In his 1854 A History of Jefferson County in the State of New York, Franklin Hough wrote: A breakwater in front of the piers at Cape Vincent is demanded by the commercial wants of the place, and it is presumed will ere long be built by the general government who can not long neglect an improvement so obviously necessary. It turns out the government did neglect the needed breakwater for some time, as it wasnt until March 3, 1899 that an act was passed providing for a 1,400-foot-long timber crib to be built parallel to and 500 feet from the railroad wharf. The first section of the breakwater was finished in 1900, and over the next several years, the breakwater gradually grew to its preordained length through the expenditure of nearly $200,000.

John Larock transferred from Crossover Island to become the first keeper of the breakwater lights. While he had to find his own accommodations in town, a rented boathouse was provided for storing the small boat he used to row to and from the breakwater. The Lighthouse Board deemed it essential for the efficient and proper care of the station that a dwelling and boathouse be built on conveniently located land and requested $5,000 in 1902 to procure a proper site and construct the buildings. This request was repeated the next two years, but no evidence of the buildings being built is found in the reports of the Lighthouse Board.

Late in 1904, James Stratford, a blacksmith in Cape Vincent, brought a case against Keeper Larock to recover damages for the alleged alienation of the affections of the plaintiffs wife, who at the time of the complaint was living out of town with her mother. Keeper Larock was single at the time of the alleged alienation, but was married the day before the action was brought against him. No outcome of the case was found in subsequent editions of the newspaper announcing the claim.

In November 1906, the eastern tower was moved 500 feet father east and placed atop concrete piers to the mark the end of a recently completed section of the breakwater. A 500-foot-long lifeline, consisting of a 7/8th-inch cable supported by two-inch wrought-iron pipe posts at a spacing of ten feet, was installed on the breakwater to help the keeper safely reach the eastern light in inclement weather. Click here for a view of the western light in 1911. In 1915, the eastern light was moved another 250 feet to mark the end of the completed breakwater, which now measured 1,381 feet long.

Halsey W. Crapo was appointed keeper of the Cape Vincent Breakwater Lights in 1912, after entering the Lighthouse Service in 1909 and serving at Cleveland and Lorain, Ohio. Keeper Crapo was known as a dedicated keeper, having received the efficiency flag for maintaining the model station in the district in both 1917 and 1927.

On June 5, 1929, Keeper Crapo, who was also serving as harbor master at the time, performed his normal morning duties at the lights and then, shortly after having lunch at home, complained of chest pain. A doctor was promptly summoned, but efforts to help Crapo failed, and the forty-one-year-old keeper passed away less than an hour after being stricken. Frank L. Sellman, who had previously served as head keeper of Ashtabula Lighthouse, succeeded Crapo as keeper at Cape Vincent.

On June 28, 1939, the intensity of the breakwater lights was increased by changing the illuminant from incandescent oil vapor to electricity. In 1951, the old wooden towers were removed from the pier and replaced by white skeletal steel structures with tankhouses. Fifth-order Fresnel lenses were being used in the wooden towers at the time they were removed. The one surviving wooden tower stands beside Route 12E on the southern outskirts of Cape Vincent, now welcoming travelers arriving by land rather than by sea. A local man acquired the second tower, and his children enjoyed using it as a playhouse before it fell into disrepair and was demolished.

For a larger map of Cape Vincent Breakwater Lighthouse, click the lighthouse in the above map.

The lighthouse is owned by the Village of Cape Vincent. Grounds open, tower closed.