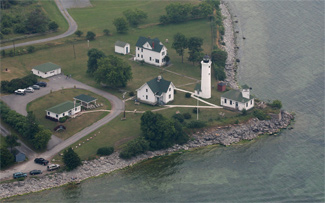 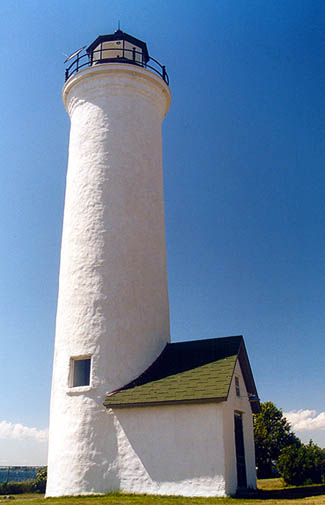 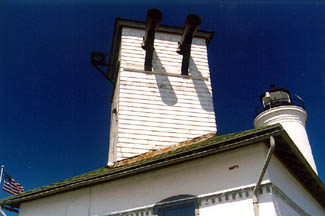 In early 1827, Captain John Tibbetts of Troy, New York deeded three acres of land near the point where Lake Ontario flows into the St. Lawrence River to the Federal Government, and that May articles of agreement were signed between Elbridge Potter and John Canfield, collector of customs at Sackets Harbor, wherein Potter agreed to build a lighthouse, lantern, dwelling house, kitchen, and an outhouse on the parcel. All the construction was to be completed at a cost of $1,747 by October 1st. The lighthouse, whose diameter was to be eighteen feet at the base and nine feet at the top, was to be built of stone with a height of thirty feet. The dwelling was to be thirty-four by twenty feet with two rooms, divided by an entry and fireplace, on the first floor. Stairs in the entry led to the second floor where chambers were to be lathed and plastered. Placed in operation in 1827, Tibbetts Point Lighthouse exhibited the light of nine lamps set in fourteen-inch reflectors from its octagonal lantern room, and its first keeper was Judah Williams. In an 1838 report, Naval Lieutenant C.T. Platt found this very useful light to be in bad order and the associated keepers dwelling to be in a bad condition. The dwellings roof and the lantern atop the tower both leaked. The tower required a new coat of Roman cement, and the dwelling needed a little painting. All these repairs, according to Platt, could be made for an estimated one hundred and twenty-three dollars.

In 1852, the Lighthouse Board, responding to a numerously signed petition from parties interested in commerce on Lake Ontario and the St. Lawrence River, requested funds to rebuild the notoriously inefficient light long neglected on Tibbetts Point. Congress provided $5,000 on March 3, 1853, and the work was completed on July 15, 1854. The towers sparkling new fourth-order Fresnel lens, illuminating 270° of the horizon, was first activated a few weeks later on August 1st. The following description of the lighthouse was printed in papers:

The second Fresnel light on the great northern lakes has recently been erected at Tibbetts Point, Lake Ontario. The shaft is of brick work, 47 feet high, and 12 ½ feet in diameter at the base. The lantern is an octagon, 6 ½ feet in diameter, and 15 feet high, comprising seven lights of French plate glass, 40 by 30, and 3/8 ths of an inch in thickness, clear as crystalthe eighth, or remaining side of the octagon, being an iron door.

At the age of forty-four, Adam Cratsenberg enlisted in the 25th regiment of the New York volunteers and went off to fight in the Civil War. Although he was old enough to be the father of most of his comrades, Cratsenbergs patriotism compelled him to take up arms for his country. After fighting in the battles of Rappahannock Station, Antietam, Fredericksburg, the Wilderness, and Spotsylvania Court House, Cratsenberg lost his left arm on June 2, 1864 in the Battle of Cold Harbor and was captured. Cratsenberg survived the harsh conditions at Libby Prison in Richmond,Virginia, and after the war, he was appointed keeper of Tibbetts Point Lighthouse, a position he held for nearly twenty years. A staunch Republican, Cratsenberg feared he would lose his position after the election of Grover Cleveland, the first Democratic President following the Civil War, and decided to resign in 1885 before he could be replaced by a Democrat appointee.

In 1877, the Lighthouse Board noted: The buildings at this station are old, much decayed, and too small to afford proper accommodations for the keepers. This light is at the entrance to the Saint Lawrence River from Lake Ontario. It must always be an important aid to navigation and should be rebuilt. It is recommended that an appropriation of $10,000 be made for rebuilding this station.

A new two-story, frame dwelling was built for the station in 1880, replacing the old one which was described as a complete wreck, and in 1882, the brick-work of the tower was rebuilt above the parapet-wall and the tower was provided with a new lantern having a wooden deck covered with copper. The lighthouse now stood fifty-nine feet tall and tapered from a diameter of twelve feet at its base to eleven feet at the lantern room.

In 1890, the Lighthouse Board noted in its annual report that it was important that the stations location be made known at all times and in all kinds of weather and requested $4,300 for the establishment of a steam fog signal. This request was repeated for years until the amount was finally approved on March 2, 1895. Still, the brick fog signal house and duplicate ten-inch whistles were not ready until the opening of navigation in 1897 as the bids for furnishing a duplicate steam fog signal were all rejected for being too expensive or for not conforming to the specifications. Later in 1897, a stone wall, three feet thick, twelve feet high and sixty-five feet long, was built at the foot of the bank near the fog signal to protect the point from further erosion.

The fog signals characteristic was originally a three-second blast every ninety seconds, but this was changed to a three-second blast followed by alternate silence intervals of seventeen and thirty-seven seconds in 1900. To provide water for the steam-powered signal, a reservoir was excavated in the rocky bank near the signal house and connected to the lake by an inlet channel. The steam whistle was typically in operation around 200 hours each year and consumed roughly nine tons of coal.

Along with their families, the two keepers, now needed to staff the station since the establishment of the fog signal, were living in the small 1880 dwelling, much to the discomfort of both. A new dwelling for the assistant keeper was first requested in 1898. At that time, $3,500 was deemed sufficient for its construction, but by the time the funding was finally made available in 1906, the cost had risen to $4,000. The stations second two-story keepers dwelling was built in 1907. A square oil house, with a capacity of 540 gallons, was erected at the station in 1905.

The Montonna family watched over Tibbetts Point Lighthouse for half a century, starting with the appointment of David Montonna as keeper in 1885. Davids son William became assistant keeper in 1897, the year before the end of his fathers term of service, and would serve as head keeper from 1898 until his retirement in 1937. In 1912, the Oswego Daily Times carried the following paragraph on Keeper Montonnas service.

The Tibbetts Point lighthouse above Cape Vincent, marking the entrance to the American channel of the St. Lawrence, flies a white pennant bordered with red and bearing a black lighthouse. This is neither a signal of distress nor a warning to the weary mariner, but it is an honor signaling the Tibbetts point light and its keeper, W. E. Montonna, from among all of the 75 light houses between Detroit and Ogdensburg as the best kept and neatest light and grounds in the district. It is what is known in the service as an efficiency pennant.

Besides maintaining the station in fine order, Keeper Montonna also kept an eye on vessels passing the station, and in 1922, he was commended for supplying gasoline to the fish tug Cole and the cabin cruiser Miss Esther May so they could reach port.

At the opening of navigation in 1927, an air diaphone fog signal, sounding a three-second blast every thirty seconds, replaced the old steam whistle. On November 6, 1930, the intensity of the light was increased by changing the illuminant to electricity, and at the opening of the following season, the characteristic of the light was changed from fixed to an occulting light that was on for six seconds and then eclipsed for four seconds. As an additional aid to mariners, a Class D marker radiobeacon was established at Tibbetts Point in 1949. In 1952, the radiobeacon was changed from Class D to Class C, which doubled its range from 10 miles to 20 miles.

The Coast Guard assumed responsibility for Tibbetts Point Lighthouse in 1939, but a civilian was in charge of the light until Edward Sweet retired in 1967. Keeper Sweet served as an assistant keeper of Lorain Lighthouse in Ohio for five years, starting in 1927, and was then responsible for Cross Over Island Lighthouse for five years and Sunken Rock Lighthouse for twenty-one years before being transferred to Tibbetts Point Lighthouse in 1958. When Keeper Sweet retired in 1967 with forty years of service, he was one of the last civilian lighthouse keepers. During the winters, when the station was closed, Sweet would pass his time by carving fancy wooden duck decoys.

The light was automated in the early 1970s, but Coast Guard personnel remained at the station through 1981. The keepers dwellings did not remain vacant long after the Coast Guard left, as they were opened as a youth hostel in 1984. The Town of Cape Vincent acquired the lighthouse in 1991, but the Tibbetts Point Lighthouse Society, formed by Shirley Hamblen in 1988, carries out the care and restoration of the tower. A visitors center, built by the town and staffed by the society, was added to the grounds in 1993. After renovations, the fog signal building was opened to the public in 1998.

For a larger map of Tibbetts Point Lighthouse, click the lighthouse in the above map.

The lighthouse is owned by the Village of Cape Vincent. Grounds open, tower closed.