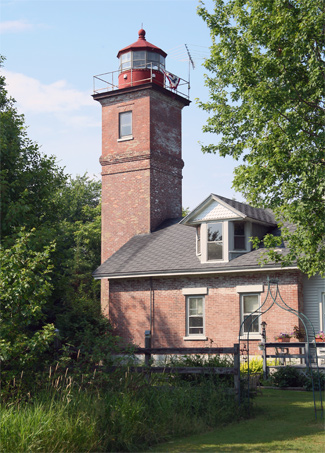 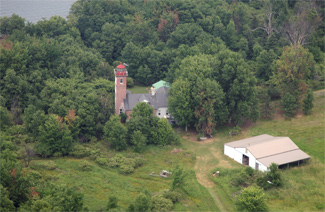 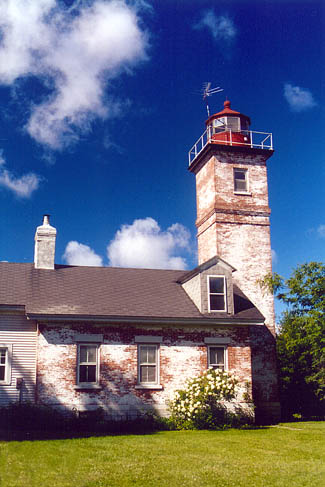 During the War of 1812, Sackets Harbor served as headquarters for the U.S. Navy on the Great Lakes and was also home to a multitude of shipwrights, carpenters, and sailors who helped construct and man the fleet. On the morning of May 29, 1813, Sir George Prevost, governor-in-chief of British North America, attacked Sackets Harbor hoping to score a convincing victory while the majority of the American forces were attacking Fort George at the other end of Lake Ontario. The British landed on Horse Island, which is located a mile or so west of the harbor and attached to the mainland at low tide by a causeway. Local volunteer militiamen quickly deserted the island and joined other militiamen and regulars on the mainland to defend the causeway. Frightened by the approaching redcoats with their glistening bayonets, most of the volunteers let fly one burst of musket fire and then quickly turned and fled. One company of militiamen, led by Captain Samuel McNitt, courageously held their ground and, backed by regulars, were able to stop the British advance. When told their side was winning the battle, the fleeing militiamen returned to join in the victory. Seeing this increase of men, the British retreated, thinking fresh reinforcements had arrived, and the Second Battle of Sackets Harbor was over. For his role in the battle, Samuel McNitt was regarded as a local hero, and everyone felt it just when he was later offered the position of keeper off Horse Island Lighthouse.

On March 3, 1831, Congress appropriated $4,000 for a lighthouse near Sackets Harbor, and the following month, the State of New York ceded jurisdiction over Horse Island, which the federal government had purchased from T.L. Ogden for $500. Later that year, a one-and-a-half-story keepers dwelling with a tower protruding from the center of its pitched roof was built on the island.

In 1838, Lieutenant Charles T. Platt submitted the following report on the lighthouse: This is a light on the top of the keepers dwelling, and is lighted with eight lamps, and the same number of reflectors, fixed. It is an excellent light, and is kept in a manner that gives general satisfaction. It is by means of this light that the mariner finds his way to Sacketts Harbor. The light at Horse Island was upgraded in 1857 through the installation of a fifth-order Fresnel lens in the lighthouses lantern room. Samuel McNitt served as keeper of the lighthouse from 1844 to 1860.

In its annual report for 1869, the Lighthouse Board noted the poor state of the structures on the island: General repairs have been made in the tower, dwelling, and barn, to make them useful for the winter only. They are in such dilapidated condition that further repairs cannot be made. It is recommended that a new dwelling, with tower attached, similar to those at Stony Point, be erected in their place as soon as practicable, at an estimated cost of $12,000.

Congress provided the requested funds on July 15, 1870, and work on a new brick lighthouse, set atop a limestone foundation, began the next month using the plans for Ogdensburg Lighthouse, which was under construction at the same time. As the original lighthouse was being threatened by erosion, the new lighthouse was built 300 yards southeast of its predecessor. Most of the work was carried out in 1870, the year inscribed above the door to the tower, but the lighthouse was not completed until April 1871. A neat picket fence was placed around the new lighthouse, and being no longer needed, the old lighthouse was torn down.

In 1883, Horace G. Holloway, a veteran of the Civil War, was appointed keeper of Horse Island Lighthouse. One day, Keeper Holloway noticed a sailboat just off the island. A strong northwest wind had been blowing for some time, churning up the lake, and Holloway commented to his wife that the sea was too heavy to carry the amount of sail which they did. He was soon proven correct, as when he looked out to the lake again the craft had disappeared. Certain that the boat had capsized, Holloway raced to the beach, where he could hear cries of help, and quickly launched the stations boat. Two military men had been aboard the sailboat, and when finally reached, they had been in the water nearly an hour. One man was partly unconscious but his companion was able to help himself into the rescue boat. The Holloways cared for the two men at the lighthouse until they were sufficiently recovered. A boat was then dispatched from the mainland to transport the deeply grateful and now a bit more humble men back to their barracks.

Keeper Holloway served until 1909, when he resigned his position and was replaced by his son-in-law George H. Ward, who transferred from Crossover Island Lighthouse. One day in 1915, Horace Holloway was visiting his friends in Sackets Harbor, when he felt in need of his usual glass of water with baking soda. He went into Mr. Strattons store and was directed to a shelf in the back, where the soda was kept. After drinking the concoction, Holloway soon realized that he had used sal soda, a cleanser, by mistake, and the retired keeper was rushed to the doctor, who used a stomach pump to remove the poison. Keeper Holloway continued to live on Horse Island with his daughter until he passed away in May 1920 at the age of eighty-four. Prior to that final winter, he had been quite active for a man of his age.

A well for the lighthouse was sunk in 1884 through granite to obtain water at a depth of fifty-seven feet. In 1890, the stations Fresnel lens, which was worn out and bruised, was replaced by a new one received from the general depot. The lighthouses square tower received a ten-foot addition in August 1899, raising its height to fifty-five-and-a-half feet.

George Ward was part of a family of lighthouse keepers. His father, James, was a keeper, and three of Georges sons, Frank, Edwin, and Oswald would serve at various lighthouses on Lake Ontario, including those at Rock Island, Tibbetts Point, and Sodus Point. When a boat struck some rocks of Horse Island in August 1918 and sank, Keeper Ward offered assistance and brought the women and children aboard safely to shore.

In 1925, the light on Horse Island was changed from a fixed oil light to an automated flashing acetylene light. Keeper Ward was transferred to Oswego Lighthouse in July 1926, and Horse Island Lighthouse was subsequently listed as unattended. Just fifteen months after taking up his new assignment, Keeper Ward died of typhoid pneumonia, and his body was returned to Sackets Harbor for burial.

After Keeper Ward was transferred, Schuyler Simmons was allowed to live in the lighthouse and farm the islands seventeen acres of tillable land. Simmons was also paid a small salary to see that the light is not tampered with and report should it get out of order. After his first wife passed away in 1922, Simmons married Julia Shay from Montana and worked a farm near Henderson, New York before moving to the island. Simmons passed away in 1933, but his wife remained on the island, hiring a local man to help run the farm. Life on Horse Island seemed idyllic for Julia, who kept a horse, a cow, a young bull that was as friendly as a housedog, and a flock of Plymouth Rock chickens that were so tame that they would perch on her shoulders.

In 1957, Horse Island Lighthouse was declared excess and sold by the General Services Administration to Carl Martin, after an automated light atop a metal skeletal tower replaced the function of the lighthouse. The Martin family kept the lighthouse as a vacation home until 2017, when the island was sold to Campaign 1776, a project of the Civil War Trust, for $800,000. The island is the first War of 1821 land to be saved by the trust, which plans to transfer the property to the New York state park system for inclusion in Sackets Harbor Battlefield State Historic Site. Due to trees that have grown up on the island, only the top of the lighthouse can be seen from Sackets Harbor.

For a larger map of Horse Island (Sackets Harbor) Lighthouse, click the lighthouse in the above map.

From Highway 3 southeast of Sackets Harbor, take Route 62 into town. The road will become Main Street as you enter the town. Proceed straight through town passing the headquarters of the Seaway Trail Foundation and the marina to reach Sackets Harbor Battlefield State Historic Site. At the marina, turn left on Hill Street, right on Washington Street, and then left on Ontario Street. Follow Ontario Street west where you will be able to see Horse Island, though the foliage does not permit a view of Horse Island Lighthouse.