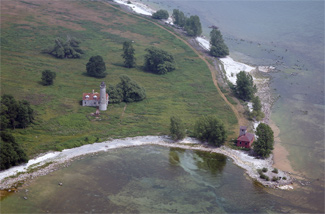 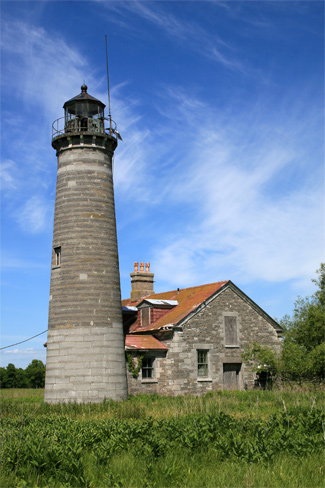 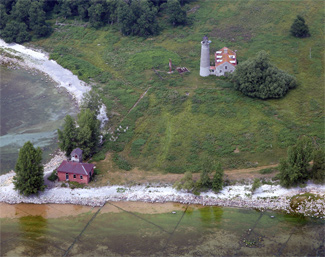 On March 3, 1819, Congress appropriated $12,500 for the construction of a lighthouse on the southwest end of Galloo Island to mark the outer edge of a group of islands and shoals encountered by vessels on Lake Ontario en route to the St. Lawrence River or Sackets Harbor. David A. Ogden received $411.37 for thirty acres on the southwest tip of the island, and Elisha Ely was contracted to construct a dwelling and tower, whose light was first exhibited on October 4, 1820. An article in the Sackets Harbor Gazette of October 5, 1820 announced the activation of the light and provided the following description of the tower.

The base of the building is four feet above the surface of the water, and is 26 feet in diameter, uniformly graduated to one half of its diameter at the summit height of 65 feet. The building is of stone. The lantern is an octagon, containing 21 lights of 14 by 12 glass. Within are 15 patent lamps with reflectors, 2 feet apart, placed in two circles; giving an elevation to the light of 66 feet above the waters surface, and at the distance of 5 miles, gives the appearance of an entire globe of light. The light is distinctly visible at a distance of 22 miles on the lake.

The article noted that the erection of such works of permanent utility bear honorable testimony of the attention of government to the interests of every portion of the union and called for an end to the violation of revenue laws  the turpitude of which is greatly enhanced by the consideration that it robs the government of the means by which such establishments as tend in an eminent degree to the safe navigation of the lake, are erected and supported. The honor of tending the lighthouse, which was the first to be built by the United States on Lake Ontario, was given to Zenas Hastings.

Naval Lieutenant Charles T. Platt visited Galloo Island Lighthouse in 1838, just a year after Goodale Lewis had replaced Hastings as keeper, and reported that the light was in good condition. The lantern deck, however, was extremely leaky, and the tower needed a covering of Roman cement. The shore of the island was then over 300 feet farther inland than it was in 1820, due mostly to a three-foot rise in the lake level. Work on a cribwork to shield the dwelling from lake surge had begun, but, according to Platt, it needed to be extended thirty feet southeast to provide adequate protection. The dwelling was judged to be much out of repair. Its roof leaked, and the settling of its foundation had deranged the window frames.

In 1857, a fourth-order Fresnel lens was installed in the tower, which was noted by the Lighthouse Board in 1864 to be in need of various and extensive repairs and renovations. The Board submitted an estimate of the necessary work, and on April 7, 1866, Congress responded with an appropriation of $15,000 for repairs and renovations.

Work on a new sixty-foot-tall tower and dwelling began late in 1866 and was completed the following year. Gray limestone, quarried on the island, was used to build the new structures, which were linked by a covered passageway. Theo Stevens, the head keeper, moved into the new residence, while the old dwelling was retained for an assistant, a position which was added to the station in 1867.

An attempt to deepen the stations well was made in 1883, but when a depth of 142 feet was reached without any signs of water, the work was suspended. The following year, a new well was driven and sufficient water was found at just sixty-eight feet.

In 1890, the Lighthouse Board, noting that fog and thick weather often obscured the light, recommended that a steam fog signal be established at the station. The recommendation had to be repeated the following five years before Congress finally allotted $5,700 on June 11, 1896. A redbrick fog signal building, measuring thirty-six by twenty-two feet, was built near the shore in 1897, and two ten-inch steam whistles regulated by a Crosby automatic apparatus were installed. A few years later, a circular reservoir, sixteen feet in diameter and twelve feet deep, was chiseled out of the rock near the fog signal to store water for the boilers. In 1899, the assistant keepers dwelling was rebuilt, and earthen sewer pipes were laid for both dwellings.

The gray limestone tower was painted white in March 1902 to make it more conspicuous during the day.

Most keepers on Galloo Island stayed for just a few years, but there were some exceptions. F. Byron Johnson served as head keeper from 1877 to 1906, and his lengthy service was matched by his successor Robert C. Graves, who served from 1903 to 1906 as assistant and from 1906 to 1933 as head keeper.

Willie E. Frazier, who was serving as an assistant on Galloo Island in 1915, gave the following report upon leaving the island for the winter. The government allows us 30 cents a day for provisions, but we farm it and make money. There is no chance to spend anything while we are on duty, either. We have a community system and the thirty acres are split up among the four families. This year we had two and two-thirds acres planted to corn and raised 340 bushels, which we divided. There are two cows, three horses, pigs, chickens, and other animals. I just sent back to one of the women on the island a check for $90 for turkeys which I sold for her when I left. We also raise a large quantity of hay, and sell what isnt needed to feed the stock.

On April 18, 1919, Keeper Graves and Assistant Keeper Frazier went to the assistance of the disabled powerboat Louis Donald, which was carrying a cargo of 10,500,000 minnows, and towed it back to the island. The keepers housed and fed the four men aboard the vessel for four days while they made repairs to their engine. This wasnt the only assistance Keeper Graves rendered during his twenty-seven years on Galloo Island. He was recognized in 1914 for towing a launch four miles to get fuel, but his most courageous rescue came year later, when a father and son aboard a newly purchased motorboat encountered a squall near the island. The storm, coupled with a leak in the hull, soon overpowered the boats pumps, and the motor stopped, leaving the pair to drift helplessly before the storm.

Keeper Graves spotted the boat riding sluggishly on the waves and watched as it struck a shoal and started to break up. Seizing a rope, Graves made his way out to the boat through the battering seas and managed to rescue not only the two men but also a trunk. The men spent the night at the lighthouse and then were taken ashore the next day, where they promptly purchased another boat and continued their mission to see the Thousand Islands.

Robert Graves retired on June 1, 1933 after forty years of government service and after having overseen the modernization of the station. In 1927, an air diaphone replaced the old steam whistle, and the following year, the light was electrified and its characteristic changed to a group of three flashes every twelve seconds. Just a few months after Keeper Graves left the island, the station was linked to the one at Tibbetts Point by radiotelephone.

Warren Leifer joined the Coast Guard shortly after the end of World War II. His first assignment was to Rochester, where he met his wife Doris, and then, after training at the Aids to Navigation School in Groton, Connecticut, the couple was sent to Galloo Island Lighthouse in 1948. The Leifers residence, the frame assistant keepers dwelling that has since been torn down, had to be kept clean in case of inspections. Doris recalls riding around on her husbands shoulders to remove any unsightly cobwebs dangling from the dwellings high ceilings.

While the Leifers were at the station, the light was powered by two old Kohler generators, located in the fog signal building. Late one foggy night, Warren noticed the light kept growing dimmer, so he hurried down to the generators, not bothering to take the time to get dressed. After spending the rest of the night changing spark plugs and tinkering with the finicky generators in the nude, Warren headed back to the dwellings and discovered another keepers wife, a proper Southern girl, looking out a window at him. These nocturnal service runs must have been common, as Doris recalls, I always told him youre gonna get caught, youre gonna get caught and sure nuff he did. The Southern wife never said a word about the incident.

Despite protests from boaters, Galloo Island Lighthouse was automated in 1963, when the power source was changed from direct to alternating current, and a communication line was installed to the Coast Guard boat station on the island to permit the personnel there to operate the light and fog horn by remote control. The lighthouse was added to the National Register of Historic Places in 1983, and in 1997 the Coast Guard, who didnt want to spend the money to maintain the aging buildings, declared the station surplus. Robert Hagemann, Jefferson County Administrator, asked his staff and Jefferson Community College President John W. Deans to put on their creative thinking caps to come up with usage ideas for the historic site, but no workable plan for public ownership could be devised.

With no governmental agencies interested in the lighthouse, the General Services Administration Office of Property Disposal put the property on the auction block with a minimum bid of $50,000. The brick fog signal building and cast-iron oil house were not included in the auction, as they are part of an adjacent twenty-five-acre parcel, owned by the state Department of Environmental Conservation. The four bids submitted for the lighthouse were opened on September 27, 2000, and the winner was Cara C. Divnah of Vallejo, California, with a bid of $87,654. Philip J. Kemper, who the previous year had made a successful $2.47 million bid for most of the rest of Galloo Island on behalf of PRK Holdings Group of Syracuse, came in third, with a bid of $55,000.

Mrs. Divnah and her husband are investors familiar with buying and re-selling unusual pieces of property and bought the lighthouse sight unseen. Just over two months later, the couple put the lighthouse on the market for $395,000, more than four times their purchase price. The lighthouse, which still houses a light maintained by the Coast Guard, failed to sell and has been on and off the market since then. After a failed attempt to sell the lighthouse on eBay in 2006, a dedicated website was created for the lighthouse in 2007, and it was offered for $295,000. The larger privately held parcel on Galloo Island was also on the market in 2007, for an asking price of $12,750,000. The property, which includes an airstrip, seven-bedroom lodge, guest house, and log home, had previously been available for seasonal rentals at a weekly rate of $19,500. In 2015, the asking price for the islands largest parcel was down to $9.9 million.

Located on the southern tip of Galloo Island, which is approximately twelve miles west of Henderson Harbor.
Latitude: 43.888529, Longitude: -76.444378

For a larger map of Galloo Island Lighthouse, click the lighthouse in the above map.

Galloo Island Lighthouse must be seen from the air or water. We have taken a boat out of Henderson Harbor and a plane out of Watertown.