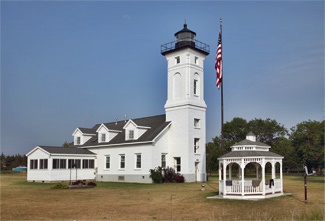 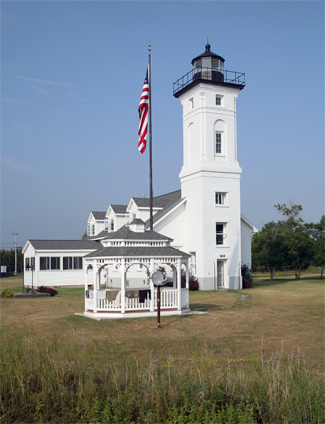 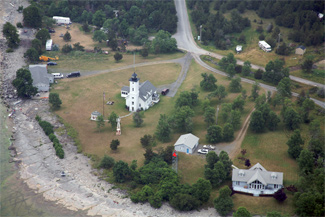 From the air, it is immediately apparent how Stony Point must have received its name, as rocky ledges, extending from the point for some distance, can been seen beneath the clear waters of Lake Ontario. Three miles offshore lies the similarly named Stony Island, and four miles beyond it is Galloo Island, which received a lighthouse in 1820.

Congress appropriated $3,000 on March 3, 1837 for a lighthouse to mark Stoney Point, in the town of Henderson, in the county of Jefferson. The resulting structure, built on five acres purchased from John Littlefield for $100, was finished and operational by the end of the next year, as Naval Lieutenant Charles T. Platt submitted the following report on Stony Point Lighthouse to the Secretary of the Treasury under a date of November 26, 1838.

This is a revolving light, and is lighted with ten lamps, and an equal number of bright reflectors. It is a new light, with the light on the keepers dwelling. The dwelling is two stories in height, which gives the lantern an elevation quite sufficient for all nautical purposes. This is a very useful and important light, and is kept in excellent order. The supplies furnished by the contractor are all right.

The lights first keeper, the one responsible for keeping the light in excellent order, was Wiley Gilbert Nickles, born in 1802. At the age of nineteen, Wiley lost his hands and forearms to cannon fire during a 4th of July celebration in Sackets Harbor. Hooks were later fastened to the ends of Wileys arms, allowing him to feed himself with his left arm and to use a pen with his right. During his thirty years at the lighthouse, Wiley was greatly assisted by his wife and children. They would help with the daily tasks of filling the lanterns with oil, trimming the wicks, and polishing the reflectors, but Wiley always filled out the required government reports. The workload must have become somewhat lighter in 1857, as Stony Point Lighthouse was fitted with a revolving, fifth-order Fresnel lens, requiring just one lamp.

Coincident with the end of keeper Nickles thirty years of service, the 1868 Annual Report of the Lighthouse Board noted that the old dwelling, tower, and outhouses at Stony Point were not considered worthy of repair and recommended they be replaced with new buildings. During the summer of 1869, work began on a new lighthouse, following plans similar to those used for the dwelling and attached tower built at Copper Harbor, Michigan in 1866. The stone used in the lighthouse was quarried near the site, and a new lantern room was provided. The lighthouse was mostly complete by the end of 1869, as only some plastering and outside pointing had to be performed in 1870. Due to the difficulty of accessing the site and the high price of labor, the cost of the lighthouse was roughly $13,000.

Over the years, minor changes and repairs were made to the lighthouse according to the entries for Stony Point in the Annual Report of the Lighthouse Board. For example, the 1882 report noted that a small cellar was excavated under the dwelling and lined with stone, and minor repairs were made to the dwelling. The erection of a new metal oil house and the conversion of the old oil room into a living room were mentioned in the 1897 report. Around 1900, some 106 feet of lead pipe was laid to connect the dwelling with the stations well, which was sunk in 1880.

A major change to the lighthouse was made in 1901, when the height of the tower was built up twenty feet, raising the focal plane of the light from thirty-eight feet to fifty-eight feet and increasing the range of the light. Two other changes to the lighthouse were also made that year: it was painted white to make it a better daymark, and the interval between the flashes of its light was reduced from two minutes to one.

On the evening of December 15, 1902, Keeper George N. Gray of the lifesaving station in Charlotte (Rochester), New York received notice that a ship was in distress on Lake Ontario off Lakeside, twenty-three miles from Rochester. The keeper and his eight surfmen took their surfboat by wagon to the nearest train station and procured a special train to Lakeside, arriving at 9:35 p.m. From there, sleds were used to pull the boat four miles to the lake, passing through six-foot snowdrifts and over bare patches of ground. After reaching the shore at 11:30 p.m., the crew launched their boat and searched fruitlessly in thick vapor and bitterly cold conditions until 3 a.m. Abandoning the effort until daybreak, the crew rested for ninety minutes, and then when the vessel was spotted, rowed twenty miles to reach the crippled craft at 11:30 a.m.

When finally reached, the schooner John R. Noyes and her crew were in a most pitiful condition. The vessel had lost her sails, yawl boat, and both anchors, [and] had her cabin smashed in. She was leaking fast and was heavily encumbered with ice. She was simply a helpless wreck, drifting about at the mercy of the storm. All on board (four men, a woman, and a dog) were suffering from exposure for more than fifty hours and from lack of food for upward of thirty-six hours. They had lost hope, bidden one another goodbye, and were lying on the deck benumbed. Some were hysterical. In a little while all would have perished.

The return trip to shore was difficult with the boat, covered in a layer of ice, being tossed about by breakers. At 4:30 p.m., the exhausted crew, who were assisted at times by some of the shipwrecked men after they were sufficiently recovered, finally reached the shore. The frostbitten rescuers had rowed almost sixty miles over a seventeen-hour period with only a two-hour break. For their valiant efforts, the keeper and his surfmen were awarded gold lifesaving medals.

One member of the crew was Mial E. Eggleston, who not long thereafter would accept a position as keeper at Crossover Island Lighthouse. Then, on February 15, 1906, Eggleston transferred to Stony Point Lighthouse, where he replaced Alden Stevens as keeper.

The steamer Iona, loaded with 450 tons of coal was sailing from Sodus Point to Quebec, when it caught fire on Lake Ontario on May 18, 1912. Just fifteen minutes after the fire was discovered, the crew was forced to take to a lifeboat. Being twenty-five miles offshore, no light on shore could be seen, and clouds prevented the sailors from navigating by the stars. The lake was rough, and waves often broke into the boat, deluging its occupants, as the crew rowed toward where they thought the shore should be. After three hours of toiling, a light was finally seen, and five hours later, the lifeboat approached Stony Point Lighthouse.

As dawn was breaking, the shouts of help by the survivors aroused Keeper Eggleston, who raced to the shore and helped them land. Of the ten survivors, the cook, the only woman on board, had the narrowest of escapes. She was sleeping when the fire broke out, and when aroused, had to exit through her window as the fire was raging outside her door. The crew was cared for by Keeper Eggleston until leaving the next day for Watertown, where they caught a train for their homes.

On April 28, 1926, the characteristic of Stony Point Light was changed to alternating red and white flashes to distinguish it from other lights in the area. The light was electrified on August 17, 1938.

Keeper Eggleston would serve at Stony Point for thirty-six years, finally retiring on April 1, 1942. Wiley Koepka, keeper on Galloo Island for the previous nine years, was transferred to Stony Point lighthouse to replace Eggleston and to guard the property during the emergency created by the war.

Koepka was the last keeper at Stony Point Lighthouse and served until November 1946, when the light was discontinued for the season. As part of the automation process, the characteristic of the light was changed in 1947 to a red flash every ten seconds. In 1959, a white skeleton tower was erected near the shore to display a light at a focal plane of twenty-five feet, and the light in the old tower was discontinued. The lighthouse was sold off for $9,107 in 1960 to the Kotlers from Pennsylvania, who then sold it to Richard Costello of Webster, New York in 1964. In 1966, the lighthouse was nearly destroyed when a fire in a nearby barn spread out of control. After owning Stony Point Lighthouse for about thirty years, the Leonard family placed it on the market for $650,000 in 1998 and then reduced the price to $399,000 in 2001.

While vacationing near Stony Point in July 2002, John and Cheryl Faust learned from a forward but friendly older gentleman that a nearby lighthouse was for sale. The couple briefly saw it from their boat one day, and after returning home, Cheryl looked the property up on the internet. After contacting the real estate agent, the couple drove back to the lake from New Jersey just two days after returning home, toured the lighthouse, and two days later purchased it for $272,500.

Once the Fausts started restoration work, they quickly found that the lighthouse was not structurally sound and were forced to gut the structure. The roof had to come off along with the second floor, leading concerned neighbors to fear that the new owners were going to tear the lighthouse down. Cheryl Faust says the restoration was reminiscent of the movie The Money Pit, and the project certainly must have cost a considerable amount. But the end result was undoubtedly worth it: a gleaming white, beautifully restored lighthouse that the family can enjoy for years to come.

For a larger map of Stony Point (Henderson) Lighthouse, click the lighthouse in the above map.