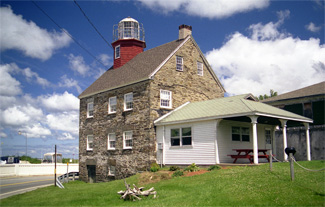 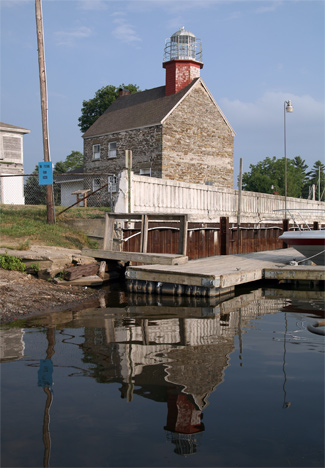 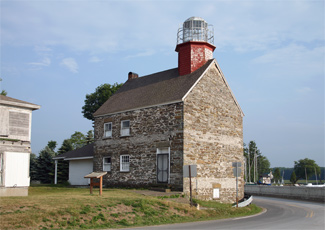 The area at the mouth of the Salmon River received its first white settlers in 1801, after New Yorks Governor George Clinton purchased the land from the Oneida, Onondaga, and Cayuga tribes in 1788. Some believe Selkirk (also known as Port Ontario) received its name in honor of Alexander Selkirk, who spent four years as a castaway on an uninhabited island off Chile. Although Selkirks remarkable story of survival provided the inspiration for Daniel Defoes novel Robinson Crusoe, it is more likely that the inspiration for naming the Town of Selkirk was the Scottish philanthropist Thomas Douglas, 5th Earl of Selkirk, who purchased roughly 4,400 acres on the north side of the Salmon River in the late 1790s.

Early settlers were attracted by the bounteous annual runs of Lake Ontario Atlantic Salmon in the river at Selkirk, which led to naming the stream the Salmon River. While inspecting the river in the early 1830s for the potential construction of piers, a government engineer determined that the river mouth had sufficient depth and breadth for anchoring some thirty ships. Congress appropriated $3,000 on March 3, 1837 for the lighthouse, and approximately 5,760 square feet of land was purchased from Sylvester and Daniel Brown on September 1, 1837 as a site for the structure.

Just a week or so after the land purchase, Jacob Gould, Superintendent of Lighthouses on Lake Ontario, publicized a detailed and lengthy call for bids for the construction of the lighthouse. The notice began, Proposals will be received by me at Rochester until the 10th day of October next, for building a Dwelling and Beacon Light House on Lake Ontario, at the junction of the Salmon River with said Lake in the village of Port Ontario, in the county of Oswego, in said state, of the following description, viz: - The dwelling house to be of stone, 25 feet wide by thirty feet long from outside to outside. The outside walls to be eighteen inches thick, laid in good lime mortar, and pointed in good & workmanlike manner.

The call for bids included the dimensions of the lumber and the weight of the copper sheets that were to be used in constructing the two-story lighthouse whose octagonal tower would extend sixteen feet above the walls of the dwelling. Each face of the octagonal lantern was to have eighteen 9 x 12 lights (panes), and separate proposals were solicited for eight lamps and reflectors to be used as the light source. In addition to the lighthouse, an outhouse with a stone sink was to be built, and all this work was to be accomplished, in a faithful and workmanlike manner, by August 1, 1838.

Local contractors Joseph Gibbs and Abner French were awarded the contract for the lighthouse, but it was a local stonemason, Jabez Meacham, who actually did most of the work, using stone from a nearby quarry. John Box, a local blacksmith, formed the wrought iron railings that encircle and support the birdcage lantern room. The total cost of the lighthouse came in at $2,999.94.

Lewis Conant exhibited the light at Salmon River for the first time in August 1838, and shortly thereafter, Lieutenant Charles. T. Platt stopped by and later filed the following report:

This is a new light, just established, and is fixed on the keepers dwelling. It is lighted with eight lamps, and the same number of bright reflectors, all in first-rate order.

The importance of a harbor at this point is evident on an examination of the chart of lake Ontario. Mexico bay, into which Salmon river empties itself, forms the southeastern extremity of the lake, and is contained between Stony point on the north and Nine-mile point on the south; having a length of shore of above forty miles, with not a single harbor for vessels drawing over five feet. A vessel found within this bay during westerly gales cannot beat out for want of sea-room, and, of course, must go on shore from the want of a harbor. Salmon river discharges near the head of this bay, and is the most considerable stream emptying into it; of course, a better harbor can be constructed here than at any other point in the bay. Off the mouth of the river is found a bar having a depth of water, in different seasons, of from five to nine feet. To remedy this defect of nature, it is proposed to run out a double line of piers, to fourteen feet water. During the past season, about 1,500,000 feet of pine lumber, 200 tons of cheese, 5,000 bushels of potatoes, 50 tons of butter, and a considerable quantity of potash, has been shipped here; flour, salt-fish, lime-stone, and merchandise, constitute the articles generally brought here.

Three years since, the village of Port Ontario was not in existence; seven or eight buildings occupied its present corporate limits; it now contains between five and six hundred souls, and is quite a thriving place.

Keeper Conant served at Salmon River Lighthouse for over a decade before being succeeded by Lucius B. Cole in July 1849. Charles M. Lewis became the third keeper of the lighthouse in October 1854, and during his service the light source was upgraded to a 270° sixth-order Fresnel lens powered by a single Hains Mineral Oil fountain lamp. Albert H. Weed assumed the responsibilities of keeper in March 1857.

Shortly after the lighthouse was completed, two piers, with lengths of over a thousand feet, were constructed at the mouth of the Salmon River to improve the harbor. A canal was proposed for connecting Salmon River to the Hudson River via Lake Oneida and the Erie Canal. This would have linked Selkirk to several major markets, but the canal was never built and the dreams of Selkirk becoming a major port faded. As the importance of the harbor diminished, an official beacon was no longer justified, and Salmon River Lighthouse was deactivated in 1859.

Though the early loss of the lighthouse was unfortunate for Selkirk, it was a blessing for lighthouse historians. Had the lighthouse remained active for just a few more years, its lantern room would most certainly have been upgraded to one with larger panes of glass and thinner sashes that blocked less of the light. Such upgrades were made at lighthouses throughout the country shortly after the use of Fresnel lenses was adopted in the United States. Salmon River Lighthouse has one of the few surviving birdcage lantern rooms. In fact, the only other intact, historic one is at Prudence Island in Rhode Island. Baileys Harbor and Waugoshance Lighthouses both have the old style lantern rooms, but they are badly corroded and no longer have intact glass and sashes.

After its deactivation, the lighthouse was reportedly used by the Lifesaving Service and then lived in by former keeper Lucius B. Cole until his passing in 1890. The following year, a custodian for the property was appointed at a minimal salary, but when it was apparent that the lighthouse would never be reactivated, it was sold at public auction as it was an unnecessary source of care and expense. On October 16, 1895, Leopold Joh, a German émigré, purchased the lighthouse at auction from the government for $155. The lighthouse was first used as Johs private residence before it was incorporated into a hotel complex that Joh started to develop in 1899. While on an errand procuring refreshments for his guests, Joh died of a massive coronary on August 21, 1907. His family continued to operate the hotel until it was sold in 1916 to the Heckle family, who soon doubled the size of the Selkirk Lighthouse Hotel. Known for its German cuisine, fine fishing, and beaches, the resort attracted vacationers from Syracuse and as far away as New York City and Philadelphia.

Jim Walker fell in love with the lighthouse and adjoining marina during a visit in 1986 and persuaded a group of individuals to form a corporation to purchase the property. The property was purchased from Joseph Heckle in 1987, and Walker began to manage the facility. Pestered by persistent requests, Walker eventually opened the lighthouse to overnight stays in 1995 and afterward welcomed visitors from around 100 countries. The lighthouse has been used for weddings, honeymoons, family reunions, and, according to Walker, the sublime and the ridiculous.

Coinciding with the countrys Lighthouse bicentennial celebration in 1989, a Coast-Guard-approved solar light was installed in the historic lantern room, and on August 6 of that year the lighthouse was reactivated as a Class II navigation aid listed as Port Ontario Light. In 2003, the corporation decided to list the marina for sale, but due to its condition, the offers received were not as high as was hoped. Led by a new management group, the corporation later reopened the tackle shop, ran city water to rental cabins near the lighthouse, paved the parking lot, and improved the marina. Those returning to the lighthouse property will detect a noticeable change in the atmosphere and appearance of the physical structures at the marina. New owners took over the property in 2014.

For a larger map of Salmon River (Selkirk) Lighthouse, click the lighthouse in the above map.

From Highway 3 on the northern bank of the Salmon River, go west on Route 5 (Lake Road) just under a mile to Salmon River Lighthouse. Parking is available at Lighthouse Marina just past the lighthouse, where there is also a gift shop.

Salmon River Lighthouse, which has three bedrooms and can accommodate up to eight people, is available for overnight stays.


As the owner has been quoted as saying, the lighthouse does not rise to the level of "the Ritz or a contemporary city hotel," but that wasn't the level its original keepers were accustomed to either. How many chances do you get to have your own lighthouse for a night or two? If you can get in, stay at the lighthouse. It is a nice, homey place to while away a couple of days.