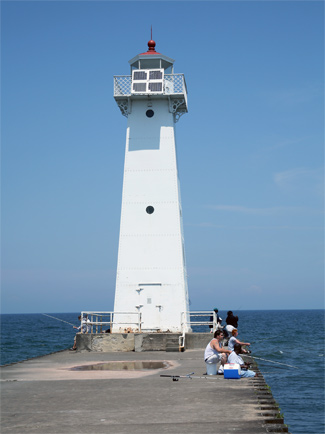 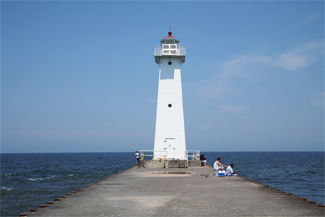 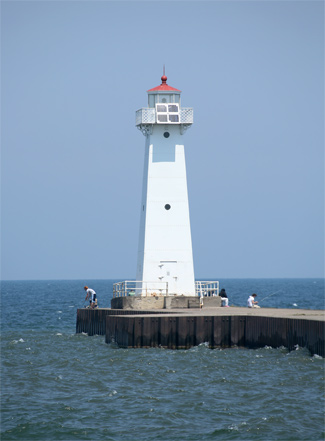 Six-mile-long and three-mile-wide Sodus Bay is the largest natural harbor on Lake Ontario. Native Americans called the shimmering bay Assorodus meaning Silvery Waters, and white settlers, attracted by the bays potential, arrived in the area in 1792. In 1838, Naval Lieutenant Charles T. Platt included the following comments on Sodus Bay in his report to the Secretary of the Treasury. The excellent qualities of this harbor are too well known by the mariner to need further comment, and it must eventually become a port of immense importance in a commercial point of view. Nature has given to it that protection which must entitle it to the most favorable consideration of the Government.

The government had already paid the harbor quite a bit of attention in the form of $4,500 in 1824 for a lighthouse, after William Rochester presented a petition to the House of Representatives in 1822 from sundry inhabitants of New York praying for the erection of a lighthouse at or near the entrance of Great Sodus Bay.

William Wickham was paid $68.75 for three acres of land on Sodus Point on November 20, 1824, and a one-and-a-half-story dwelling and detached conical tower, both built of stone, were completed the following year. The two-room dwelling measured thirty-four by twenty feet and had a kitchen attached to its southern end. The tower stood forty feet tall and housed a revolving light of ten lamps and the same number of nine-inch reflectors. Due to the bluff on which the tower stood, the light had a focal plane of sixty-six feet above Lake Ontario.

Ishmael D. Hill successfully petitioned the Secretary of the Treasury to be appointed first keeper of Sodus Bay Lighthouse. A portion of his petition reads: your Petitioner having done all the service to this Country that was in his power, & having lost all his property in the war [of 1812] now asks your Honor the post of Keeper of this Lighthouse  he is a sailor by profession, well acquainted with the Lake & with the entrance in the Port of Sodus, for which reason your Petitioner thinks he would frequently be of material service to Vessels that might be entering the said Port. Hills loss of multiple vessels in the war and his year spent as a prisoner certainly helped him win the appointment as keeper, but four years later, in 1829, he was disqualified by reason of insanity, and Bennet C. Fitzhugh was appointed keeper in his stead.

In 1828, a project was drawn up to contract the entrance to Sodus Bay to 470 feet by constructing a pair of piers. The piers were built between 1829 and 1834, and in 1837, a stone tower, with a height of nearly thirty feet, was built on the west pier as a mere guide for entering the harbor. Four lamps and reflectors were used in the towers lantern room to produce a fixed white light. In 1854, a sixth-order lens was placed in the pier light, and four years later, a revolving fourth-order lens was installed in Sodus Bay Lighthouse.

The beacon light on the pier was destroyed by a gale in 1857, and the following year a pair of range lights, consisting of lanterns suspended from masts, was established in its place. In 1872, frame towers, whose lower half was painted black and upper half white, replaced the masts. The outer tower was twenty-seven feet tall and displayed a light from a sixth-order Fresnel lens that illuminated the entire horizon, while the inner tower was just eighteen feet tall and displayed a sixth-order light, not visible from the lake, that served as a guide to vessels leaving the harbor. An elevated walkway, 1,150 feet long, was erected on the pier in 1872 to help the keepers reach the outer light in foul weather.

In 1869, the dwelling and tower of Sodus Bay Lighthouse were slightly repaired to make them serviceable for one more winter, but they were not considered to be worth general repair. The Lighthouse Board requested $14,000 for a new dwelling with attached tower, and Congress responded with the necessary funds in July 1870.

Work on the new Sodus Bay Lighthouse began in August 1870 and was completed on June 30, 1871, following the plan used for the lighthouse at Stony Point, New York. The two-story dwelling and attached tower were built of limestone from the Kingston quarries, the same source used to build the lighthouses at Ogdensburg and Sister Islands. The roughly ten-foot-square tower stands just over fifty feet tall and had a focal plane of seventy feet above the lake. The old tower and dwelling were demolished, and the resulting stone and debris were used to build a seventy-foot-long jetty at the west end of the lighthouse lot to prevent erosion of the bank. Stones from the jetty, which extended out into Lake Ontario to a depth of nine feet, have been recovered and used to build the four stone piles that today mark the site of the original dwelling. A metal plaque set on a large rock sits in the middle of a circular ring of bricks identifying the location of the first tower.

In 1892, a large storm house, which covered the rear entrance to the dwelling and a cellar, was enlarged to serve as a summer kitchen. A circular oil house was also erected 128 feet south of the lighthouse that year and lined with brick to store the volatile kerosene that was introduced as fuel for the stations lamp.

The inner beacon on the west pier was rebuilt upon an improved model in 1895. The new tower was square in plan, painted white, and featured a balcony with a black handrail around its lantern room.

On June 10, 1901, the fourth-order Fresnel lens used in Sodus Bay Lighthouse since 1858 was removed and transferred to the outer pier tower, which had been elevated fifteen feet using concrete piers to give it a focal plane of forty-five feet. After thirty years of service, the 1871 lighthouse was discontinued, but the keeper, now responsible solely for the pier lights, continued to live there. The round oil house was relocated to a spot near the inner tower on the pier. In 1902, the period between flashes of the outer pierhead light was reduced from two minutes to thirty seconds. An air fog signal was established at the Sodus Outer Lighthouse on June 3, 1926 to mark the end of the piers in periods of limited visibility.

The present square pyramidal pierhead tower, which has a focal plane of fifty-one feet, was erected in 1938, after the old wooden tower was removed. At that time, the source of the light was converted from kerosene to electricity, and electricity was also used to operate an improved fog signal. The light and fog signal were both controlled from a brick control house built at the inner end of the west pier. A new inner tower, consisting of a skeletal tower with an enclosed base, was also erected in 1938. A marker radiobeacon was installed on the pier in 1948.

While lumber and grain had early been important commodities for Sodus Bay, coal later became the primary cargo shipped from the port. In 1940, more than one million tons of coal were shipped from Sodus Point Harbor. The coal industry thrived until the late 1960s when many power generation plants were converted to oil.

Daniel Phillips, a Civil War veteran who fought at Gettysburg, was appointed keeper of Sodus Bay Lighthouse in 1881 and was in charge of the station for thirty-six years, by far longer than any other keeper. It was during his term that the main light was discontinued, and the outer light on the pier became the primary guide to the bay.

The position of assistant keeper was added to the station in 1871, the year the new lighthouse on the hill was built. Charles Plummer served as assistant keeper for over twenty years, and in 1935 he was recognized for rescuing a boy and girl from drowning when their canoe overturned near the lighthouse.

Edwin Ward, the final keeper to live in Sodus Bay Lighthouse, was born into a lighthouse family. George Ward, his father, served as head keeper at Crossover Island Lighthouse and Horse Island Lighthouse, and his grandfather was also a keeper. Edwin worked as an assistant keeper at Tibbetts Point for many years before being placed in charge of Sodus Outer Light in 1939. Frank Ward, Edwins brother, was head keeper at Rock Island Lighthouse for roughly the same period Edwin was at Sodus Bay. Edwin Ward retired in 1952, but the Coast Guard continued to house personnel at the lighthouse through 1980. When Sodus Bay Lighthouse was placed on the National Register of Historic Places in 1976, the local Coast Guard commander was residing in the lighthouse.

The museum was dedicated on July 4, 1985, and among those present was Linnie Ward, wife of Keeper Edwin Ward, and her daughter Mary Lou, who shared some of her childhood memories at the lighthouse: Downstairs there was the dining room, kitchen, and dads study. In order to get to our bedrooms upstairs, we had to walk up the spiral stairs that went to the top of the lighthouse. I remember in the winter it was cold walking up them stairs. Thanks to the oversight of the historical society, Sodus Bay Lighthouse remains a place where many more memories will be made.

For a larger map of Sodus Outer Lighthouse, click the lighthouse in the above map.

This light can be seen from Sodus Point Lighthouse, or from the lighthouse, you can take Ontario Street south to Wickham Boulevard, turn left on Wickham, and follow it to the parking area at its end from where you can walk the pier to the light.

The lighthouse is owned by the Coast Guard. Pier open, tower closed.