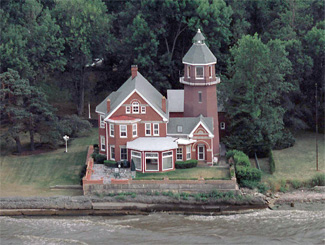 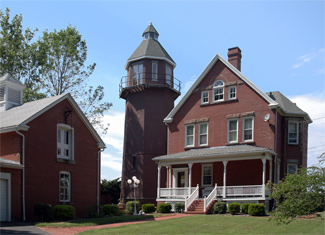 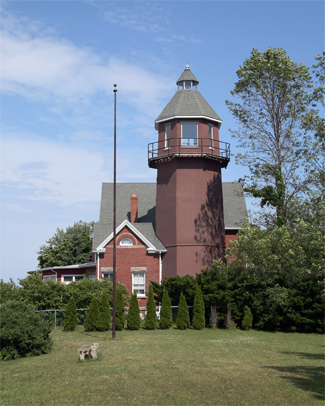 While there are several small lights between Thirty-Mile Point light and Oswego light, there is no light of any importance in this stretch of about 100 miles which can be used by vessels going up or down the lake as a coast light. For some time efforts have been made by navigators to accomplish the establishment of an additional light of such height and brilliancy that it can be used as a point of departure. It is therefore recommended that a third-order light-station be established between Genesee and Oak Orchard light-stations somewhere in the vicinity of Braddocks Point, at an estimated cost of $20,000.

The above recommendation for the establishment of a significant light along the southern shore of Lake Ontario was originally made by the Lighthouse Board in 1889 and repeated again in 1890 before Congress approved an act on March 3, 1891 appropriating the necessary $20,000. The Attorney General of the United States approved the purchase of five-and-a-half acres of land on Bogus Point, just west of Braddock Bay, from James Worboys for $500, and the land was then ceded to the federal government by the State of New York in May 1892.

Lieutenant Colonel Jared A. Smith used the Cleveland Lighthouse, built in 1872 and considered by many to be one of the most beautiful lighthouses in the United States, as the basis for his plans for Braddock Point Lighthouse. Perhaps this was because Cleveland Lighthouse, rendered unnecessary by harbor lights, had been deactivated at the close of navigation in 1892 and was scheduled to be torn down in 1895, making the towers lens, lantern room, and decorative metalwork available for use elsewhere. Both of these towers and dwellings were built in the Victorian era and definitely showed signs of the then popular architectural style.

A contract with A.J. Serius & Son of Youngstown, New York for construction of the keepers dwelling, tower, and a woodshed for Braddock Point was approved on June 25, 1895 and called for the buildings to be completed within nine months. When finished, the octagonal, ninety-seven-foot tower was nearly identical to the one at Cleveland, while the residence, though similar in style, was significantly different. According to the records of the Lighthouse Board, the lantern, iron stairway, iron window frames and sash, finished stone of the upper part of the tower, and the lens were removed from Cleveland Lighthouse and transferred to Braddock Point. A two-and-a-half-story redbrick dwelling, decorated with stone trimmings, was attached to the Braddock Points redbrick tower and had a hall and six rooms on the first floor and three bedrooms and a bath on the second floor. The light from the towers third-and-a-half-order Fresnel lens was exhibited for the first time on August 17, 1896.

Around the same time as the inaugural lighting, a brick barn was completed, a 5 5/8-inch well was drilled to a depth of 105 feet (93 feet through solid rock), and a square, iron oil house was erected at the station. In 1899, the towers Fresnel lens, which was visible over an arc of 180°, was removed and replaced with a 270° Henry-Lepaute Fresnel lens of the same size that could be seen from all points of approach from the lake.

The Annual Report of the Light House Board for 1902 had the following entry for Braddock Point: To stop leaks in the tower it became necessary to remove and replace the entire lantern, lantern deck, parapet gallery deck and rails, and all connecting ironwork. All the ironwork was cleaned and repainted, and all joints were bedded in cement made of red and white lead. The 3 ½ order lens light was discontinued while the tower was being repaired, from May 8 to June 30, 1902, during which time a lens-lantern light was exhibited from the northern face of top of the tower.

A new oil house was built at the station in 1913, and on June 16, 1915, the intensity of the light was increased by changing the illuminant from oil to incandescent oil vapor. In 1925, the lights intensity was increased further through the installation of electricity, and the characteristic of the light was changed at this time from fixed white to a group of two flashes every six seconds through the use of an ordinary sign flasher.

Face brick on the tower was replaced in 1916. This might have been due to poor quality brick or a result of the leaks the tower suffered. Either way, the tower had structural issues, as by 1951, scores of cracks and fissures, some as long as fifty feet, snaked up the sides of the lighthouse. Shortly after the Coast Guard deactivated Braddock Point Lighthouse on January 1, 1954 and replaced it by a fifty-foot skeletal steel tower, the upper half of the tower had to be removed due to extensive structural damage. Once again, the United States had lost one of its most ornate lighthouse towers.

Braddock Point Lighthouse had just four keepers during the fifty-four years it was staffed. Frank Coleman was in charge of the light from 1896 to 1929, when Michael Fitzpatrick transferred in from Fair Haven with his wife and seven children. In May 1899, Keeper Coleman was cleaning windows in the lighthouse when he fell and sustained a compound fracture of both bones of the right leg. One bone was driven through the flesh three inches. A newspaper article estimated that before the light was electrified in 1926, Keeper Coleman had walked roughly 700 miles during his twice-daily trips up and down the tower.

After retiring, Frank Coleman reminisced about his time at the lighthouse: My first inspector was Captain Gridley of the navy. He was a real man for you. Do you remember himthe fellow who fired the first shot at Manila when Admiral Dewey said. You may fire when youre ready, Gridley? Yes, sir, that was my first boss and a man never had a finer one.

Kepper Michael Fitzpatrick retired in 1935, after six years at Braddock Point, and was replaced by Claude Jacox, who ran a jewelry business out of the lighthouse. During the early 1940s, ads like the following appeared regularly in local newspapers:

FOR SALENew wrist watches, all the leading makes; trade in your old watch. Call on me for anything to do with watches, new cases or repairing. Claude Jacox, right in the Braddock Point Lighthouse, Hilton, N.Y.

After retiring in 1947, Jacox opened a jewelry store in nearby Hilton, but passed away in 1949 at the age of just sixty-three. The light was automated at the end of Jacoxs tenure, but coastguardsman Robert Millar moved his wife and five children into the lighthouse to look after the property.

After Millar left the station in August 1950 for another assignment in Michigan, duck hunters and other trespassers mistreated the vacant dwelling. Windows were knocked out, exposing the interior to the weather, and soon the structure was knee-deep in plaster and broken glass.

The dwelling, thirty-foot tower, 4.7 acres of land, 1,200 feet of lakefront, and the carriage house were sold to Walter and Kay Stone for $14,500 in April 1957. Ill never forget my first sight of this place, Kay Stone recalled. There it sat on that long, lonely, desolate stretch of beachland  a huge, hulking brick structure with all the windows boarded up. Brush and weeds had overgrown the land leading up to it so that it was barely possible to approach the place. It had been unoccupied, neglected, and weatherbeaten for years, but it withstood it all, and still stood there proud and strong.

The Stones thought they would just fix up the place so they could use it as a summer home, but its exceptional architecture and beauty, a curious mixture of government and Victorian, drew them into a full-scale restoration. Kay Stone shared some of the unique features of the dwelling with a reporter: Everything is so massive. The walls of the house are solid brick about 18 inches thick. The government cut no corners on construction. The doors and trim are gumwood and were in excellent shape. Two of the fireplaces in the dining room and living room are unique. Originally built to burn either coal or wood, they have a sliding metal plate over them that radiates heat.

In February 1986, Robert and Barbara Thulin purchased the lighthouse property and, after two years of planning, initiated what turned into an eight-year renovation. Structural walls, pocket doors, wainscoting, and moldings were all replaced to return the lighthouse to its former grandeur. In 1995, the tower was rebuilt to a height of sixty-five feet, and after receiving the Coast Guards approval the lighthouse was relit on February 28, 1996.

In 2006, the 3,000-square-foot, furnished home along with the tower, an 1,800-square-foot carriage house, and a six-car garage were placed on the market for $1.9 million, but a few months later, the selling price was reduced to $1.5 million. The desirable property, which had potential as a residence, summer home, or even a bed and breakfast, was eventually purchased by Donald and Nandy Town in December 2008. The new owners, who grew up in upstate New York and spent their summers on Lake Ontario, operated a bed and breakfast in Florida and opened the keepers dwelling as Braddock Point Bed & Breakfast in 2010. As Don ran across the listing for the property on June 14, 2008, the couples wedding anniversary, he feels they were destined to be the owners of the lighthouse.

Located on the shore of Lake Ontario roughly 10 miles west of the Charlotte-Genesee Lighthouse. The address is 18 Clearview Avenue, Hilton, NY.
Latitude: 43.3408, Longitude: -77.762

For a larger map of Braddock Point Lighthouse, click the lighthouse in the above map.

From the Lake Ontario State Parkway west of Rochester, turn north on Lighthouse Road and then right on Clearview Avenue. Braddock Point Lighthouse will be on your left. Just before you reach the lighthouse, you will see a sign on a telephone pole that marks Bogus Point Park. The sign reads: "This public park is a Federal Lands-to-Parks project with land acquired through the National Park Service, Department of the Interior." From what we gathered, the park is basically a right-of-way to a small grassy area, just west of the lighthouse, that offers decent pictures of the lighthouse. From 2010 to 2020, the keepers dwelling operated as Braddock Point Bed & Breakfast.


When built, Braddock Point Lighthouse was 125 feet away from the high water mark, but as you can see from the aerial picture on this page, most of that buffer is now gone. By comparing the historic and modern pictures, you can see that the land around the lighthouse has been greatly built up to protect the property.