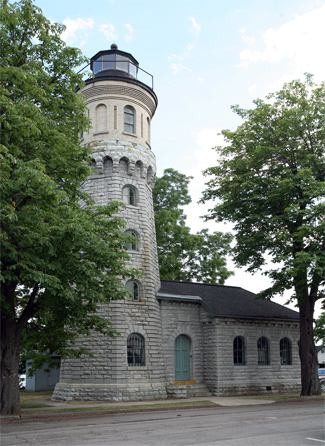 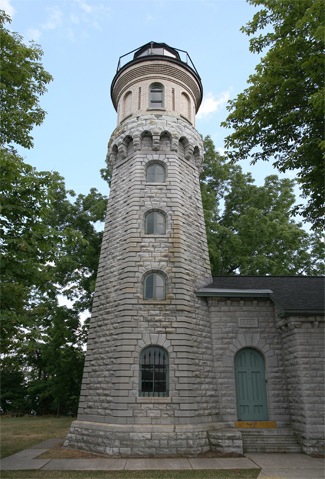 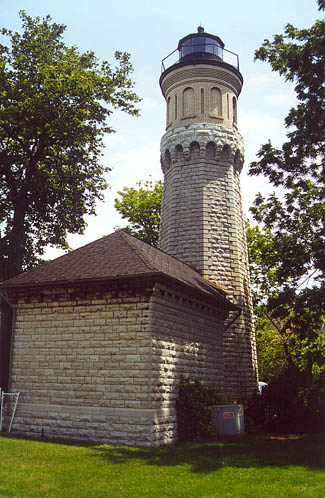 Several lighthouses have marked the point where the Niagara River joins Lake Ontario near Youngstown, New York. This area attained importance in the late 1600s when French fur traders used the Great Lakes to transport their goods. Niagara Falls separated the supply of furs to the west with the demand that lay to the east, forcing the traders to use bateau (flat-bottomed, shallow-draft boats) and canoes to portage furs around the falls. The mouth of the Niagara River became an ideal point for transferring the furs to larger ships, and since that time, it has served as an essential harbor as well as a point of strategic importance during multiple wars.

Two predecessors to the current Fort Niagara were built by the French  Fort Conti in 1679 and Fort Denonville in 1687. In 1726, the still-standing French Castle was built. At this time, the fort and vapor of Niagara Falls served as useful navigational markers during the day, but at night mariners lacked any sort of guide.

In 1759, the British captured Fort Niagara after a nineteen-day siege that was part of the French and Indian War. Due to the increase in vessels on the Great Lakes after this conflict, the British placed a beacon on the roof of the fort in 1781. This was the first navigational light on the Great Lakes, and like most of its contemporaries, it was probably illuminated with whale oil. The lights primary purpose was to keep vessels from drifting too far west of the fort at night.

Fort Niagara was relinquished to the United States in 1796 after the Revolutionary War, and the roof light remained active until 1803. The British garrison across the river at Fort George constructed Mississauga Point Lighthouse, also known as Newark Light, in 1804, the second lighthouse to serve the area. This lighthouse survived the War of 1812, but in 1814, it was demolished to clear a site for the construction of Fort Mississauga. The next light to mark the mouth of the river was established in 1823, after Congress provided $1,000 on May 7, 1822 for placing a lamp on the mess-house at Fort Niagara and $1,500 on March 3, 1823 for completing a tower for the light on Fort Niagara. Vessel traffic in the area declined after the opening of the Erie Canal in 1825 reducing the need for the difficult Niagara portage.

Fort Niagara and its lighthouse were involved in the William Morgan affair, an 1820s political scandal. Morgan, a renegade Freemason who threatened to go public with obscure Masonic rituals, was kidnapped and held at Fort Niagara shortly before his disappearance in 1826. Edward Giddings, keeper of the lighthouse at the time, was suspected of having been involved in the detainment of Morgan at the fort, but Giddings was never arrested. The incident caused a national sensation over dark Masonic conspiracies, leading to the creation of a short-lived anti-Masonic political party.

In 1829, the Canadians opened the privately-financed Welland Canal, which provided a navigable link between Lake Ontario and Lake Erie and eliminated the need to haul vessels overland. Despite this improvement, enough sailing and steam vessels remained on the Niagara River to justify a light at the rivers mouth.

The following report on Fort Niagara Lighthouse was made in 1838 by Naval Lieutenant Charles T. Platt: This light is situated on the mess-house, within Fort Niagara, at an elevation of 70 feet above the water. It is a good light-house, situated at a point convenient for the mariner, and the excellent order in which it is conducted gives high credit to the keeper. It is lighted with 9 lamps and an equal number of reflectors, fixed.

In 1855, the keepers dwelling and other outbuildings at Fort Niagara were damaged by a tornado, and in 1857 the tower was outfitted with a fourth-order Fresnel lens and new lantern room which had just nine panes of glass instead of the 150 used by its antiquated predecessor. The Lighthouse Board requested a new lighthouse for the fort in 1868 as the current wooden tower was so old and out of repair that it let in the snow and rain in stormy weather. Four chimneys surrounded the octagonal tower, and the previous winter a spark from a chimney caused a dangerous roof fire, which could have easily destroyed the towers valuable lens. Moreover, the tower was poorly situated, as it required using the stairway and passages of the officers quarters as a thoroughfare for the supply of the light.

While waiting for funds for a new lighthouse, the keepers dwelling was reshingled and equipped with shutters and rain gutters, and a woodshed, privy, and a barn were built for the keeper.

After Congress provided $16,000 on March 3, 1871 for a new lighthouse, plans for a fifty-foot octagonal limestone tower with an attached oil room were drawn up. Work on the structure, which was placed outside the forts walls near the stone keepers dwelling, commenced in July 1871, but masonry work had to be suspended on November 30 due to the early arrival of cold weather. Work resumed on April 15 of the following year, and the light from the fourth-order Fresnel lens, transferred from the old tower, was first exhibited on June 10, 1872. The lights focal plane was raised eleven feet, four inches in 1900, when a brick watch room was added between the top of the stone tower and the lantern room.

The militarys water main at the fort was tapped in 1889 to provide water for the light station. Also that year, the roof of the stations barn was re-shingled and a wagon shed measuring twelve by sixteen feet was constructed for the convenience of the keeper. In 1894, the Lighthouse Board noted that the keepers dwelling was old, in bad condition, and unsuitable and requested $4,000 to build a new one. Under a contract of June 25, 1896, a six-room, two-story keepers dwelling was built 140 feet west of the lighthouse, following plans that had been used for dwellings at Dunkirk and Oswego. At the same time, the grade of the lot around the dwelling was raised, and a gravel driveway leading from the lighthouse reservation to a nearby street was made.

In 1899, the Lighthouse Board requested $2,000 to place a light atop a twenty-five-foot tower closer to Lake Ontario to help vessels safely reach the protected anchorage offered by the river. At the time, no port for deep-draft vessels existed along Lake Ontarios south shore between the Genesee River and Port Dalhousie, a distance of nearly ninety miles. This request was repeated annually for six years, but appears to have gone unfulfilled. In 1905, a square iron oil house with a capacity of 540 gallons was erected twenty-five feet south of the lighthouse, and the former oil room was converted into an office and storeroom.

On August 28, 1919, Fort Niagara Lighthouse was electrified allowing for its characteristic to be easily changed from fixed white to four seconds of light followed by a two-second eclipse.

George F. Ferguson was serving as keeper of the lighthouse in 1929, when he traveled to the Cleveland Clinic for a throat operation. On May 15, Ferguson was walking down a hall after having just undergone a final examination prior to his discharge when a massive explosion knocked him to the floor. The explosion and resulting fire, which killed 123 people, was caused when nitrocellulose x-ray film was ignited by an exposed light bulb. The burning film produced poisonous gases that caused many patients in the clinic to suffocate. When Keeper Ferguson returned to Buffalo, he declined to be interviewed saying, My nerves are wrecked, I cant talk about it. Keeper Ferguson also served as secretary of the Old Fort Niagara Association, and while tearing down some plaster at the fort, he discovered a piece in which the names of four Frenchmen and the years 1741 and 1742 were scratched.

During the prohibition era, Keeper Ferguson was captaining a captured speedboat with 400 gallons of alcohol aboard to the Coast Guard station at Fort Niagara in June 1926, when the vessel caught fire. Ferguson and a deputy sheriff, the only other person aboard, quickly leaped into the vessels small dory that was in tow and watched as the speedboat exploded and burned to its waterline. Two Canadians and two Americans were loading the speedboat with alcohol when it was seized by authorities. Keeper Ferguson received a citation from the federal government for his part in the rescue on February 3, 1917 of a young man whose boat was caught in an ice jam at the mouth of Niagara River.

An article in The Niagara Falls Gazette in 1939 invited the public to visit Fort Niagara Lighthouse during the week starring Monday, August 7 to celebrate the 150th anniversary of the establishment of the United States Lighthouse Service. E. Wallingford Moon, the keeper of the lighthouse at the time, opened the tower to visitors so they could get the finest view obtainable of Fort Niagara, the Old Fort, river, and lake. Keeper Wallingford would show visitors the power plant on the ground floor and then escort them up the towers spiral stairway and explain the light and identify points of interest from the balcony surrounding the lantern room. An old-timer in Youngstown remembered that the limestone used to construct the lighthouse was brought across the lake in scows from Ontario and that the rock smelled like skunk.

Rather than remove or trim roughly fifty trees that were starting to obscure Fort Niagara Lighthouse, the Coast Guard decommissioned the historic sentinel in 1993 and replaced it with a light on a nearby radio tower. Nancy Price, who had lived in the keepers dwelling while her husband, Richard, was officer in charge of the Fort Niagara Coast Guard Station from 1968 to 1975, was given the honor of throwing the switch to activate the modern light. Minutes later, her grandson was permitted to pull the plug in the lantern room of the historic lighthouse to darken the Fresnel lens.

The historic lighthouse is currently leased to the Old Fort Niagara Association, which at times has kept a small museum and gift shop in the tower. The Fresnel lens was removed from the tower in 1995 and is on display at the visitors center at Old Fort Niagara. The association holds a number of interesting historical events at the fort each year covering the French and Indian War, Revolutionary War, and the War of 1812. Open year round, Old Fort Niagara boasts both an extensive collection of eighteenth century military architecture as well as splendid examples of military engineering. In 2013, the windows in Fort Niagara Lighthouse were replaced using a $10,000 donation from the East Hill Foundation of Western New York.

Located in Old Fort Niagara State Historic Site on the eastern side of the entrance to the Niagara River from Lake Ontario.
Latitude: 43.26176, Longitude: -79.06056

For a larger map of Fort Niagara Lighthouse, click the lighthouse in the above map.

From the Robert Moses Parkway roughly fourteen miles north of Niagara Falls, follow the signs to the entrance of Fort Niagara State Park. Fort Niagara Lighthouse is located in the westernmost part of the park near the French fort. The lighthouse is typically open on weekends from mid-July through August. The Fort entry building houses a Fresnel lens and lighthouse models.

The lighthouse is owned by the Coast Guard and managed by the Old Fort Niagara Association. Grounds open, tower closed.