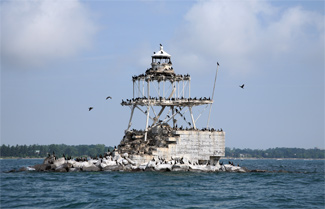 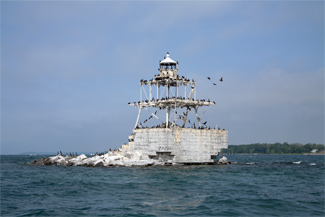 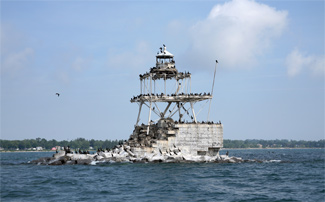 Buffalo already possessed a working and satisfactory lighthouse when Horseshoe Reef Lighthouse was being contemplated, but expansive growth in industries such as lumber and grain milling necessitated that the treacherous entrance to Niagara River be marked with its own light. The river led to docks and industrial centers in the nearby neighborhood of Black Rock, but navigating to them proved troublesome as the waterway was littered with shoals and reefs. The story of this lighthouse begins in 1849, when Congress allocated either $10,000 for a lightship or $20,000 for a lighthouse, if it were decided that a permanent structure was the superior choice for the location. U.S. Navy Commander Abraham Bigelow visited the site, recommended a lighthouse be used, and estimated that $45,000 would be needed to build a sturdy offshore structure. Of particular concern at the exposed location were ice floes and the current that quickens as the Niagara River approaches the narrows, now spanned by the Peace Bridge.

Stephen Pleasonton, Fifth Auditor of the Treasury Department and longtime steward of American lights, determined that the site selected for the lighthouse was on the Canadian side of the international border, which had been established since the days of the American Revolution, and had been once again cemented seven years after the conclusion of the War of 1812. The proposed lighthouse would stand just a short distance away from the site of the Battle of Fort Erie, in which over a thousand Canadian, American, and British soldiers perished.

At the time, there was certainly no guarantee that the British would welcome or permit an American lighthouse on their side of the border. Twenty years earlier, the British had rejected a similar request for a beacon in the Bahamas, but Pleasonton decided to ask for permission anyway. To his surprise, the English were far more receptive this time around. Swiftly blossoming commerce transcended nationalistic concerns, and the British realized that they could derive benefit from a Niagara lighthouse while allowing the Americans to incur the expense of building and maintaining it. Still, there was a long chain of diplomatic contacts to work through to make the project a reality. In London, the U.S. Minister contacted the British Foreign Secretary Viscount Palmerston with the idea. Palmerston communicated with the Colonial Secretary Earl Grey, who in turn contacted Governor General Lord Elgin, requesting that the provincial government in Ontario consider the matter.

It greatly helped that the American request included a petition with the signatures of several hundred merchants and residents of Buffalo, and that Canadian businesses also supported the project. On April 23, 1850, Canadas provincial government gave its approval. Many high-ranking British officials still had to sign off on the deal, so it wasnt until December that the U.S. Minister and British Foreign Secretary signed a Protocol in London. Indeed, even then U.S. President Millard Fillmore, a Buffalo native, had to agree to the terms, which he did in 1851. The Protocol involved a British cessation of an acre of submarine land located 1,150 feet on the Canadian side of the border. Though the lighthouse would be called Horseshoe Reef Lighthouse, it was actually built on Middle Reef. As part of the agreement, the U.S. pledged to follow through with the erection of a lighthouse on the reef and to never build any type of fortification there.

On March 3, 1851, Congress appropriated $45,000 to build Horseshoe Reef Lighthouse. Shortly thereafter, the Lighthouse Board assumed control of U.S. beacons from the Treasury Department and appointed a committee to review a proposal by Mr. Isaac Smith for construction of the lighthouse. Against the committees advice, the Board selected the proposal that called for a six-foot diameter foundation hole to be excavated twelve feet into the reef, which itself was six feet below the surface of the lake. A hollow, iron cylinder, forty-seven feet in length, would then be set in the hole and filled with melted zinc. A cast-iron hub, with six radiating spokes, would then be fitted atop the cylinder to serve as the frame for the lighthouse.

Bad weather and the unstable composition of the reef doomed the project, and the contract with Smith was canceled, though he was paid $17,744 for work and materials. Diplomatically obliged to build the lighthouse or forfeit the reef, the U.S. Government undertook to carry out the project in 1855 and 1856. A forty-foot-square, oak crib with a limestone pier built inside it was put in place on the underwater reef, and four iron columns were anchored in the pier to support a single-story, wooden dwelling topped by an iron lantern room. Standing at a height of fifty feet above the river, the lantern room sported a fourth-order Fresnel lens, the light from which was first exhibited on September 1, 1856 and could be seen from up to ten miles out in the lake.

The station was regarded as a particularly unpleasant assignment among lighthouse keepers. Two keepers alternated duty at Horseshoe Reef, living on the mainland and commuting to work via rowboat, except when bad weather and rough seas compelled them to make do in the spartan quarters on site. A turn of the century keeper received $560 a year in pay and his assistant $490, which wasnt much considering no dwelling was provided for them onshore and that the Lighthouse Board admitted that Horseshoe Reef was one of the most comfortless and unattractive stations in the district. To improve matters, the Lighthouse Board recommended in 1902 that a double dwelling should be built near Buffalo Main Lighthouse for the keepers of Horseshoe Reef. This recommendation was repeated for four years until $6,200 was appropriated in 1906. The dwelling was completed in 1907.

A 1913 arrangement moved the Canadian border to a point 100 feet west of the lighthouse, placing Horseshoe Reef Lighthouse within U.S. territory. By this time, however, the beacon on Middle Reef was quickly losing its significance. A protected waterway had been formed along the eastern shore of the Niagara River, offering a direct route to Black Rock absent the swift currents and treacherous shoals of the river proper. The lighthouse was further made obsolete when a water intake crib was established in nearby Emerald Channel in 1907 and outfitted with a navigational beacon the following year. The keepers at Horseshoe Reef also kept the water intake light. No longer needed, Horseshoe Reef was permanently discontinued on August 1, 1919 and left to decay.

The keeper with the most years of service at Horseshoe Reef Lighthouse was Thomas Joseph, who arrived as assistant keeper in the spring of 1902 and was promoted to head keeper the following year when Frederick Lawson was transferred to the Niagara River Range Lights. Keeper Joseph served at Horseshoe Reef for twelve years, leaving when the light was automated. Edward Herman served as assistant to Thomas Joseph from 1907 to 1913, when he was transferred to Marblehead Lighthouse in Ohio. Rebecca Lawrence-Weden, the grandniece of Edward Herman, has done extensive research on Keeper Herman and created a website, Lighthouse Discovery, which chronicles his life. The historic images on this page are courtesy Rebecca Lawrence-Weden.

The water intakes primary purpose is to provide clean water to the city of Buffalo from a spot where Lake Erie flows into the Niagara River. Water is brought in through grates and collected in a central pool. From there, gravity takes it down a twelve-foot diameter tunnel that extends for 6,600 feet beneath the bottom of the lake to the Colonel Ward Pumping Station, located on Porter Avenue in Buffalo, where it is purified and distributed. The intake gathers up to 125 million gallons of water every day.

Buffalos intake crib or roundhouse is a much larger structure than the Horseshoe Reef Light it replaced, so it was a simple matter to affix an automatic beacon atop its tiled roof. The light has a characteristic of two white flashes at five-second intervals.

While the intake crib is a healthy and active structure, Horseshoe Reef Lighthouse is a mere skeleton. The wooden superstructure has long since rotted away, and only the stone foundation, iron framework, and lantern room remain. The lighthouse has received a spot on a national watch list for threatened lighthouses, earning the lowest possible score of a y for its current dilapidated condition. A y score essentially means that a structure is in ruins, and that any future improvement would require reconstruction.

The structure has not gone entirely to waste, as a colony of cormorants have taken up residence on the stark beams. Previously endangered, the cormorants have returned to the Great Lakes area and have graced the Horseshoe Reef ruins for the last fifteen years. Cormorants need three things in a locale to declare it their home, and the Middle Reef structure qualifies on all counts. It is devoid of people, in proximity to shallow water that contains schools of small fish, and provides plenty of roosting space. Not everyone is thrilled about the presence of the birds. Sports fishermen are irked that each of the hundreds of cormorants daily consume up to a pound of small fish, depleting the feed for larger fish.

For a larger map of Horseshoe Reef Lighthouse, click the lighthouse in the above map.

The lighthouse is best seen from the water, but a distant view is possible from Buffalo Main Lighthouse. Northeast Outdoors offers charters in the area.

A fifth-order Fresnel lens believed to have been used in the Horseshoe Reef Lighthouse is on display at the Pan-Am Building of The Buffalo and Erie County Historical Society.