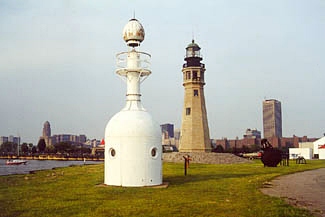 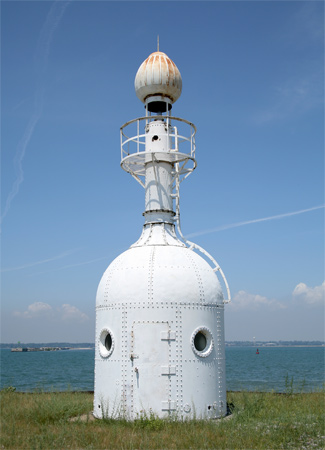 In 1902, a new breakwater was being finished just north of the entrance to the Buffalo River. As a temporary measure, the Lighthouse Board established a red post lantern on the southerly end of the breakwater to mark the northern side of the northern entrance to Buffalo Harbor while a permanent beacon was being designed and constructed. The permanent light, known as the bottle light due to its resemblance to an old glass milk bottle, was installed on the breakwater in 1903. The structure was made of 3/8" boiler plate and had a diameter of 10' 3/4" at its base. Four circular windows provided light for the interior, which was accessed by a curved iron door. The tower tapered to a diameter of 2' 8" and then extended upward to the lantern. A cable, pulley, and hoisting winch were used inside the base to raise a lens lantern to the top of the tower, while an exterior ladder allowed the keeper to climb up to the light. An egg-shaped ventilator ball, supported by four iron posts, topped off the tower and brought its total height to 23' 3/4".

In 1909, a Barbier, Benard & Turenne lens lantern was being used in the tower to produce a fixed red light, which was maintained by the keeper of Buffalo Main Lighthouse. A ruby chimney was used in the oil lamp to produce the red light.

In 1960, a battery-operated, twelve-volt lamp, covered by a green plastic lens, was installed atop the tower, and the ventilator ball was removed.

The bottle light served until 1985, when it was removed from the breakwater and given a new home next to the original 1833 Buffalo Main Lighthouse. Fully restored and capped with a reproduction of its ventilator ball, the bottle light is now part of the 1,400-foot promenade featuring detailed signage documenting Buffalos historic waterfront.

Located next to Buffalo Main Lighthouse at the Coast Guard Station on the south side of the entrance to the Buffalo River.
Latitude: 42.87765, Longitude: -78.89007

For a larger map of Buffalo North Breakwater South Side Lighthouse, click the lighthouse in the above map.

After 9/11, security at the Coast Guard station was increased, and public access was only permitted by escort. A deal was worked out in 2010 for the Coast Guard to relinquish its land around the lighthouse, and the area was again opened to the public in late 2011.

After 9/11, security at the Coast Guard station was increased, and public access was only permitted by escort. A deal was worked out in 2010 for the Coast Guard to relinquish land around the lighthouse, and access was restored in late 2011.