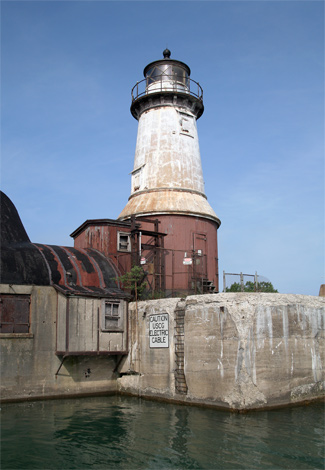 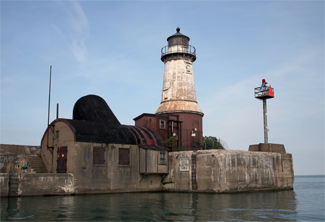 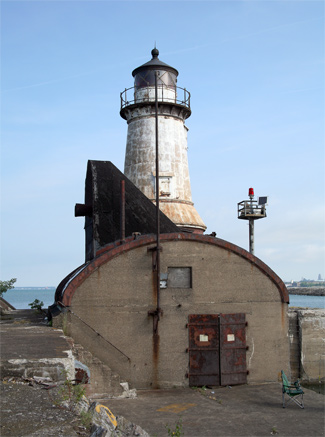 Buffalos emergence as a bustling port continued well after the 1825 opening of the Erie Canal. The city quickly outgrew its first lighthouse erected in 1818, and the 1833 stone tower still standing today was superseded by a breakwater station in the 1870s. Still, the volume of ship traffic necessitated another expansion of the harbor, and a lengthy breakwater was built south of the main harbor. The 1900 Annual Report of the Light House Board noted: By the act approved June 6, 1900, $45,000 was appropriated for establishing suitable light and fog signal stations to mark the main southern entrance of the new breakwater at Buffalo, N.Y. Plans for the light towers and fog-signal house, including foundation and pile protection work were completed, and plans for the keepers dwelling are being prepared. Soon after the plans were finished, a section of the breakwater near where the light towers were to be erected was badly damaged by two severe storms, forcing the plans to be modified to provide greater strength to meet extreme conditions of wind and wave action. It was ultimately determined to place both a fog signal and beacon light on the south side of the southern harbor entrance, and an accompanying, smaller light on the north side. A contract for the project was signed with a target completion date of December 31, 1902, and soon work had begun on concrete foundations at the sites. However, owing to difficulties in acquiring iron for the construction of the south side beacon and fog signal house, the contractors were unable to finish their work by the end of 1902, and the incomplete lighthouse was sealed up and securely anchored for the long winter ahead. Work resumed in the spring as soon as the ice permitted, but defective building materials and shoddy craftsmanship further impeded the projects completion until later in 1903.

The Annual Report of the Lighthouse Board noted that at the end of June 1903 the south side lighthouse and the steel beacon on the north side were both essentially finished. The metal trusses for the roof of the fog signal building had been delivered to Buffalo, but no work was performed on the building itself as the timber supplied for its walls did not pass inspection. Important parts for the station were in various states of transit at the time. The pedestal, clockwork, and lens for the south tower were being stored at the general lighthouse depot, awaiting shipment, while the north beacons lens lantern had already been delivered to the lighthouse lamp shop in Buffalo. The fog signals engines, siren, and air receivers were in readiness at the Buffalo depot. The Lighthouse Board report also mentioned that title to real estate for the double keepers dwelling had been obtained and that a contract had been let for its completion by October 2, 1903.

Both the North and South Side Lighthouses were exhibited for the first time on September 1, 1903. Construction on the fog signal building was initiated on May 10, 1904. By July, the four walls of the signal house were standing, and the structural ironwork was in place awaiting installation of the roof covering. Finally, on November 12, 1904, a fog siren powered by compressed air produced by twin thirteen-horsepower engines was in readiness. A 176-foot pile and timber bulkheadon the easterly side of the Stony Point arm of the breakwater was also completed during the 1904 season.

A brick duplex for the keepers was built by Frank Petit for $8,764 on a parcel acquired from the Lackawanna Steel Company.

The new south entrance beacons were especially important to turn of the century Buffalo, as the city became the worlds leading lumber port and grain milling and storage center. The southern entrance was also located near the recently completed Lackawanna Steel plant, which became the worlds largest steel mill during the frantic production accompanying World War II. Bethlehem Steel acquired the plant in 1992.

The Buffalo South Entrance South Side Lighthouse is a unique tower with a brown cylindrical base, a white, conical midsection, and a black lantern graced with glass panes in a diamond configuration. The towers interior is furnished with fine wood wainscoting, and its lantern was originally equipped with a fourth-order Fresnel lens that produced the repeated sequence of two white flashes and a red flash, each spaced by ten seconds. The arch-roofed fog signal house adjoining the tower was painted brown. An air diaphone, which produced a two-tone air blast of three seconds, followed by a silent period of twenty-seven seconds, replaced the stations original fog siren in 1934, when the station was connected to commercial power via a submarine cable. The curvaceous Buffalo South Entrance North Side Lighthouse was known as the bottle light due to its close resemblance to an old glass milk bottle.

On May 10, 1912 a flashing red acetylene light, known as the South Buffalo Pierhead Light, was established at the outer end of the recently completed extension arm of the Stony Point breakwater. This new light was exhibited at a height of forty-three feet above the water from a white square pyramidal skeleton steel tower.

A radiobeacon, established adjacent to the South Side Light on April 4, 1939, transmitted a dash followed by three dots, Morse Code for B.

Automated in 1962, the Buffalo South Side Lighthouse is currently inactive, having been replaced by a simple, modern post light that is very convenient to maintain. The old beacons fourth-order Fresnel lens was removed in 1967, and after having been on display at the Coast Guards Buffalo Station, it was mounted in Buffalos cherished and more centrally located 1833 tower in 1987. This fourth-order bivalve lens was weakly lit at night up until 2013, when it was removed, restored, and then placed on display at the Heritage Discover Center, where the central office of the Buffalo Lighthouse Association is located. A 300-millimeter optic was mounted on the gallery outside Buffalo South Side Lighthouses lantern room upon the removal of the Fresnel lens. This optic was active until 1993, when the current navigational was established on a nearby pole.

The North Side Light was decommissioned in 1988 and relocated to the grounds of Dunkirk Lighthouse on Lake Erie. This bottle light has a twin that stood on a small breakwater opposite the North Breakwater Light and was later removed to the grounds of Buffalos historic 1833 tower.

The closure of most of the Lackawanna steel plant has had a large economic impact on the Buffalo area and greatly decreased the amount of freighters calling at the port. A large portion of Buffalos grain-milling and storage facilities have also shut down, but there was still an active General Mills plant in the harbor as of 2007. (During our boat ride through Buffalo Harbor, we were treated to the aroma of Cocoa Puffs.) Today, Buffalo Harbor is kept busy with fishermen and recreational boaters, and the city is planning on further development on the waterfront near the present Coast Guard station.

In July 2008, the Buffalo Harbor South Entrance Lighthouse was offered to qualified groups through the National Historic Lighthouse Preservation Act, passed in 2000. Two groups, the Buffalo Lighthouse Association and the Maritime Activity Interyouth Network, submitted a letter of interest by the September 23, 2008 deadline and followed up with a formal application. In 2011, the deed to the lighthouse was transferred to the Buffalo Lighthouse Association, who estimated $850,000 was needed to restore the lighthouse. Fundraising for the first phase of the project, a $185,000 stabilization and safety phase, began in 2012. By 2020, roughly $380,000 had been spent on the lighthouse, and it received its first new coat of paint in many years.

For a larger map of Buffalo South Entrance South Side Lighthouse, click the lighthouse in the above map.

From Highway 5 south of Buffalo, take the Tifft Street Exit and go west toward the lake. Turn right onto Fuhrmann Boulevard, and then as soon as possible turn left to reach a boat launch from where the lighthouse is visible. The lighthouse is inaccessible by land due to the surrounding industrial properties.