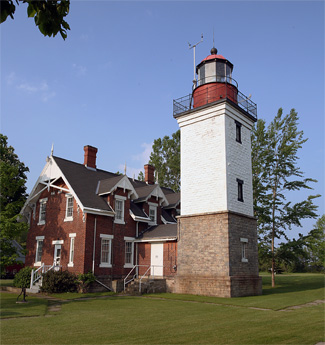 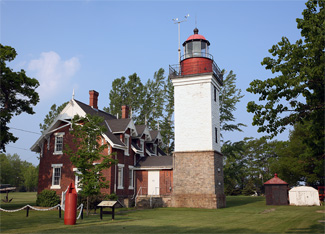 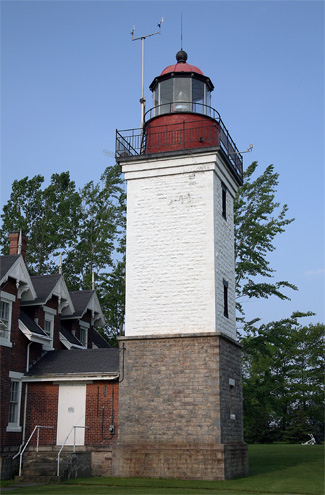 In the 1820s, Dunkirk nearly received the honor of serving as the western terminus of the Erie Canal, but Buffalo was selected instead. Still, with its natural harbor and its position at the western terminus of the Erie Railroad, Dunkirk was for a time an important port on Lake Erie. Situated on a twenty-foot bluff, the current square tower and attached dwelling is the second lighthouse to serve Dunkirk. Walter Smith, an influential citizen of Dunkirk, donated land on Point Gratiot for the original lighthouse, which was completed in 1826 with Jesse Peck having served as the contractor. Bricks, fashioned out of clay from a nearby lagoon, were furnished by Sampson Alton, and local blacksmith Adam Fink, whose shop was located at Central Avenue and Third Street, contributed the lantern.

Walter Smith entered into a ten-year deal with the Federal Government to provide a keeper and supplies for the station and attempted to light the beacon with natural gas. While this worked for a time at nearby Barcelona Lighthouse, there were very few lighthouses that ever successfully employed natural gas. The problem at Dunkirk was that the source of the fuel, located two miles away at Fredonia, was 150 feet higher in elevation, and the lighter-than-air gas would not descend more than halfway along the wooden pipeline made to transport the gas. By necessity, a lamp and reflector system fueled by whale oil was used instead at the lighthouse.

Walter Smith served as keeper for four years, until President Andrew Jackson cut short Smiths ten-year contract and appointed Abraham Day, his adopted son, as keeper in 1831. Abraham had served as a drummer in General Jacksons army during the Seminole Wars, and after that campaign, Jackson took the young boy home to the Hermitage and raised him with his step-son A.J. Donelson. Two years after Jackson became President, Abraham Day asked to be appointed a lighthouse keeper. President Jackson originally considered the lighthouses at Barcelona and Buffalo, but when Stephen Pleasonton informed him that popular veterans were serving there, the pair settled on Dunkirk.

In 1857, the lighthouse received a new lantern and a third-order Fresnel lens manufactured in Paris by Henry-Lepaute. While the main lens was fixed, there were three panels, mounted on chariot wheels, that revolved around the outside of the lens to produce a flash. The characteristic of the light was thus reported as F.V.W.F., meaning fixed varied with flash.

The 1868 Annual Report of the Light House Board noted that the Dunkirk station was in poor condition. The keepers dwelling leaks and the plastering is out of order. The roof leaks and the sills of the covered way which connects the dwelling with the tower are rotten. The main tower is cracked, and the fence enclosing a portion of the grounds is of indifferent quality. The beacon tower is decayed and leaks. This situation was soon rectified as the tower was repointed and whitewashed, and the keepers dwelling was refloored, reshingled, replastered, and painted. By 1874, however, the tower was in a very precarious condition, and it was reported that large sections of the outer shell may fall off at any moment, thereby endangering not only the whole tower, but also the dwelling and its tenants. An urgent request for $15,000 to rebuild the lighthouse was granted in March 1875, and in April a temporary tower was completed and outfitted with a sixth-order lens. The removal of the old tower was completed on June 2nd, and ground was broken for the replacement tower and new dwelling on June 16th.

The light from the new, square, limestone tower, containing a spiral, cast-iron staircase, was first exhibited on July 1, 1876. The tower still stands to this day and is sixty-one feet tall. The attached keepers dwelling is a beautiful, High Victorian Gothic specimen fashioned from red brick. The dwellings exterior is symmetrical with three large dormer windows, each with vintage wooden braces, adorning the north and south sides of the residence. The roofs gabled ends are decorated with boarding and brackets.

A number of noteworthy shipwrecks have taken place in the vicinity of Dunkirk over the years. One of the most tragic wrecks happened in 1841 when the Chicago bound Erie burned and claimed around 150 lives, most of them German and Swiss immigrants. The cause of the fire was determined to be careless painters, bound for Erie, Pennsylvania to paint the S.S. Madison, who left their combustible turpentine and varnish on the deck above the ships boiler room. The first container exploded at 8 p.m., and in no time the volatile liquid had spread the fire over most of the ship. The steamboat Dewitt Clinton saw the flames, rushed to the scene, and was able to pick up twenty-seven survivors.

The Dean Richmond, a wooden cargo ship, sank near Dunkirk in 1893. The ships cargo included $141,000 in precious metal bullion, $50,000 in pig zinc, and copper sheets stored unsecured on the vessels deck. Fighting a gale force wind, the captain turned the Dean Richmond to enter Dunkirk Harbor, but the copper sheets shifted, causing the vessel to capsize. Hundreds of bags of flour washed ashore from the wreck. Keeper Peter J. Dempsey and his family salvaged several sacks of flour, dried them out, removed a hardened outer crust, and enjoyed many loaves of bread and cakes.

The stations log reveals a several other interesting incidents in the lives of the keepers of Dunkirk Lighthouse. In 1873 the Yosemite drifted out of the channel and struck a shoal. The captain claimed that Dunkirk Lighthouse was not lit the morning of the accident, but keeper Benjamin F. Averill vehemently insisted that it was and had four witnesses who would testify in his defense. On May 1, 1885, Keeper Robert T. Taggart made the following entry in the logbook, I gave notice that I would Resign. Cause Drunkness [sic].

A number of pier lights marked the entrance to Dunkirks harbor, including this wooden tower that served from 1837 to 1880 and this iron tower that served from 1880 until it was swept off the pier on December 31, 1895. An elevated walkway with a length of roughly 900 feet allowed the keepers to access the beacon even in stormy weather. A temporary open-frame tower served on the pier from 1896 until 1899, when an enclosed wooden tower was built, and the open-frame tower was transferred to the north pier at Erie Harbor to serve as a fog-bell tower. Maintaining the pierhead light was the responsibility of the keepers of Dunkirk Lighthouse, which is why an assistant keeper was assigned to the station. Located on the grounds of the lighthouse is a skeletal tower that was installed at the harbor entrance in 1939 to replace the wooden tower. This tower served until the present harbor light was put in place in 1992.

In 1896, the light station was hooked up to Dunkirks waterworks with nearly a thousand feet of 2½-inch iron pipe, and in March of the following year a new dwelling was completed for the assistant keeper. Other turn of the century improvements included a forty-gallon hot water tank for the kitchen, galvanized iron fence on the east and north side of the lighthouse lot, and an iron oil house to hold the volatile kerosene used by the light. In 1901, the rotation speed of the flash panels was increased, changing the characteristic of the light from fixed white varied by a white flash every ninety seconds to fixed white varied by a white flash every forty-five seconds. The illuminant for the light was changed from kerosene to incandescent oil vapor in 1912, increasing the intensity of the flashes from 16,000 candles to 290,000 candles.

The towers light was electrified in 1923, while electricity arrived at the small beacon light in 1935. As keepers no longer needed to brave the walk to the harbor beacon, the position of assistant keeper was discontinued, and the assistant keepers dwelling was leased to local families. During World War II and for a short period afterward, Coast Guard personnel lived in the residence, but ultimately, the dwelling was demolished.

Around 1962, Dunkirk Lighthouse was unmanned as the prominence of Dunkirk harbor had begun to wane and technology had made automation of the light possible. General maintenance was still performed by the Coast Guard, but without a resident keeper, the dwelling started to deteriorate. A group of veterans and citizens signed a twenty-five-year lease on the property with the Coast Guard and turned the station into a memorial park and lighthouse museum. The keepers dwelling has been meticulously restored and features lighthouse memorabilia and photographs of keepers. Another building on the grounds houses military and maritime artifacts along with a souvenir shop, whose proceeds go towards continued maintenance of the station.

After a protective cement breakwall was destroyed by a violent storm, chunks of the bluff near the lighthouse were regularly lost to erosion. A round formation was eventually uncovered, and research proved it to be the foundation of the original lighthouse. Heritage Preservation and Interpretation, Inc., based in Steamburg, conducted an archaeological dig on the site in 2010 in an attempt to document and preserve the historic foundation.

For a larger map of Dunkirk Lighthouse, click the lighthouse in the above map.

From Interstate 90 south of Dunkirk, take Exit 59 and proceed to Highway 60 then go north on Highway 60 for 2.1 miles to Highway 5. Turn left onto Highway 5 and drive 1.1 miles to Point Drive. Turn right onto Point Drive and follow it 0.6 miles to the lighthouse which will be on your right. Dunkirk Lighthouse is open daily May through October. In July and August, hours are 10 a.m. to 4 p.m. In other months, hours are 10 a.m. to 2 p.m. Note that the last tour begins an hour or so before closing. Call (716) 366-5050 for more information and to confirm hours.

The lighthouse is owned by Dunkirk Lighthouse and Veterans Park Museum. Grounds/dwelling/tower open in season.


The grounds of Dunkirk Lighthouse are littered with maritime artifacts, including buoys, a fog bell, various ships, a bottle light from Buffalo, a light tower that served in the harbor at Dunkirk, a tower that was part of Grand Island Range, and the anchor from the Annabell Wilson, which sank offshore in 1913.