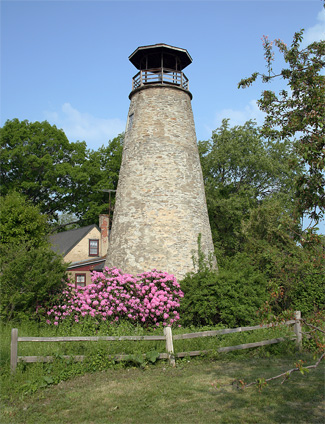 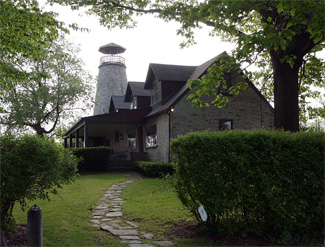 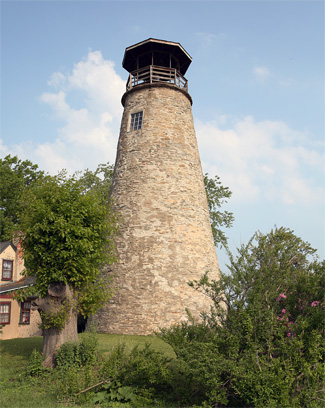 In 1828, Congress appropriated five thousand dollars to construct a lighthouse at Portland Harbor, which had just been designated an official port of entry. Portland was a small town located twenty miles west of Dunkirk, New York and thirty-three miles east of Erie, Pennsylvania and would later have its name changed to Barcelona. In the early 1800s, warehouses and wharves had been established to serve the small vessels transporting lumber, salt, flour, and fish to and from the port. The harbor provided a safe haven for sail and steam cargo vessels and a rest spot for passengers traveling between Erie and Buffalo. From Portland Harbor, portage was available to Chautauqua Lake and on to the Allegheny River, which led south to Pittsburgh. A lot on a bluff overlooking the harbor was purchased from Wilhelm Willink, Wilhelm Willink the younger, and Cornelius Vallenhoven on July 10, 1828 for $50. The following month, a $2,700 contract for constructing the lighthouse and a keepers dwelling was awarded to Judge Thomas B. Campbell, whose commission was 2.5%. The contract specifically called for 11 patent lamps; eleven 14 reflectors and 2 spare lamps; double tin oil butts for 500 gals. of oil; 1 lantern canister and iron trivet, etc.

Using native, rough-split, fieldstone, Campbell constructed a forty-foot conical tower with a base diameter of twenty-two feet. The outer ends of the wooden treads in the spiral staircase were embedded in the towers masonry, while a massive timber standing at the center of the tower supported the inner ends. A keepers dwelling and outhouse were fashioned out of the same local materials, and, like the lighthouse, they were each given a double coat of whitewash. Out of the original $5,000 appropriation, only $3,506.78 was spent, and the remaining money was carried to the surplus fund.

The first keeper, appointed on May 27, 1829 at an annual salary of $350, was Joshua Lane, a deaf, superannuated clergyman, having numerous female dependents. Lane and his family enjoyed the comforts of the thirty-two by twenty foot keepers cottage, which had two main rooms on the ground floor, each equipped with a fireplace, and bedrooms upstairs. The houses walls were twenty inches thick, and a wing on the east end served as the kitchen. The interior woodwork was finished in a plain, decent style, with good seasoned stuff.

On January 1, 1831, Thomas Campbell signed a contract with the Collector of Customs and Lighthouse Inspector at Buffalo to provide Barcelona Lighthouse with natural gas at all times and seasons and to keep the apparatus and fixtures in repair at an annual cost of $213, payable quarterly. The resulting illumination by natural gas of the first public building in the United States was described at the time as follows:

The Lighthouse at Portland Harbor in the County of Chautauqua and State of New York, is now illuminated, in the most splendid style, by natural carbureted hydrogen gas. Ever since the first settlement of the country about Portland, it has been known that an inflammable gas constantly issued from the fissures of a rock, which forms the bed of a little brook that empties into Lake Erie, near the harbor, in such quantity as to be easily set on fire by applying a flame to it. This fountain of gas was known to the early settlers of the country by the name of the burning spring. No valuable use, however, was made of this gas until Mr. W. A. Hart, an ingenious gunsmith of the village of Fredonia, and some other young mechanics, five or six years ago, collected a quantity of similar gas from the rocky bed of Canadaway Creek in a reservoir, and conveyed it from thence to all the principal stores, taverns, and shops in the said village, where it is still used instead of lamps.

To capture the gas, workers dug into the rock where the largest quantity of gas was found to create a well with a depth of three feet and a diameter of roughly forty feet. A masonry cap was erected over this well, and natural gas was transported via hollowed-out wooden pipes to Portland Harbor Lighthouse. To burn the gas atop the tower, W.A. Hart built a unique stand of lamps consisting of two tiers of horizontal arms that extended in a semicircle from a central tube. The lower level had seven arms and the upper six, spaced evenly above the arms of the lower tier. At the end of each arm was a gas burner with a reflector. A stopcock regulated the quantity of gas consumed by each lamp. One observer remarked that the light exceeds both in quantity and brilliancy, anything of the kind I ever saw. It was also stated that when viewed from Lake Erie at night, it looked as if the whole tower were one complete, constant and unwavering blaze.

In 1838, Lieutenant Charles T. Platt of the Navy gave the following report on the status of the natural gas supply at Portland Harbor Lighthouse. Owing to a failure of gas, that may be attributed to excessive drought, oil is now substituted. It is presumed, however, that the fall rains will replenish the stream from which the fountain is supplied, and thus prevent the escape and loss of the gas. The recurrence of such a drought will, if ever occurring, be at great intervals, and will not then, probably, render the use of oil for a long time necessary.

Natural gas was in use at the lighthouse until at least 1851, as the Treasury Department report for that year included this paragraph: We have one lighthouse at Portland on Lake Erie, lighted with natural gas, carried a distance of two miles in pipes to the tower; and even here we are obliged to keep oil and lamps, as water frequently collects in the pipes, over which the gas will not pass, and whilst they are being taken up and freed from water, oil light has to be used. We have a contract for supplying this gas at the annual cost of the oil which would be required, if lighted with that material.

Joshua Lane kept the light until his death in 1846, when Joshua La Due took over the duties for the same salary of $350 that his predecessor had been receiving for over a decade. The Annual Report of the Lighthouse Board for 1855 noted that Barcelona did not possess a proper harbor, and that its lighthouse was not necessary even as a lake coast light. This remark was likely due to the Great Gale of 1844, which destroyed a number of lakeside warehouses and wharves, including those at Barcelona. Local officials tried to restore the port to its former importance, but the opening of a railroad to nearby Westfield in 1852 doomed this effort. Even though it was considered unnecessary, Barcelona Lighthouse was fitted with a lens apparatus (a fourth-order Fresnel lens) in 1857. Two years later, the Lighthouse Board discontinued Barcelona Lighthouse, citing as a reason the mutations of commerce and changes of channels or harbors.

According to a clause in the original deed, the lighthouse property was to revert to the Holland Land Company, if the light were discontinued. This is how the land fell into the hands of Lieutenant Governor George W. Patterson, an agent for the company, and in 1872 he paid $500 to the government for the structures on the property. In the 1880s, the original keepers house was enlarged and dormers were added. The original lantern room was likely removed when the tower was discontinued. An open wooden lantern, which ties in nicely with the adjacent dwelling, was later placed atop the tower.

In 1929, on the hundredth anniversary of the establishment of the lighthouse, the Patterson chapter of the Daughters of the American Revolution unveiled a bronze tablet mounted above the door to the lighthouse. In 1941, the property was leased to the Bedford Products Company of Dunkirk, who opened the dwelling as a wayside refreshment stand where visitors could purchase light lunches featuring their jams, jellies, and juices. The tower had also been renovated so tourists could climb the winding stairway for a view of the harbor.

In 1943, G. Patterson Crandall, a great-grandson of George Patterson, started a restoration of the tower and dwelling, that saw the addition of a huge log-burning fireplace in the parlor. For furnishings, Crandall used rare Shaker pieces and family antiques.

On April 10, 1962, a day that had been designated National Gaslight Day, Barcelona Lighthouse was re-supplied with natural gas as a sentimental nod to its past significance. The Iroquois Gas Company, who supplied the pipes and fixtures for the project, noted Mr. Crandalls historical knowledge and foresight in restoring the Barcelona harbor lighthouse and its famous gaslight will serve as a permanent reminder of the important part this community has played as a pioneer in the development of natural gas.

Though a light is still maintained in the tower, it is not considered an aid to navigation. The tower and dwelling were placed on the National Register of Historic Places in 1972.

The lighthouse remained in the Patterson family for five generations and more than a century, until Bruce and Ann Mulkin of Fredonia, New York purchased it from the estate of Faith Scott in 1998. In April 2005, the Mulkins put the property on the market for $999,000, and in 2008, the New York State Office of Parks, Recreation and Historic Preservation acquired it. The Westfield Town Board has entered into an annual license agreement with New York State Parks, and the Westfield-Barcelona Community Chamber of Commerce and the Chautauqua County Visitors Bureau now offer tourism information in the keepers dwelling.

Today, Barcelona Harbor sports a pair of concrete and steel breakwaters and a publicly accessible pier.

For a larger map of Barcelona (Portland Harbor) Lighthouse, click the lighthouse in the above map.

From Interstate 90, take Exit 60 and go north on Portage Road to Highway 5. Turn right on Highway 5, and the lighthouse will be on your left after just a short distance. New York State Office of Parks, Recreation and Historic Preservation acquired Barcelona Lighthouse in 2008, and the keeper's cottage is now home to the Westfield Visitor Center during the summer.