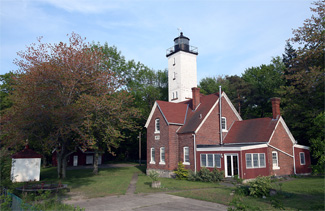 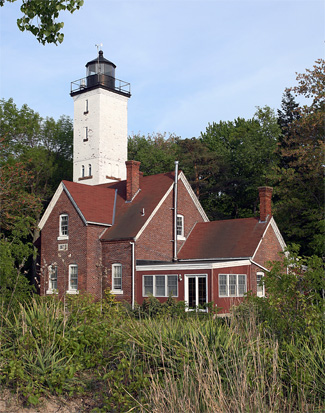 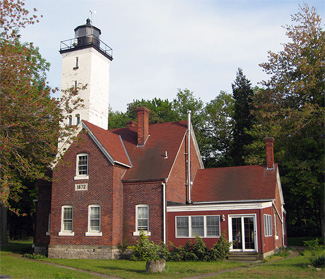 At the City of Erie, a peninsula, over six miles in length, arches out into the water of Lake Erie forming an expansive natural harbor. French explorers recognized the intrinsic value of the harbor and in 1753 constructed Fort Presque Isle on the mainland near the harbor entrance. The name Presque Isle means almost an island in French and referred to the nearby peninsula. From Fort Presque Isle, fur traders could portage their goods fifteen miles to Fort Le Boeuf, located at the upper reaches of the Allegheny River near present-day Waterford, and then float downstream to Pittsburgh and on to Louisiana. Fort Presque Isle and its portage thus became a vital link between the French fur trade network in the Great Lakes and its colony on the Gulf Coast. Control of the Presque Isle region was wrested from the French in 1760 during the French and Indian War, and following the Revolution, the area was incorporated into the State of Pennsylvania in 1792. During the War of 1812, the harbor at Presque Isle was used to construct six warships, including the Brig Niagara, which played a role in Admiral Perrys convincing victory over the British in the historic Battle of Lake Erie.

The first lighthouse at Erie, and indeed the first American lighthouse on the Great Lakes, was constructed on a mainland bluff in 1818, not far from the site of Fort Presque Isle. For decades, the commercial importance of Erie was directly tied to shipping on the Great Lakes, which increased dramatically in 1824 following the completion of the Erie Canal connecting Buffalo to the Hudson River. The success of New Yorks canal prompted Pennsylvania to link Philadelphia to Pittsburgh with a network of canals that opened in 1834. A decade later, the Erie Extension Canal was completed, and the City of Erie became a vital link to cities along the Ohio and Mississippi Rivers.

In 1870, plans were begun for a lighthouse on the north shore of the Presque Isle Peninsula that would replace Erie Land Lighthouse on the mainland. This new light would be several miles nearer the lake, and being located directly on the peninsula, would better mark that navigational hazard.

Congress appropriated funds for its construction on June 10, 1872, and proposals were solicited for the necessary building materials. The lighthouse was originally going to be built of limestone, but when this provided to be too costly, bricks were used instead.

Construction on the peninsula began in September 1872, and the light from atop the forty-foot tower attached to the keepers dwelling was first exhibited on July 12, 1873. The hazard of landing material at the site was evidenced by the loss of a scow carrying 6,000 bricks.

The walls of the lighthouse tower were built with five courses of brick in order to withstand the fierce storms and buffeting winds that blow off the lake. Though square on the outside, the tower is circular inside and supports a spiral staircase, forged in Pittsburgh and barged to Erie. The brick keepers dwelling originally had an oil room, bedroom, dining room, kitchen, and summer kitchen on the main floor, and three bedrooms and a drying room on the second floor. Beneath the dwelling were located a cistern and a cellar. The cost for the lighthouse was $15,000.

Charles Waldo was the first keeper of Presque Isle Lighthouse, earning an annual salary of $520. On the day of the inaugural lighting, Keeper Waldo wrote, This is a new station and a light will be exhibited for the first time tonight - there was one visitor. Prior to sundown, Waldo would have lit the lantern inside the towers Fresnel lens and then throughout the night returned to check the oil level in the lamp. In 1882, the tower was equipped with a revolving fourth-order Fresnel lens that alternately produced a red and white flash every ten seconds. Before this, the tower exhibited a fixed white light punctuated each minute by a red flash. As the other lighthouses at Erie displayed fixed lights, the locals often called Presque Isle Lighthouse the flash light.

The old Erie Land Lighthouse on the bluff was discontinued in 1880, much of its purpose having been assumed by Presque Isle Lighthouse. The lighthouse was partially dismantled and the property was sold off, but the light was re-established in 1885 after mariners protested the decision to extinguish it.

In 1876, Keeper Waldos wife, Mary, gave birth at the lighthouse to a baby girl, the first child to be born on Presque Isle. During their seven-year stay at the lighthouse, the Waldo family had an isolated existence, as the road to the peninsula was not completed until 1927. In fact, Keeper Waldo referred to the station as the loneliest place on earth. To reach civilization, the keepers and their families would have to walk along a 1.5-mile pathway, part of which was originally a boardwalk due to the marshy terrain it traversed, to reach the stations boathouse on Misery Bay. A lengthy row across the bay and another walk were then required to reach the nearest school or store where provisions could be obtained. The pathway was finally paved in 1925, which led to its being called the sidewalk trail.

The Lighthouse Board noted in 1886 that the shoreline in front of the lighthouse had receded thirty feet during the previous two years. To curb this erosion, contractors built a 400-foot-long and 10-foot-wide jetty composed of stone-filled cribs during the summer of 1886. The work was successful as five years later it was noted that the beach had built up substantially on both sides of the jetty, which extended perpendicular to the shoreline.

In 1894, a tight board fence, 396 feet long and 5 feet high, was built on the east, north, and west sides of the dwelling to protect the station buildings and the keepers garden from the encroachment of sand.

To increase the range of the light, the height of the tower was increased seventeen feet, four inches in 1896 to produce a focal plane of seventy-three feet. When kerosene was adopted as the fuel for the light in 1898, an oil house was constructed near the northeast corner of the station to provide detached storage for the volatile liquid. A year later, the extended tower was painted white to provide a more prominent daymark for vessels on Lake Erie.

Andrew Shaw, Jr. became keeper of Presque Isle Lighthouse in 1901 and was recognized multiple times by the Lighthouse Service for saving life and property. In 1916, when the tug Henry E. Gillen stranded on the bar at the entrance to the harbor, Keeper Shaw summoned assistance and cared for articles that washed ashore. Two years later, a yacht was driven ashore near the station, and Keeper Shaw provided food, shelter, and clothing for its three passengers. Keeper Shaw prevented a fire near the station from spreading in 1917, and in 1925 both he and the keeper of Presque Isle Pierhead Lighthouse helped fight a fire that burned for several days on the peninsula.

In 1924, commercial electricity reached the lighthouse, and an oil-engine-driven generator was installed at the station in case of power failure. Presque Isle peninsula was set aside as a state park in 1921, and after the road to the peninsula was completed in 1927, Keeper Shaw abruptly retired, as too many visitors were attracted to the lighthouse. Frank Huntington took over the responsibilities of keeper and served until 1944, after which enlisted Coast Guard personnel tended the light. On January 8, 1928, Keeper Huntington, his wife, and son rescued two boys who had fallen through the ice near the station and were in danger of drowning. The Fresnel lens atop the tower was replaced by a modern beacon in 1962.

Additions were made to the front and back of the dwelling in 1989 and 1990, and in 1998 Presque Isle Lighthouse was officially transferred to the Pennsylvania Department of Conservation and Natural Resources, who used the lighthouse as a residence for park personnel. In 2006, the lighthouse was opened for two days during Discover Presque Isle Weekend, and visitors waited in line for more than two hours to climb the seventy-eight steps to the top of the tower. More than 750 people paid $2 to make the climb, and there was still a lengthy line at closing time on the second day.

Keepers of the Erie Lights was formed in 2006 to gather information on Eries three lighthouses and to help with their restoration and interpretation. From 2006 through 2009, the committee focused on Presque Isle Lighthouse, and a Historic Structures Report on the lighthouse was published in June 2007. The report includes a history of the lighthouse and outlines a restoration plan that includes replacing the dwellings roof, repointing the masonry, and restoring the porch, oil house, and fence. The public can help the effort by purchasing a Pennsylvania specialty license plate featuring an image of Presque Isle Lighthouse.

In 2014, Pennsylvanias Secretary of Conservation and Natural Resources changed a rule that required the manager of Presque Isle Park to reside in the park. After the park manager vacated the lighthouse, and the property was leased to the non-profit Presque Isle Light Station Board, which opened the station to the public in 2015. Between Memorial Day weekend and Labor Day weekend in 2016, the first full season the lighthouse was open to the public, 30,000 people toured the keeper's dwelling with 13,500 of them paying to climb the tower. The $94,000 raised from climbing fees and gift shop purchases will help fund needed improvements.

For a larger map of Presque Isle Lighthouse, click the lighthouse in the above map.

From the intersection of Interstates 79 and 90 near Erie, go north on Interstate 79 5.6 miles to its end at 12th Street. Turn left on 12th Street, travel 1.1 miles, and turn right on Peninsula Drive (Highway 832). Follow Peninsula Drive 5.6 miles onto Presque Isle Peninsula and into Presque Isle State Park where you will see the lighthouse on your left. The lighthouse is open to the public daily from 10:00 a.m. to 5:00 p.m. between Memorial Day and Labor Day.

Scenic boat tours, which provide the chance to view the three Erie-area lighthouses from the water, are offered during the summer months.

The lighthouse is owned by the Pennsylvania Department of Conservation and Natural Resources. Dwelling/tower open.


Besides the official three lighthouses in Erie, Pennsylvania, there are a couple more that are worth mentioning. In Presque Isle State Park near the "Waterworks Area" is a lighthouse erected in 1906 by the "Commissioners of Water Works in the City of Erie." The second lighthouse is a bit more modern and marks the entrance to the Erie Yacht Club.