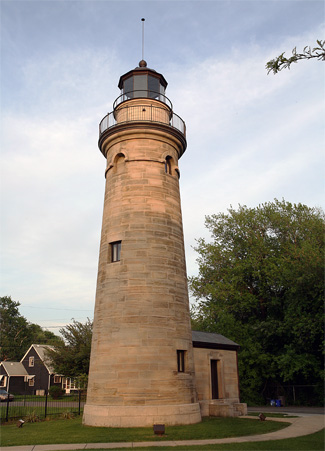 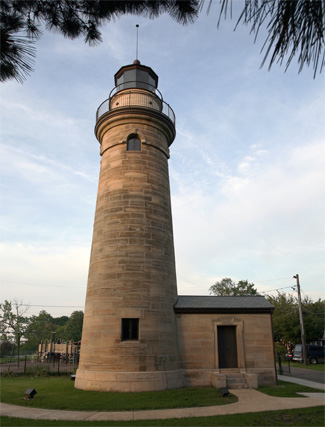 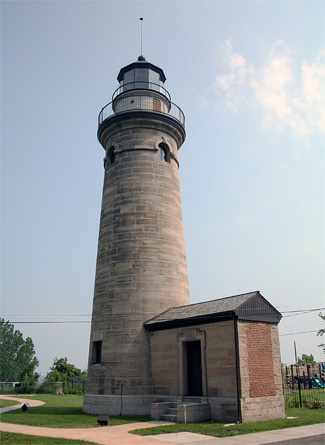 Anxious to add a port on the Great Lakes to its western frontier, Pennsylvania paid $151,640 for a triangular section of land in 1792 that included forty-five miles of lakeshore on Lake Erie. Three years before this deed was granted by President George Washington, Pennsylvania had paid the Iroquois Nation $2,000 to relinquish its rights to the land and pave the way for the sale. A slender, seven-mile-long peninsula, named Presque Isle, which means almost an island in French, arches out from a section of this lakeshore and forms a fine natural harbor, nearly five miles long and one mile wide, that has been called the finest on Lake Erie. Recognizing the need to improve navigation on the Great Lakes and mark important harbors, Congress passed an act in 1810 authorizing the Secretary of the Treasury to establish such a light as he deemed proper on or near Presqisle, in Lake Erie. Soon thereafter, two acres of land on a mainland bluff overlooking the eastern entrance to the harbor were obtained from John Kelso. Though Congress provided money for construction of the lighthouse in 1810 and 1811, the work was delayed by the outbreak of the War of 1812. A new allocation of $17,000 was made on March 3, 1817 for the construction of two lighthouses on Lake Erie, and Presque Isle Lighthouse and Buffalo Lighthouse were completed and commenced operation in 1818. These lights are considered the first American lighthouses built on the Great Lakes.

The contract for the lighthouse called for a twenty-foot stone tower with a diameter of 9½ feet at its abase and 7½ feet at its top. Surmounting the tower was a nine-foot-tall iron lantern sheltering an array of ten lamps and reflectors. Thanks to the height of the bluff on which it stood, the lighthouse had a focal plane of ninety-three feet. Nearby, a one-story frame dwelling comprising three rooms was provided for the keeper.

In his forties, Captain John Bone assumed the position of keeper in 1818 and served until 1832  a length of service that would only be matched by the lights final keeper. According to the 1830 census, besides Bone, his wife, four girls ranging in age from twenty something to a youngster nearly five, and two boys between the ages of ten and fifteen all called the tiny keepers dwelling home.

When an inspector visited the lighthouse in 1838, he found the station in good shape and considered the light to be one of the most useful on the south shores of the lake. The lighthouse, however, did share one deficiency with several other lights in the country  its lamp chimneys were so short, not reaching above the scallops of the reflectors, that soot collected on the reflectors, reducing their effectiveness.

An inspection in 1851 found that the 1818 stone tower was starting to settle. Metal bands were placed around the tower to stabilize it, but by 1857 it was evident that the tower would have to be replaced. Thomas Mehaffey was hired to oversee the construction of a new tower using brick from Milwaukee. This use of imported brick infuriated several local citizens who felt that bricks of comparable quality could have easily been obtained nearby at much less expense.

With a height of fifty-six feet, the replacement tower was more than twice as tall as its diminutive predecessor. A third-order Fresnel lens, called a splendid affair by the local paper, was installed in the towers lantern room. Powered by just a single lamp, this lens produced a fixed white light that was visible from a distance of thirteen miles. A new one-and-a-half-story, five-room brick dwelling was also completed in 1858.

After less than a decade of service, the new lighthouse was suffering from the same problem that had caused the demise of the first tower  a settling foundation  and frost had also contributed to cracks in its walls. The brick lighthouse was dismantled in 1866, and test borings made shortly thereafter revealed a layer of quicksand in the underlying soil that was the cause of the settling. When work commenced on a third lighthouse, plenty of attention was given to providing a proper foundation. The selected site, farther removed from the bluffs edge, was excavated to a depth of twenty feet and then filled with eight layers of solid oak twelve-inch-square timbers. Six feet of crushed limestone set in Portland cement and several courses of stone also set in cement, were then placed atop the timbers.

Upon this massive foundation, a forty-nine-foot-tall tower with a diameter of nineteen feet at its base and fourteen feet at its top was constructed using Berea sandstone. The basal diameter was greater than that of the previous towers and helped to distribute the weight of the tower over a larger area. Six windows were incorporated into the tower: one at the base, one at the first landing, one at the second landing, and three with a semi-circular arch and keystone just below the gallery. Attached to the southern side of the tower is the oil room. The year of completion, 1867, is inscribed in decorative stonework above the lighthouse door. A third-order Fresnel lens, which produced a fixed white light, was used in the lantern room.

On March 3, 1871, Congress appropriated funds to raise the roof of the keepers dwelling to provide for a full second story. Other renovations made at the same time included renewing brickwork around the windows, restoring floors, replastering the dwelling, refurbishing the barn, and building a fence partway around the property.

Presque Isle Lighthouse reduced the usefulness of the bluff-top lighthouse, and in 1880 the Lighthouse Board decided Erie Lighthouse could be discontinued. The tower, minus its lantern, illuminating apparatus and iron stairs, which were removed and placed in storage at the lighthouse depot in Buffalo, was sold at public auction on March 1, 1881 along with the dwelling for $1,800 to Myron Sanford, owner of the surrounding land.

Local citizens and mariners, who had long relied on the lighthouse, protested the decision, and on July 7, 1884, Congress provided $7,000 to re-establish the light. The property was promptly repurchased, and a custodian was paid to watch the site, which was endangered by tramps, until the lighthouse could be reactivated. Most of the metalwork was still in storage in Buffalo, but some pieces were missing or broken and had to be replaced. This unexpected work delayed the reactivation of the light until July 1, 1885, when the light from a new revolving third-order Fresnel was exhibited from the tower.

In 1894, a supply of natural gas was piped from a nearby well to the keepers dwelling, where it was used for fuel. George W. Miller was made the first keeper of the re-established light, transferring to Erie after sixteen years at Conneaut Lighthouse. Keeper Miller would serve until 1899, when Erie Land Lighthouse lost its keeper for good. The lantern room was removed from the tower and transferred to Marblehead Lighthouse in Ohio, where it is still in use today.

In 1934, the federal government turned the property over to the City of Erie for public-park purposes. The city rents the 1858 keepers dwelling to caretakers, who look after the lighthouse property, now known as Lighthouse Park.

In ceremonies held on December 17, 1990, a new wooden lantern room was unveiled at the lighthouse, and on December 26, 1999, exactly one hundred years from when it was last extinguished, a ceremonial relighting was held at the lighthouse. In 2000, archaeologists found the foundation of the original lighthouse at a site 200 yards west of the current tower.

The Erie-Western Pennsylvania Port Authority secured money for a thorough restoration of the lighthouse in the form of $300,000 from the Pennsylvania Department of Transportation in 1999 and a $90,000 grant from the Pennsylvania Historic and Museum Commission in 2000. After the scope of the work was determined through consultations with the International Chimney Corporation, the Port Authority awarded a contract to Fiske & Sons of Erie, who had extensive historic restoration experience. A new lantern room with a copper roof and ventilator ball was fabricated to replace the wooden faux lantern, which coincidentally was severely damaged by a windstorm in May of 2003, just before the restoration work began. In addition, the interior brick masonry that supports the iron staircase was repaired, the exterior masonry was repointed, a new slate roof was placed on the oil room, a lightning arrestor system was installed, and the entire lighthouse was pressure washed. The restored lighthouse was rededicated on June 19, 2004 when a new state historical marker was unveiled at an event that attracted a sizable gathering of lighthouse enthusiasts.

In 2011, actors from Erie Playhouse dressed up in period costumes and offered tours explaining the history and mystery of the lighthouse to raise funds for the Erie Playhouse Youtheatre. Public interest in the tours, which were offered during Labor Day weekend and the preceding weekend, was deemed sufficient to schedule additional tours in subsequent years.

For a larger map of Erie Land Lighthouse, click the lighthouse in the above map.

From the intersection of Interstates 79 and 90 in Erie, take Interstate 79 north 5.6 miles to its end at 12th Street. Turn right onto 12th Street (Highway 5), and follow it 3.7 miles to East Street. Turn north on East Street, travel 0.5 miles, then turn right on Lake Road (Highway 5 Alternate). After three blocks, turn left on Lighthouse Street. The lighthouse will be on your left near the end of Lighthouse Street.

The lighthouse is open on Saturday and Sunday and the frist Tuesday of each month from 11 am to 3 pm.

The lighthouse is owned by the City of Erie. Grounds open, tower open on weekends in season.