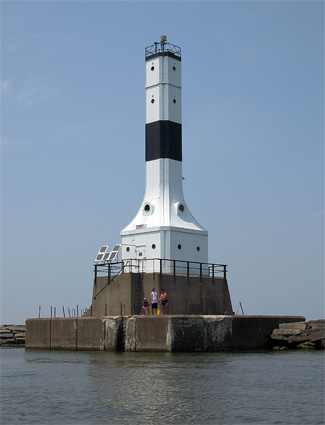 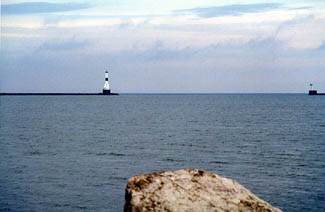 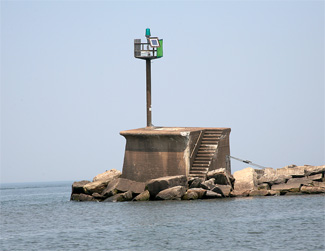 The town of Conneaut (pronounced con-e-aught), located in the northeast corner of Ohio, lies on an old Indian trail, subsequently used by settlers seeking their fortunes on the western frontier. Seneca Indians called the creek that empties into Lake Erie at this point Konyiat, meaning place of many fish, from which the towns name was derived.

As the town grew, the port became an important shipping point for grain, whiskey, and forest products in the nineteenth century. Later, the products shipped from the port included limestone and coal.

In 1829, Congress appropriated $7,500 to construct piers at the mouth of the Conneaut River, and in 1835 a lighthouse was built atop the eastern pier. In 1838, Charles T. Platt inspected the lighthouses on Lake Erie and noted that the beacon at Conneaut was built of wood and lighted with four plain lamps. Platt recommended that Winslow Lewis patent lamps be used instead and that a dwelling be built for the keeper as he was currently forced to rent a tenement at the rate of $75 per year.

A keepers dwelling was finally built in 1872, but this was not until after a new pierhead lighthouse had been constructed in 1859. Yet another pierhead beacon commenced operation in 1875, after $4,000 for its construction was appropriated in 1874. This beacon was placed on the west pier, instead of the east pier where the previous one stood, so it could be more easily reached from the keepers dwelling. An elevated walk was erected to permit the keeper to access the tower even when the pier was awash.

By 1885, the commerce at Conneaut had fallen and the harbor piers had been allowed to decay and fall into ruin. To save the west pier beacon, it was moved in November of that year to the high bluff where the keepers dwelling stood. After new enterprises were established that promised to make Conneaut a leading port in the shipment of iron and coal, harbor improvements were made including the establishment of a five-day lens lantern on the west pier in November 1892. This served until money was appropriated for an enclosed, square tower surmounted by an octagonal, copper-roofed lantern room. The new light commenced operation on September 8, 1895. On March 1, 1897, the light formerly used in the tower located near the keepers dwelling was activated in a new square, pyramidal tower on the inner end of the west pier to form, with the light on the outer end of the pier, a range for approaching the entrance to the harbor.

In 1896, a project was authorized for the construction of two detached, converging breakwaters to shelter the entrance to the parallel piers at Conneaut. On June 28, 1902, Congress appropriated $8,400 for a new lighthouse on the detached west breakwater and for modifying a light on the west pier to serve as a rear range with the breakwater light. As all the received bids for constructing the new lighthouse were excessive, the necessary material was purchased on the open market, and the lighthouse was built at the Buffalo lighthouse depot. After the War Department completed a new pierhead on the breakwater in 1906, the new lighthouse was placed upon it that October, and the old rear pier light was relocated to the outer end of the pier to range with the new breakwater light.

The 1906 breakwater light was a wooden, cylindrical tower covered with iron and painted white. A wooden winding stairway provided access to the second floor from which an iron ladder led to the lantern room. The lighthouse measured thirty-one-and-a-half feet tall and showed a fixed white light using a fifth-order Chance Brothers lens. The rear range tower stood nearly thirty-nine feet tall, was painted red, and exhibited a fixed red light from a fifth-order, F. Barbier & Co. lens. A fog bell was added to the breakwater light in 1910.

The superstructure is a reinforced concrete building two stories in height with a tower rising in northeast corner. The cellar contains oil-storage tanks and other storerooms; the first floor provides a power room, kitchen, office and supply room; the second floor contains the water tanks, air receivers and a bedroom and the diaphone apparatus is placed in the tower. The light was placed in commission September 15, 1920, and the fog signal went into operation April 15, 1922.

A second-order lens was employed in the lantern room to produce two white flashes every twelve seconds, while the diaphone fog signal sounded a group of two blasts every thirty seconds when necessary. A fog bell was used at the new lighthouse until the diaphone fog signal was in place. The total cost for the lighthouse and other improvements to navigational aids for the harbor came to $89,667.

Edward Pfister was appointed head keeper of Conneaut Lighthouse in 1894 and would spend over forty years at the station, by far more than any other keeper. On January 10, 1922, the tug Oregon was towing the lighter T.F. Newman when the cable snapped, and the lighter wrecked on the breakwater near the lighthouse. Keeper Pfister lowered the stations boat to the water, picked up the seven men from the lighter, and took them back to the lighthouse, where they were provided food and lodging. The Lighthouse Service awarded the efficiency flag to Pfister for having the station with the highest general efficiency in the district during 1925. As a result, Pfister was allowed to fly the flag for all of 1926.

In 1934, the 980-foot-long, east-west section of the west breakwater was removed, and a 852-foot, rubble-mound, lakeward extension of the west breakwater was built. As a result, the 1920 cement lighthouse was blasted from its bedrock grip on the breakwater using dynamite and replaced by a new, sleek tower costing $70,000. The square, steel tower stands sixty feet tall, and its light and fog signal, which were originally operated by electric power transmitted through a submarine cable, were commissioned on April 1, 1936.

This modern lighthouse was nominated for inclusion on the National Register of Historic Places by the Ohio State Historic Preservation Office in 1992. The petition was reviewed by Patrick Andrews and subsequently added to the list. Regarding the lighthouse, Andrews said that in the 1930s there was a conscious effort to represent the machine age, speed and efficiency. The style of this lighthouse is a clear attempt to look modern and to make a break from the past.

Originally painted white, the tower was later given a horizontal black band as a daymark. The lantern room from the prior lighthouse was used atop the modern tower until 1972, when the light was automated and a modern beacon replaced the lantern room. Today, the tower produces alternating red and white flashes with a five second period.

A secondary light has been placed on the east breakwater as seen in the photograph to the left. This beacon displays a green light.

Pizzi Café commissioned local artist William E. Dalton to research and paint the various Conneaut Lighthouses that have graced the harbor through the years. These paintings now grace the walls of this popular café and help preserve the little-known history of the early lights.

In May 2007, Conneaut West Breakwater Lighthouse, deemed excess by the Coast Guard, was offered at no cost to eligible entities, including federal, state, and local agencies, non-profit corporations, and educational organizations. When no qualified owner was found, an online auction for the lighthouse was initiated on September 9, 2008. No bids were received during September, but Gary Zaremba, president of Artisan Restoration Group of New York, eventually submitted a winning bid of $35,000. This wasnt the first lighthouse purchased Zaremba, as he also won the auction for Maines Lubec Channel Lighthouse in 2007.

Zaremba visited Conneaut Lighthouse during the spring of 2009, and when he was unable to find a boat to take him out to his light, he waded across the harbor, scaled the detached breakwater, and walked out to the tower. Calling the acquisition of the lighthouse a fun, interesting opportunity, Zaremba planned to open the structure to guided tours and believed that someday he might even offer overnight stays in the lighthouse, whose first and second floors are the size of an average living room.

When Zaremba did not pursue a lease from Ohio for the bottomlands on which the tower stands, the lighthouse reverted to the General Services Administration. A new auction was scheduled for October 2009, but it was called off at the last minute and rescheduled for spring 2010 or later.

On June 1, 2011, the second auction opened for Conneaut West Breakwater Lighthouse. Six bidders participated in the auction, which concluded on July 31 with a winning bid of $46,000. Jerry Killilea Jr., a businessman, UPS driver, and part-time farmer from Orient, Ohio was the winning bidder and planned to use the lighthouse as a retreat for his large extended family. Killilea had to purchase a $1 million general liability insurance policy to obtain an Army Corps of Engineers lease for the breakwater upon which the light is constructed.

In 2018, Jerry and Karen Killilea decided to sell their lighthouse due to the distance of the lighthouse from their home and Jerrys diagnosis of cancer. After noting that they had made just one visit to Conneaut in 2017, Karen said the lighthouse deserves more visits than they were then able to give it. The asking price for the lighthouse was $72,000. After Jerry passed away in 2018, the family used a portion of his life insurance to pay down a loan and retain ownership of the lighthouse. The family continues to enjoy summer visits to Conneaut.

For a larger map of Conneaut West Breakwater Lighthouse, click the lighthouse in the above map.

From Interstate 90 south of Conneaut, take Exit 241 and travel north on Highway 7 1.8 miles to Highway 20. Take Highway 20 east for 0.2 miles to Broad Street. Go north on Broad Street to its end, where views of Conneaut Lighthouse can be had from several places. The breakwater on which the lighthouse stands is not connected to land, but some people do wade or swim to reach it.