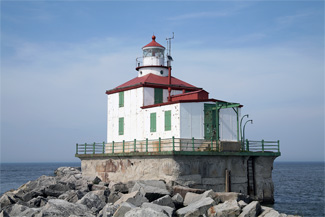 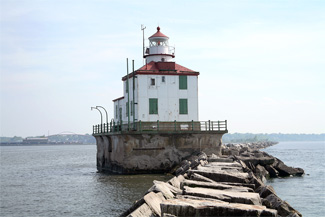 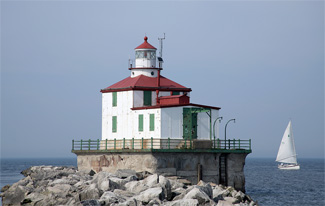 Ashtabula Lighthouse is located near the northern end of the west breakwater in Ashtabula Harbor. Though the current lighthouse is more than a century old, it is not the first to stand watch over the harbor. This honor belongs to the 1836 hexagonal tower shown at right, which sat atop a forty-foot-square wooden crib that was connected to Ashtabula Rivers east pier by a ramp. The first light keeper on record was Samuel Miniger whose charge was to keep the beacons eight lamps burning using sperm whale oil. A fifth-order Fresnel lens was installed in the lantern room in 1855, changing the light's characteristic to fixed white interrupted every ninety seconds by a flash. On August 2, 1871, the federal government purchased two lots at Ashtabula Harbor to build a home for the lighthouse keeper. Construction of the dwelling began during the spring of the following year, and the wooden home was soon ready for the light keeper and his family. Over two decades later, in 1898, the government built an addition on the dwellings eastern side, converting the structure into a duplex to house the head and assistant keepers and their families.

With the opening of navigation in 1876, a new lighthouse, a square, pyramidal tower with a height of thirty feet, was placed in operation at Ashtabula, this time on the west pierhead due to the construction of new dock facilities. An elevated walk was provided so the keeper could reach the tower when the pier was awash. In 1880, sixty feet of the walkway had to be repaired after it was damaged by a schooner, and in 1882, the lighthouse was moved 471 feet toward the end of the lengthened pier and the elevated walk was extended the same distance.

With the number of vessels calling at Ashtabula rapidly increasing, the Lighthouse Board requested funds in 1890 for a fog signal and a second light on the pier to form a range.

The entrance to this harbor is narrow, and there is a light only on the end of one pier. It is important that before reaching the end of this pier vessels should be headed directly parallel to it, otherwise they are liable to run into one of the two piers, or pass outside of both. There is no fixed light in the harbor on which to range. Hence pilots are at a loss at night to get a sure range toward which to head in time to get their craft straight before making the end of the pier. A suitable range light can be erected at small cost near the inner end of the pier, on which the light is located and made to range with the light on the outer end.

Congress appropriated $4,700 on March 3, 1891 for the range light and a steam fog signal, and a contract was made that summer for a triangular skeleton tower, fitted with ball bearing wheels for a lens hoisting apparatus. The tower was erected in 1891 but not lit due to a lack of funds. On May 17, 1892, the schooner Chippewa collided with the tower and caused it to topple, delaying the establishment of the rear range light to September 25, 1893.

The steam fog signal was placed in a wooden structure, covered with corrugated iron and painted brown, adjoining the outer pierhead beacon. The six-inch whistle was ready for operation on September 30, 1893, and six years later, the fog signal was upgraded to a ten-inch whistle.

On November 1, 1895, a dredge working in the harbor struck the rear iron tower with its boom, causing sufficient damage that it fell the next day. A temporary wooden tower was used for the rear light until a new tower was erected in time for the opening of navigation in 1897. The new tower displayed a white light, six feet above a red light.

In the early 1900s, Ashtabula River was widened and a breakwall was built to protect the harbor. Work on a third lighthouse, the one still in use today, started in 1904 at the end of the new breakwater. The lighthouse consisted of a square, two-story, iron structure with a short cylindrical tower rising from the center of its hipped roof. A fixed, fourth-order red light and a compressed-air siren were established in the new lighthouse on June 3, 1905, and the steam whistle at the outer end of the west pier was discontinued.

As part of the River and Harbor Act of June 25, 1910, the extension of Ashtabula's west breakwater, 1,500 feet shoreward and 1,700 feet lakeward, was authorized along with the construction of a new east breakwater to enclose an enlarged outer harbor. On October 14, 1913, Congress authorized $45,000 for rearranging and providing new navigational aids for the harbor. In 1915, the metal lighthouse was moved approximately 1,750 feet NNE of its previous site to a new forty by sixty-foot pierhead, where its light was placed in operation on August 31, 1915. A steel addition, measuring twenty by twenty-four feet, was added to the lighthouse to house a diaphone fog signal that commenced operation on March 26, 1917. A fourth-order Fresnel lens that revolved atop a bed of mercury was placed in commission on September 21, 1916, changing the characteristic of the harbor's main light to a white flash every five seconds. The lighthouse had an engine room, bedroom, and bathroom on the first floor, and a living room, pantry, bedroom, and tank room on the second floor. In 1929, the light was electrified and a radiobeacon was added to the station.

Though the lighthouse had been renovated and expanded, it was still vulnerable to Lake Eries ships and elements. In 1927, the steamer Gleneagles of the Canadian Steamship Lines rammed into the structure, driving it back six inches. Surprisingly, no one was hurt, although the ship sustained major damage. A more famous story is that of two keepers stationed at Ashtabula during the winter of 1928. A severe storm encapsulated the lighthouse in ice, trapping them inside for two days. The men eventually thawed the door open but then had to "dig a trench through ice with pick and crowbar for a distance of nearly 40 feet to reach the side of the crib, so that a ladder could be placed on the breakwater."

Civilian keepers continued to tend the lighthouse into the beginning of the twentieth century. Living in the house on Walnut Boulevard, they looked after the beacon faithfully, alternating duties at the lighthouse and making relief trips by boat.

When Noel Buck Price started serving as a keeper at Ashtabula during the early 1950s, he was only nineteen years old. Each member of the crew would stand watch on a six-on and six-off schedule, and while on watch, was responsible for checking and reporting weather conditions to the Cleveland Weather Bureau, who then broadcasted the information to merchant and commercial ships sailing Lake Eries waters. Price recalls that when visibility would get down to a few hundred yards, he and his fellow light keepers would turn on the fog signal, while the lamp was turned on at dusk and off at dawn. Much of Prices off-duty time was spent reading, playing ping-pong, shooting baskets in a miniature hoop, swimming, fishing or listening to an AM radio. There were three keepers in his attachment, and they would spend six days on the light and three days off on a rotational basis. At times though the lake was too rough for their liberty boat to land, and they would be forced to extend their stay at the lighthouse. Fresh drinking water and food supplies had to be transported out to the light by the crew.

The foghorn blew two blasts every minute, and although the beacon light was automated, operation of the foghorn required human intervention. In addition to the foghorn, the light station used a radiobeacon to transmit a dash-dash-dot signal at a specific period. These aids proved invaluable to the ships sailing in and out of the harbor.

Ashtabula Lighthouse remained manned by the Coast Guard until 1973. At that time, it was the last remaining manned light on Lake Erie. That same year, the keepers residence, which was serving as Coast Guard housing, was deeded over to the City of Ashtabula. The citys original plan was to convert the dwelling into a Western Reserve and Marine History Museum, commemorating early Indian life. However, due to a lack of funds the property defaulted back to the federal government in 1976.

In 1982, the Ashtabula Jaycees and the Ashtabula Marine Museum Committee were awarded the building from the General Services Administration (GSA). The Ashtabula Maritime Museum was officially dedicated on June 2, 1984, and was opened to the public later that year. The museum features a pictorial history of the city, as well as a collection of ship models and the pilothouse from the steamer Thomas Walters.

For a larger map of Ashtabula Lighthouse, click the lighthouse in the above map.

You can hike the breakwater to the lighthouse, but the blocks in the breakwater are VERY uneven making for an arduous and potentially dangerous journey. If you decide to attempt the trek, take a cell phone with you in case you need assistance. To reach the breakwater, go west on Walnut Boulevard from the museum, and then turn right on Lake Avenue and follow it to Walnut Beach Park.

The fourth-order Fresnel lens used in Ashtabula Lighthouse is on display at the museum.


In the biography for Assistant Keeper Thomas Baker posted in the Ashtabula Marine Museum, his daughter states that Keeper Baker would at times need to walk the ice-covered breakwater to the lighthouse in the fall and early winter. To manage this feat, he had spikes that could be affixed to his shoes. The giant stones in the breakwater must have been a whole lot more level back then than they are now, as I have walked several breakwaters and not encountered one as difficult as the one at Ashtabula. I was informed by the Ashtabula Lighthouse Historian that a young man in the spring of 2005 slipped on the breakwater and broke his leg. Before he was found, he was suffering badly from hypothermia.