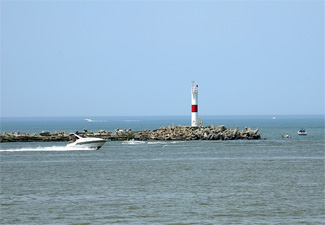 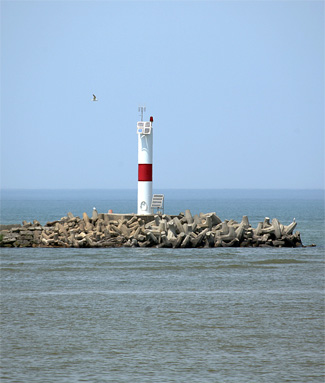 Set on the southern shore of Lake Erie at the mouth of the Cuyahoga River, Cleveland early on became an important port in the Great Lakes region. In the early 1830s, as Clevelands waterways were attracting an ever-increasing number of vessels for industry and transportation, the city erected its first light station. Because Lake Erie is relatively shallow and storms can quickly stir up huge and violent waves, the city eventually added breakwaters to protect the inner harbor along the Cuyahoga River and create an expansive outer harbor.

Between 1876 and 1883, a breakwater was constructed on the western side of the entrance to the river, and a lighthouse was established on its eastern end in 1884. This west breakwater parallels the shore for roughly 4,000 feet before angling toward shore at its western end. Work began on an east breakwater in 1888 using the same line as the west breakwater, but leaving a 500-foot gap for the harbor entrance. The east breakwater also had a shore arm at Ninth Street. The outer harbor thus formed was nearly two miles long, 1,700 feet wide, and contained an area of roughly 375 acres.

As noted in the 1901 annual report of the Army Corps of Engineers, harbor improvements had created an economic boom:

Cleveland has come to be the principal city of Ohio and the seventh city of the Union, by reason of its location at a point where the materials for making iron and steel assemble cheaply; where many kinds of manufacturing can be carried on advantageously and distribution can be readily made. It is for this reason that Cleveland leads all the cities of the Union in the diversity of manufactures, as is doubtless the case. The most important single element contributing to this result is cheap water transportation.

The Lake Carriers Association noted the establishment of Cleveland East Entrance Light in its 1915 report.

On June 30, 1915, a group flashing white light was established at the end of the extension of the east breakwater at Cleveland Harbor, known as Cleveland East Breakwater East End Light. The light is shown from a skeleton steel tower and is about 40 feet above the water. Plans are under way to improve this light by installing electricity as the illuminant, giving a much more powerful light, also to establish an electric siren fog signal. The light and fog signal will be controlled from shore by means of an electric cable connecting the light with the power station directly opposite.

On May 1, 1916 the light was changed to an occulting white electric light, repeatedly showing eight seconds of light followed by a two-second eclipse. An electric siren was established at the light on May 15, 1916.

In 1918, a new steel, skeletal tower with an enclosure at its top was placed at the east entrance. An air diaphone was installed in the enclosure and commenced operation on July 24, 1918, keeping the same characteristic as the siren  a four-second blast every twenty seconds. The new tower and installation of the diaphone cost $6,262. The following year, a new armored submarine cable had to be laid at a cost of $6,473.

After several decades, a modern D9 steel tower, like those used for other pierhead lights on the Great Lakes, replaced the East Entrance Lighthouse. The current cylindrical forty-seven-foot tower is white with a distinctive red band in the middle. It displays a red light that flashes three seconds on, three seconds off. Because the breakwater is not attached to the shore, the light is accessible only by boat.

For a larger map of Cleveland East Entrance Lighthouse, click the lighthouse in the above map.

From Interstate 90/Highway 2, take the Marginal Road (East 55th Street) Exit, and go northeast on North Marginal Road to Cleveland Lakefront State Park, where you will see the light at the end of the offshore breakwater.