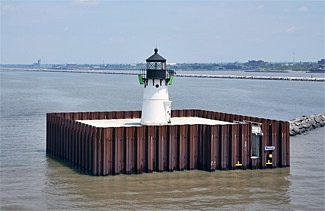 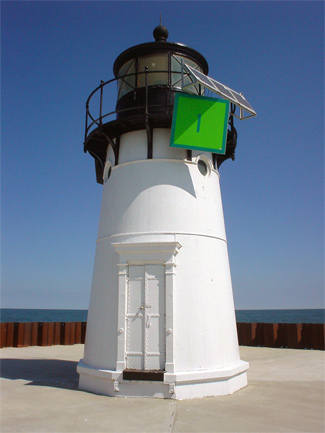 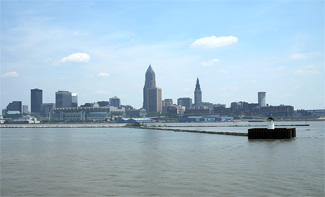 Today, Cleveland is known more for its basketball, football, and baseball teams and its Rock and Roll Hall of Fame and Museum than for its contributions to the oil and iron industries, but it wasnt always so. Clevelands proximity to huge supplies of coal and iron ore helped make it a leading steel producer, and by the late 1800s the Cuyahoga River had become a vital part of the citys expanding industries as increasing numbers of oil refineries and chemical and steel plants sprang up along its banks.

With all the industry, however, came environmental damage. Eventually the debris and chemicals on the river were so thick that, in 1936, a spark from a blowtorch ignited them, and the river literally caught fire. Naturally, this incident was both embarrassing and dangerous, but several more fires broke out on the river before 1969, when the city began a major clean-up campaign, which would influence the creation of the Environmental Protection Agency. The pollution today is far less severe, and a large sight-seeing vessel offers cruises along the river, interpreting the industry that was and still is located along the waterway.

The river cruises also include a short trip out into Lake Erie where two lighthouses mark the ends of the breakwaters that define the entrance to the Cuyahoga River. The two lighthouses, the Cleveland Harbor Main Entrance Lighthouse and the East Breakwater Lighthouse, were activated in 1911 on a pair of spurs that were extended into Lake Erie from the existing breakwaters. (When built, these lighthouses were known as East Pierhead Light and West Pierhead Light.) Before the extensions, a pair of lighthouses, as seen in the picture to the right, marked the ends of the breakwaters at the entrance to Cleveland Harbor and a third light marked the end of the west pier at the entrance to the Cuyahoga River.

The creation of an outer harbor at Cleveland began with the construction of a breakwater west of the entrance to the Cuyahoga River between 1876 and 1883. A similar breakwater was built on the eastern side of the river entrance starting in 1888.

Sailing through the gap separating the two breakwaters in rough seas was akin to threading a needle with a shaky hand. Before the completion of the breakwaters, mariners had similar difficulty making their way between the two piers that lined the river entrance.

On November 11, 1884, there occurred a rescue that the U.S. Life-Saving Service called one of the most thrilling episodes in the annals of the life-saving service at Cleveland, Ohio. Around 9 oclock on that stormy night, the life-saving service noticed a schooner-rigged barge, the John T. Johnson, off the east pier, attempting to make the harbor. Battling high waves, Keeper Charles C. Goodwin and his crew rowed out in a surfboat, passing the tugboat Forest City whose captain said that if they could rig a cable to the ship, he could tow it safely into the harbor.

By the time the crew reached the distressed barge, the waves were crashing over it, and the spray was freezing almost on contact. From the deck of the Johnson, Keeper Goodwin hailed Assistant Lighthouse Keeper Reed, who was nearby on the pier, and told him they were ready for the tug. However, conditions had become so rough that the tug master now refused to go out, and the exhausted life-saving crew decided to row back to their station to get the breeches buoy apparatus.

One crew member, John Eveleigh, was left aboard the Johnson, and the rest of the crew boarded the surfboat for their return trip. Only 100 yards out, the surfboat was swamped by a huge wave. The crew bailed furiously, but soon another wave sent them plunging into the icy waters. Onlookers along the pier saw the men struggling to hold onto the capsized boat and threw them ropes. According to the rescuers, the battered, freezing men could not speak, being barely conscious when rescued.

Though nearly exhausted, the lifesaving crew knew their work was far from over, and after changing into dry clothing, they hauled the breeches buoy apparatus to the scene. By midnight they had fired the Lyle gun. Surfman Eveleigh, who was perched in the barges rigging with the seven members of the Johnsons crew, caught the line, and soon the breeches buoy had transported everyone from the crippled vessel to the pier. Though badly damaged, the schooner was subsequently saved along with most of its cargo.

For this night of bravery, the entire life-saving crew won the Gold Life Saving Medal. One of the doughty crew members, Frederick T. Hatch, went on to become a lighthouse keeper at Cleveland, and later earned the distinction of being the first person to receive a gold bar on his Life Saving Medal after a daring rescue on the west breakwater.

On June 27, 1911, the east breakwater west end light was changed from a fixed white to a flashing white light and shown from a twenty-five-foot-tall square, steel, pyramidal tower. This new tower replaced a taller tower supported by wooden legs and was equipped with a sun valve to operate its acetylene light.

Today, boats approaching Cleveland sail past the east breakwater pierhead upon which the white tower with a black lantern room has been standing since 1911. The lighthouse is now dwarfed by the high-rise buildings on shore, but its steady beam serves as a reminder of the citys nautical roots.

In 2005, the East Breakwater Pierhead Lighthouse was temporarily removed so the U.S. Army Corps of Engineers could perform necessary repairs on the pier. In May 2007, the lighthouse, deemed excess by the Coast Guard, was offered at no cost to eligible entities, including federal, state, and local agencies, non-profit corporations, and educational organizations. When no qualified owner was found, an online auction for the lighthouse was initiated on September 9, 2008, and it closed on December 2, with the lighthouse selling for $10,000.

An August 2009 article in Cleveland Magazine revealed the new owner of the lighthouse to be Gary Zaremba, president of New York City-based Artisan Restoration Group. This isnt Zarembas first lighthouse auction win, as he purchased Lubec Channel Lighthouse in Maine in 2007 and Ohios Conneaut West Breakwater Lighthouse in 2008. I want to control the navigation of America, Zaremba jokes. Thats my goal. His plan for the diminutive East Breakwater Pierhead Lighthouse is to install a composting toilet and rent the light and its expansive cement pier to boaters who are looking for a unique place to enjoy the skyline, catch some sun, or perhaps have a barbecue.

For a larger map of Cleveland Harbor East Breakwater Lighthouse, click the lighthouse in the above map.

The best way to view this light is from the Goodtime III, which offers cruises of Cleveland Harbor and Cuyahoga River. The cruises leave from the pier at the end of 9th Street near the Rock and Roll Hall of Fame and the Cleveland Browns football stadium. Distant views of the light are also possible from this area. The lighthouse can probably also be viewed while enjoying lunch or dinner aboard the Nautica Queen.