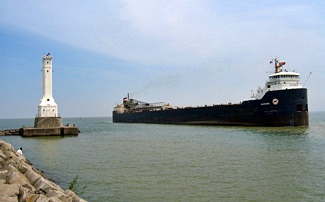 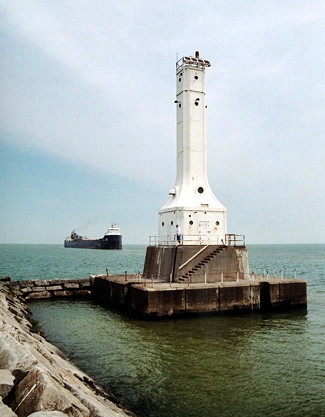 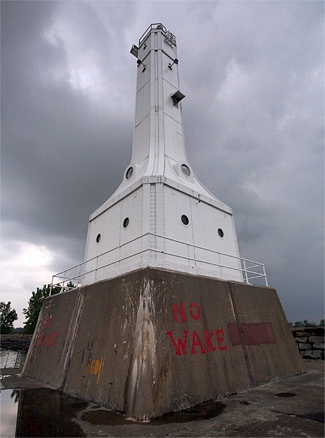 The mouth of the Huron River on Lake Erie was one of the first ports of Ohio to be settled. As early as 1749, a French trading post operated from this port, but it did not survive the Revolutionary War. Around the beginning of the nineteenth century, another trading post was opened along the river, this time by a French Canadian. Areas along both the Huron River and Lake Erie continued to grow, and soon Huron, east of Sandusky, had become a large settlement. By 1824, a small boarding house and several logs cabins had been built, one of them being the home of Hurons first shipbuilder. Other shipbuilders followed, and the steamboat Delaware was completed at Huron in 1834 only to be lost two years later during a violent summer storm on Lake Michigan. Though its passengers and crew would survive, the boat itself suffered irreparable damages.

As commerce increased at Huron, so too did the need for a navigational aid at the port. The first Huron Harbor Lighthouse was built in 1835 on the west pier, and the following description of the beacon was given in 1838 by Lieutenant Charles T. Platt of the U.S. Navy.

Huron beacon is lighted with eight lamps, and as many bright reflectors, fixed, and all in good order. The beacon stands on the west pier, which extends 900 feet into the lake. This is an excellent harbor, having from 14 to 18 feet of water for more than six miles up the river. The entrance between the piers is 175 feet in width, which is the average breadth of the river as far as navigable. Between the piers, however, we find but 11 feet of water.

A dwelling for the keeper is here requisite, and the following estimate is respectfully submitted: a house 32 by 25 feet, one and a half story in height, so partitioned as to make two rooms, with a bed-room and larder on the first floor, and two arched rooms on the second floor, with a good cellar, may be built for $1,200, of brick, under contract. The necessary out-buildings, with fences, including a well of water, may be built for $250. A lot, of 50 feet front by 120 feet rear, may be purchased for $500; making a total of $1,950.

A dwelling was built for the keeper, but it was later washed away along with half of the lot on which it stood. The lighthouse, a pyramidal tower constructed of wood, was not durable enough to withstand the wind and weather of Lake Erie, and it too met an unfortunate end during a fierce storm in May 1854. A new light was built three years later, and this time it was constructed of iron as were similar towers built in 1857 for Erie, Pennsylvania and Lorain, Ohio. The bottom portion of Huron Harbors twenty-seven-foot-tall, iron tower was open, exposing its circular stairway that led to an enclosed watchroom and lantern room the latter of which was equipped with a fourth-order Fresnel lens. An elevated walkway was also built so the keeper could access the tower when waves swept over the pier.

The station was without a dwelling for several years until Congress finally appropriated the necessary funds on March 3, 1871. After vexatious delays in obtaining title to a lot and dealing with a sick construction crew, the dwelling was finally occupied on February 1, 1873.

Huron Harbor Lighthouse had numerous keepers through the years with most serving just a year or two. Emanuel Fisher, a one-arm man, replaced Alexander Ledgyard as keeper in 1843, but was removed from office in early 1844 by the Secretary of the Treasury after a petition calling for Fishers removal was circulated in the area. In response, a list of the names of 300 persons, who all agreed the light was in excellent order, was submitted to Washington. Joseph Barns, an earlier keeper of the light, wrote, I have lived here in this place almost sixteen years, and the people here are always at work in meddling with other folkss business, in particular about the lighthouse. No man can satisfy the citizens of this place; but the sailors are satisfied as to the lights. Shortly after Fisher became keeper, an inspector reported, I am happy to inform you that Mr. Fisher has effected a great reformation here, and is very efficient in the performance of his duties, which he executes with astonishing alacrity with his single arm.

In his own defense, Fisher sent the following to the Secretary of the Treasury:

In taking possession, I found the government house in an exceeding bad condition, everything out of repair; it had more the appearance of an ancient deserted castle, than a government house. The light-house in the same condition. The bottoms of the lamps were melted off, by the upper lamps being fitted directly over the head of the lower lamps.

I might go on, almost ad infinitum, to report the different causes, circumstances and difficulties that have surrounded me during my brief appointment to the Huron light-house; but sufficient, I am induced to think, has been said, to convince the most skeptical mind that I have performed my duty to the government in the most faithful manner, notwithstanding the difficulties I have encountered; and that I leave the government house, not as I found it, in a general dilapidated condition, but in the most perfect order.

Despite numerous letters of support, Fishers dismissal was not reversed, and Alexander P. Chesley was appointed keeper in his stead.

A veteran of the Civil War, Richard Mansell was the first keeper of the light to hold the position for more than four years, and he held it an incredible forty years, from 1870 to 1909. An article in the Sandusky Daily Register in 1890 detailed Keeper Mansells dedication during a storm that was called the most severe that has visited Huron for a long time.

It was now growing quite dark and Mr. Richard Mansell, in spite of the gale, started out to light the lamp in the Huron light house. Mr. Mansell is not a large man and people who watched his departure along the narrow, winding pathway thought he would scarcely reach his destination at all. Richard is not easily daunted, however, and holding onto the light hand-rail when the gusts came the hardest, he managed to work his way out to the open space on the extreme end of the pathway. There was no railing there and his figure was scarcely visible as he made a dive for the iron stairway leading up to the light house. He had scarcely grasped the banister when a wave dashed over the ends of the pier, washing it clear of all obstacles and dashing its spray over the light house forty feet in the air. Richard was safe, however, and in a moment more the bright light of the great Parisian lamp gave evidence that he was safe from all the storm.

In 1900, the lower portion of the tower was covered with sheathing and metal shingles and painted white below the lantern room. According to an 1878 Light List, the tower had previously been painted black on its lower part and red on its upper portion. An oil house was erected adjacent to the tower in 1903.

In 1908, the Lighthouse Board noted that Huron was rapidly becoming a harbor of importance and warranted the establishment of efficient lights for all vessels desiring to use the harbor. The number of vessels using the port had increased from 891 in 1906 to 1,136 in 1907, prompting the Board to request $3,800 to relocate the pierhead tower to the outer end of the west pier extension when it was completed and place a second light on the pier to form a range for entering the harbor. Congress finally responded to the request on June 12, 1917, appropriating $4,500 for the project.

The rear light was placed at a bend in the west pier, roughly 400 yards from the pierhead light, and consisted of a square, pyramidal, skeletal tower surmounted by a railed platform holding duplicate fourteen-inch headlight reflectors. The fixed red rear range light had a focal plane of seventy-one feet and went into operation on August 29, 1919. A fog bell, which was also included in the appropriation, was established in the tower at the end of the pier on April 9, 1923.

In 1928, the intensity of the front light was increased through the introduction of electricity as the illuminant, and the fog bell was replaced by an air diaphone that sounded a group of two blasts every thirty seconds.

A project was begun in May 1934 to create a 1,200-foot, rubble-mound extension to the west pier and remove 300 feet from the outer end of the east breakwater to widen the entrance to the harbor and create a larger turning basin in the Huron River. This work was completed the following year, and a fifty-foot-square crib was built at the outer end of the west pier to serve as the foundation for a steel lighthouse of a new design.

A reflection of the artistic style of the 1930s, the Art Deco lighthouse was fabricated by F. P. Dillon and W. G. Will and consists of a square, cylindrical tower on a square fog signal building. The lighthouse stands seventy-two feet high and was placed in commission on April 8, 1936. Its sister at Conneaut, approximately 120 miles to the northeast, was also built by Dillon and Will that same year.

After the light was automated in 1972, the towers lantern room was removed, and a modern beacon consisting of a solar-powered 375mm lens was installed. Still in use today, the light has a focal plane of eighty feet, can be seen over a twelve-mile radius, and flashes a red light with a characteristic of three seconds on followed by three seconds off.

At the mouth of Huron River, two slips capable of accommodating large lake freighters have been constructed. Huron Harbor Lighthouse guides the mighty freighters into the safe confines of the breakwaters where their cargoes of coal, iron ore, and grain can be safely loaded and unloaded.

The Huron Harbor breakwater is frequently used as a fishing pier, and the dredge spoil adjacent to it is being transformed by the Army Corps of Engineers into a sixty-four-acre island that is slated to become a town park. The square cement foundation, which was formerly home to the pierhead light for many years, is still clearly evident as you stroll out to the modern light.

The Coast Guard solarized Huron Harbor Lighthouse around 2015 and did away with the cable that carried commercial power to the tower. This change resulted in four downward-pointing lights that illuminated the exterior of the tower being discontinued. After nearly two years of negotiation with the Coast Guard, the City of Huron received permission to relight the exterior of the tower. Experiments were carried out in 2018, and in 2019, four LED lights were mounted around the base of the lighthouse to illuminate the white tower. The color of the decorative lights can be changed for holidays or special occasions.

For a larger map of Huron Harbor Lighthouse, click the lighthouse in the above map.

From Interstate 90, take O13 north to O6 (John Campbell Blvd) and turn left. Take the first right, which is Williams Street, and follow it until ends at Wall Street. Turn right on Wall Street and continue to Main Street, where you will find parking on your left. Walk out on the concrete pier until you have to cut left on a dirt trail to the sea wall that leads to Huron Harbor Lighthouse. A historical marker telling about the lighthouse is found near the intersection of Wall Street and Main Street.