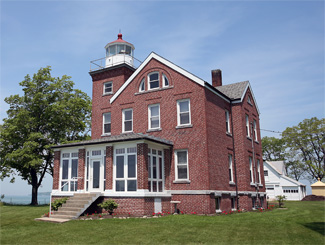 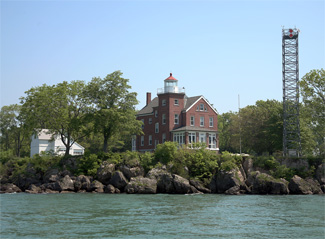 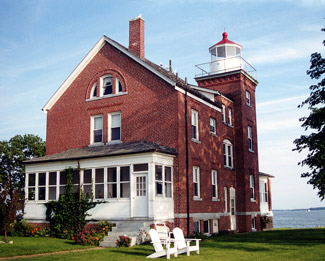 The Lake Erie Islands are a collection of small islands located in Lake Eries western basin. Following the Revolutionary War, most of these islands became part of the Connecticut Reserve, and by the end of the eighteenth century the Connecticut Land Company was offering the islands for sale. In 1807, Pierpont Edwards, a veteran of the Revolutionary War, purchased both Middle and South Bass Islands, along with Green, Sugar, Ballast, Gibraltar and Starve Islands, for the sum of $26,087. Just a few years later, the islands would be the site of a key naval engagement known as the Battle of Lake Erie that was fought on September 10, 1813 as part of the War of 1812. At the conclusion of the war, Edwards men wasted no time in occupying South Bass Island and taking advantage of its natural resources. Timber, limestone, and cordwood were soon being shipped to the mainland along a route that became known as the South Passage. This route, which ran between the Marblehead Peninsula and the southern ends of South Bass and Kelleys Island, was soon teeming with commercial boats.

In 1854, the Edwards family sold their islands to Jose de Rivera Saint Jurgo for $44,000. Instead of selling off the islands natural resources, Jurgo decided to plant vineyards. His wines quickly became popular, and soon the Bass Islands had earned the nickname Wine Islands. Despite their extreme northern location, the islands surprisingly have the longest frost-free period of any area in Ohio due to the stabilizing effect of the lake.

The next four decades saw South Bass Islands popularity increase tremendously. Records show an impressive 15,000 visitors in 1859 alone. The islands heyday truly came in the 1890s, however, with the grand opening of Hotel Victory in 1892.

With the South Passage now acting as the primary navigational route not just for commercial vessels but for passenger and leisure boats as well, there was growing concern about the safety of the waterway. Rocky reefs lay hidden in the shallow waters, and sailing through the area could prove treacherous in the late fall when sudden storms could wreak havoc on Lake Erie.

The federal government purchased two acres at Parkers Point, the extreme southwest tip of the island, from Alfred and Mary Parker in May 1895 for $1,000. A contract was made in 1896 for constructing the lighthouse, but the winning bidder failed to execute the required bond, and the work had to be readvertised. All of the bids received in the second round exceeded the available funds so the work was performed by hired labor with materials purchased on the open market.

Unlike the days typical design of a large lighthouse with a small, detached keepers dwelling, South Bass Island Lighthouse consisted of a large, two-and-a-half-story, redbrick dwelling with an attached, twelve-foot-square tower. The tower stood forty-five feet tall when finished and was crowned with a fourth-order, L. Sautter & Cie., Fresnel lens that produced a fixed red light through the use of a ruby chimney in its lamp.

Keeper Harry H. Riley lit South Bass Island Lighthouse for the first time on July 10, 1897. Under his care, the lighthouse would perform its duty daily during the shipping season, which typically ran from early March through late December. Rileys time on the island was cut short, however, when on September 1, 1898, he was taken into custody by Sandusky police because of problems associated with his mental health. Keeper Riley was convinced he owned a fast racehorse and was inviting everyone to the fairgrounds to see the horse go for a record. Riley passed away the following March at a state hospital. Mrs. Riley took charge of the lighthouse during her husbands illness.

Keeper Charles B. Duggan arrived at the lighthouse in 1908, after having served five years at West Sister Island. Besides caring for the light, Duggan also cultivated twenty acres of land. A vineyard occupied eight acres, and the rest was devoted to a peach orchard and general farming. In 1915, he helped a crew of eight from the burning steam barge Isabel Joyce land at the station and then cared for them. Keeper Duggan fell to his death from a forty-five-foot cliff on the western end of the island in April 1925. Twenty-year-old Lyle Duggan cared for the light in place of his father until the following year, when Green Island Lighthouse was automated, and its keeper, William F. Gordon, was transferred to South Bass Island Lighthouse.

The characteristic of South Bass Island Lighthouse was changed at the opening of navigation in 1926 to alternating red and white flashes, the former characteristic of Green Island Light. On September 7, 1929, the intensity of the light was greatly increased through the installation of electricity as the illuminant. The white flash went from 1,800 candlepower to 32,000, while the red flash increased from 540 to 9,600 candlepower.

A total of eleven keepers served at the lighthouse, the last being Paul F. Prochnow, who departed the island in 1962 after fifteen years of service. Keeper Prochnows lightkeeping career almost ended prematurely in 1959, when his Model A Ford fell through the ice near Green Island. Prochnow and a friend had to swim thirty feet to the surface from where the car ended up parked on the bottom of Lake Erie. By the time Prochnows days as keeper on South Bass Island were drawing to a close, technology had changed dramatically. When he retired, the living quarters were put up for rent, and the Coast Guard replaced the lighthouse with an automated electronic light mounted atop a steel tower. With the automation, the Fresnel lens became a piece of the islands past and was placed in the Lake Erie Island Historical Museum, where it can still be viewed today.

Harry Johnson of Williston, Ohio rented the lighthouse for five years at a rate of $66.50 per month, and then in 1967, the Coast Guard turned the lighthouse over to the United States Department of Health, Education, and Welfares Division of Surplus Property. L.S. Putnam, Director of The Ohio State Universitys Stone Laboratory, located on Gibraltar Island just offshore from Put-in-Bay, recognized the unique opportunity that this presented. South Bass Island was not only close to Stone Laboratory, but it also provided many research advantages. Putnam proposed that OSUs Board of Trustees apply for ownership. The Board agreed with Putnam, and in October 1967, OSU became guardian of South Bass Island Lighthouse through a thirty-year quitclaim deed.

The lighthouse received another technological addition in 1983 when the National Oceanic and Atmospheric Administration determined that it was a good location for a meteorological station. Once completed, the $50,000 structure made it possible for the National Weather Service to receive satellite transmission of weather statistics from the island.

Less than a century after its construction, South Bass Island Lighthouse was placed on the National Register of Historic Places in 1990. Seven years later, OSU gained permanent ownership of the property when the original quitclaim deed expired. The Coast Guard, however, still maintains ownership of the skeletal light tower.

South Bass Island Lighthouse is now home to OSU research and academic staff. The lighthouse and grounds have typically not been accessible to the public, but this changed in 2007 when the university started offering tours during the summer. Besides the lighthouse and a modern replacement light tower, an 1899 barn and an 1897 oil house remain standing on the property.

For a larger map of South Bass Island Lighthouse, click the lighthouse in the above map.

The lighthouse can be seen from the ferries to South Bass Harbor which leave from either Catawba or Port Clinton. The Miller ferry dock is located just a few hundred yards from the lighthouse. South Bass Island Lighthouse and grounds surrounding it are owned by Ohio State University and access is normally restricted. However, in recent years tours have been offered during the summer. For more information call Ohio State's Stone Laboratory at (614) 292-8949.

A great way to view the island is by golf cart or bicycle, both of which can be rented at either ferry landing.

The Fresnel lens formerly used in the lighthouse remains on the island and is on display at Lake Erie Islands Historical Society Museum in Put-in-Bay. The museum can be reached at (419) 285-2804.

The lighthouse is owned by Ohio State University and managed by Stone Laboratory. Grounds/dwelling open during tour.