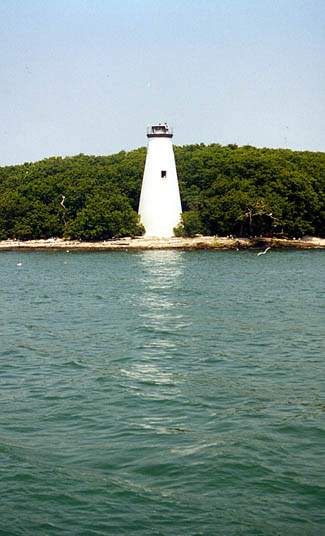 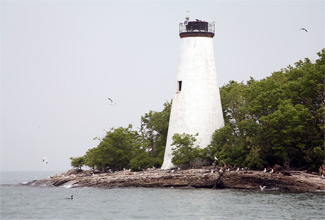 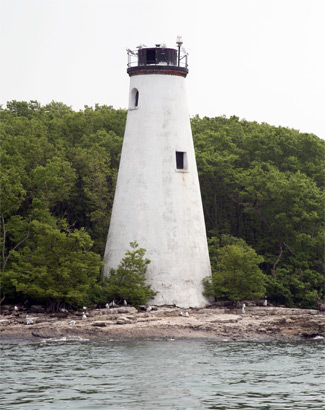 Eighty-two-acre West Sister Island is located in the southwestern basin of Lake Erie, approximately eight miles from Ohios mainland. It was in this region that Commodore Oliver Perry defeated the British in the Battle of Lake Erie on September 10, 1813 and sent his famous message to General William Harrison: We have met the enemy and they are ours. Two ships, two brigs, one schooner and one sloop. After having been appointed by the Board of Navy Commissioners to examine and select sites for lighthouses in the Great Lakes, Lieutenant G. J. Pendergrast reported in 1837 of the need for two additional lighthouses on Lake Erie.

The first is the Middle Sister island, belonging to Great Britain. ... The second place where I think a light would be of service, is on the Western Sister island, situated in a direct course from Put-in bay to Maumee, and distant about fifteen miles from each. Should a light be placed on this island, it ought to be colored.

A decade later, a lighthouse was established on the westernmost point of West Sister Island to mark the west end of the South Passage through Lake Eries Bass Islands. The forty-foot, conical tower was built of stone and tapered from a diameter of fifteen feet at its base to seven feet at its lantern room. A brick keepers dwelling, measuring twenty by thirty feet, was built near the tower.

Ten lamps backed by fourteen-inch reflectors were being used in the lantern room in 1848 to produce a fixed white light. This number was later increased to eleven, and in 1857 a fourth-order Fresnel lens was installed in the towers lantern room.

The Lighthouse Board report for 1866 noted that the structures on West Sister Island were starting to deteriorate. The wall of the tower of the West Sister light-house, Lake Erie, though in good condition shows dampness, and the stone coping and the lantern, which are leaky, require repairs. The wooden caps and sills also are decayed. The keepers dwelling is in a very dilapidated condition, and the front steps and floors of the house are rotten. The Board requested funds to supply the tower with an interior brick cylinder, cast-iron stairway, stone caps and sills, cast-iron deck-plate and lantern of modern design, and to construct a new keepers dwelling, connected to the tower by a covered passage.

The requested funds were appropriated in 1867, and the work was carried out in 1868. A new boathouse was added to the station in 1868. A cistern used to hold rainwater served as the stations only water supply until 1886, when a well was sunk through granite and water was obtained at a depth of thirty-two feet.

A pier, consisting of a ninety-foot-long and sixteen-foot-wide timber crib that was filled with stone and decked over, was built in the fall of 1887, but it was destroyed by floating ice in February 1888. In 1889, a boat harbor was constructed 400 feet east of the tower in the form of an L-shaped pier, but it too was soon damaged by floating ice. Wrought-iron plates were later used to protect the stations wharves from ice.

A circular iron oil house was built atop a concrete foundation on the island and lined with brick in 1890. Prior to this, the oil for the lamp had been stored in the passageway between the tower and dwelling.

A second story was added to the keepers dwelling in 1902. Besides the tower, dwelling, and boathouse, the station also had a barn, chicken house, and a carpenter shop. An old kitchen and dining room were relocated in 1900 and converted into a schoolroom and playhouse. In times of fog, the keepers would often ring a bell mounted atop the carpenter shop.

Nathan Edson was keeper of the lighthouse until his death at the station in February 1869, at which time Edsons son-in-law, Martin Goulden, left his own wife and Mrs. Edson on the island and set out in the stations boat for Toledo to obtain a coffin. Mid-journey, a sudden blizzard started to rage, forcing Goulden to seek refuge at the lighthouse on Turtle Island. The following day, Nathan Wint Edson, keeper of Turtle Island Lighthouse and son of the deceased keeper, decided to accompany Goulden to Toledo, but after traveling just a mile from the island, their boat was crushed by lake ice, plunging them into the frigid water. They attempted to make their way back to the island, but their bodies were later found frozen fast in the ice.

Harrison Haynes was appointed head keeper at West Sister Island in 1871, and in his spare time, he raised a flock of turkeys on the island. Shortly before Thanksgiving one year, the family killed and dressed seventy-five plump turkeys. The tug Swansen was due the next morning to take the turkeys to market, but the ice surrounding the island stopped the tug just within sight of the lighthouse family. Haynes daughter recalls that it was turkey, morning, noon, and night that winter, and since then she has not been able to take a single bite of turkey.

Chancie (Chauncey) Fitzmorris started his lengthy service on West Sister Island in 1909 and was repeatedly recognized by the Lighthouse Service for assisting vessels in distress. Perhaps the most dramatic of his rescues happened in 1916 when the forty-five-foot yacht Luella capsized two miles west of the island in a severe storm. After seeing the mishap, Keeper Fitzmorris put out in the stations small boat and, after a half-hour battling the storm, managed to save five adults and a baby. He reportedly had to chop through the walls of the yachts cabin to free two women and the baby.

Most keepers on the Great Lakes left their stations at the close of the shipping season, typically around mid-December, but Keeper Fitzmorris would often remain on West Sister Island, claiming he enjoyed the quietude of the island during the long winter months. His winter sojourns nearly cost him his life in 1919 when he was gored by a bull on March 31. (Fitzmorris raised cattle, rabbits, turkey, and quail on the island.) After a red distress signal had been burning in the lighthouse for nearly two weeks, someone on Locust Point, the nearest spot on the mainland to the island, finally noticed it and helped organize a rescue party. A lifesaving crew from Marblehead battled choppy seas for five hours to reach the island, and upon their arrival, they found Fitzmorris at the threshold of death. After recovering in a hospital, Fitzmorris insisted on returning to his island. Keeper Fitzmorris filed for compensation, but the government gave the following ruling: the claimant was engaged on his own personal business and the injury was not sustained while in the performance of duty for the Government. Claim for compensation is accordingly disallowed.

In December 1927, fishermen Louis Francke and W. M. Meyers were bringing in their nets when they encountered heavy ice that cut their fishing boat in two. The men took to their dory and tried to row ashore, but a gale ripped the oars from the boat. The pair bailed water from the dory with their hats until passing out in the cold. When they awoke, they were being cared for by sixty-four-year-old Mary Gampher, mother of George Gampher, keeper of West Sister Island Lighthouse. Keeper Gampher discovered the two unconscious men after their boat washed up on the island and carried them to the lighthouse. Gampher fired flares into the sky so the fishermen could be retrieved, but heavy ice prevented boats from reaching the island. An airplane was sent to the island instead, but it crashed while attempting to land. The planes two injured pilots were cared for at the lighthouse along with the fishermen until tugboats were finally able to reach the island.

On July 3, 1936, the glazed portion of the towers lantern was removed, and the light was subsequently shown from a lens lantern placed atop the tower. West Sister Island Lighthouse was automated in 1937, at which time the keepers dwelling, built in 1868, was abandoned. Also in 1937, President Franklin D. Roosevelt established the island as a refuge and breeding ground for migratory birds and other wildlife. West Sister Island National Wildlife Refuge now protects the largest wading bird nesting colony on the Great Lakes.

Ironically, after being established as a wildlife refuge, West Sister Island was used by the United States Army for artillery practice during World War II. While neither the wildlife population nor the lighthouse suffered significant damage, the keepers quarters were destroyed, and it is reported that fuel tanks, jettisoned by dive bombers, can still be found on the island.

In January 1975, the government designated seventy-seven of West Sister Islands eighty-two acres as wilderness. The United States Fish and Wildlife Service (USFWS) maintains ownership of this portion, while the Coast Guard owns the lighthouse and the remaining five acres.

West Sister Island Lighthouse is still an active aid to navigation, and it is among the oldest lighthouses to survive on the Great Lakes. It is not open to the public, as visitors would pose a threat to the refuges vital nesting area. The island is home to many varieties of birds, including great blue herons, great egrets, black-crowned night herons, and double crested cormorants.

For a larger map of West Sister Island Lighthouse, click the lighthouse in the above map.

West Sister Lighthouse is best seen by boat. Jet Express has offered an excursion that passes the lighthouse. You can also try arranging a private charter through West Sister Charter Fleet.