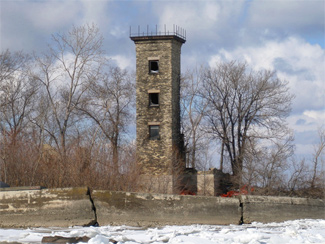 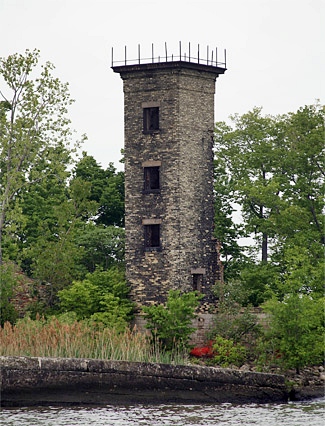 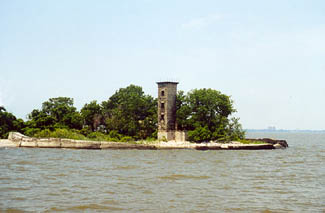 Located northeast of the mouth of the Maumee River, which empties into Lake Erie at Toledo, Turtle Island stands half in Michigan and half in Ohio. The Ohio side is home to historic Turtle Island Lighthouse, inactive for nearly a century. Though the lighthouse is now just a shell of what it once was, it still stands as a monument to the memorable figure after whom both it and the island are named.

Chief Little Turtle was born circa 1750 near present-day Fort Wayne, Indiana. Also known as Meshikinquah, he was both Miami and Mohican Indian by birth. By tribal consent, the half-blood became a leader of the Miami Indians, and his skill on the battlefield made him a legendary war chief. Little Turtle sided with the British during the American Revolution and guided the Indian resistance in the Ohio Country after the Treaty of Paris was signed in 1783. The chief helped lead two Indian victories, Harmars Defeat and St. Clairs Defeat, named after the beaten leaders.

Following a defeat in 1794 at Fort Recovery, Little Turtle realized that the English, who had been aiding the Native Americans against the settlers, no longer wanted to support their resistance. The Americans numbers and weapons put his people at a serious disadvantage, so Little Turtle encouraged his followers to enter peace negotiations. His fellow chiefs did not agree, however, and Little Turtle was stripped of his leadership position.

The following year, the Miami suffered defeat at the Battle of Fallen Timbers, and the chiefs decided to seek peace with the Americans. On August 3, 1795, the Treaty of Greenville was signed, in which the tribes agreed to cede all but the northwestern corner of modern-day Ohio to the Americans. Eighty-eight chiefs signed the treaty, including Little Turtle. It is said that when Little Turtle signed the treaty he remarked, I was the last to agree to make this treaty; I shall be the last to break it. Little Turtle kept his word, refusing to ever fight against the United States again even though the Americans would later break their promises made in the treaty.

Little Turtles peacekeeping efforts soon made him famous. He traveled to the East Coast and met with both George Washington and Thomas Jefferson at the capital. But while Little Turtle grew popular with the American people, he lost favor with his own tribe, many of whom were jealous of his fame. He would spend the latter part of his life encouraging his people to be peacekeepers, to abstain from alcohol, and to avoid the ways of civilization, only to die of gout on July 14, 1812. He was buried with full military honors by U.S. troops in Fort Wayne.

Turtle Island had served as a fort during the Battle of 1794, but by 1827, the United States government no longer had a need for it. Nearly seven acres in size, the island was auctioned off in Monroe, Michigan, and Edward Bissell of Lockport, New York was the highest bidder. Bissells intention was to preserve the tiny island as a piece of Northwest Territory history.

As commerce started growing in the Toledo area, the federal government decided that a navigational aid was needed in Maumee Bay. The main shipping channel ran just south of Turtle Island, and on May 21, 1831, the government purchased the island back from Edward Bissell for $300. Congress had already appropriated $5,000 to build a lighthouse there and $2,000 to combat erosion of the island.

Philo Scovile was contracted to build the lighthouse in 1831, and soon a conical, forty-foot tower, was standing on the north end of the island. The tower was topped by an octagonal black lantern and used eight lamps and reflectors to produce a fixed white light. Connected to the tower was a one-and-a-half-story dwelling that boasted a parlor, dining room, bedroom and kitchen.

One of the first keepers of the lighthouse was Samuel Choate, who fought in the War of 1812. Choate served until his sudden death of cholera in 1834 and was buried on the island by his son, Captain Seth Choate, who also died of cholera soon thereafter. Seths wife and two small children were left on the island alone, four miles from civilization, until a sailor rescued them when he noticed that the lighthouse was not lit.

By July 1836, an extraordinary rise in the level of Lake Erie had reduced the size of Turtle Island from eight acres to just over an acre. Lieutenant G.J. Pendergrast noted the importance of the light and the danger caused by the rising lake level in an 1837 report: This light is situated at the entrance of Maumee bay, and is highly useful. It is advantageously situated for directing vessels into this important bay, and no pains or expense should be spared in securing the small island on which it stands from being destroyed by the action of the lake.

In a desperate attempt at preservation, the government implemented a plan conceived by Isaac S. Smith, Superintendent of Public Works in Buffalo, New York. Under this plan, the size of the island was reduced to roughly a half acre by driving a double row of piles around a portion of the island and then using the area outside the piles as fill to elevate the land inside the piles. Good soil was then brought in from the mainland to cover the island. Smiths plan cost $16,700 to implement and proved effectual in preserving the lighthouse.

Turtle Island Lighthouse continued to operate through the next two decades. By 1857, however, its lamps and reflectors were in terrible condition, and a fourth-order Fresnel lens was installed in the lantern room.

Once the Civil War was over, Congress appropriated $12,000 to build a new lighthouse on Turtle Island using Milwaukee brick. The square, light tower stood forty-five feet tall, featured a cast-iron staircase, and was attached church-style to a one-and-a-half-story keepers dwelling, in a manner similar to the lighthouses at Marquette Harbor and Ontonagon. The tower was capped with a black lantern and retained the former lighthouses Fresnel lens. Access to the tower was through a door on its west side, above which the year of construction, 1866, was carved in sandstone. On September 12 of that year, Turtle Islands new tower shone for the first time. During the following years, a cistern, fog bell, and well would be added to the station.

It seems that the lighthouse did not function solely as an aid to navigation, however, as evidenced by a 1929 story in The Toledo Blade: Captain John Skeldon of Toledo recalls piloting, immediately after his return from the Civil War, a party of young people to the island for a dancing party on the tug GEORGE R. HAND shortly after the completion of the lighthouse. They were guests of the lightkeeper.

Storms eventually caused severe damage to the islands pile protection, and in 1884 a concrete retaining wall was built around the exposed sides of the island. During the same year, a storm house was built at the rear entrance to the dwelling, storm sashes were provided for the windows, and a cellar was dug under the dwelling. A new boathouse was erected in 1893.

Turtle Island Lighthouse continued to serve valiantly into the twentieth century. As time passed, however, business on Lake Erie continued to boom and it became clear that the shipping lane off Turtle Island was too shallow to accommodate the large ships sailing to and from Toledo. A new straight channel with a width of 400 feet and a depth of 21 feet was dredged through Maumee Bay, and Toledo Harbor Lighthouse was constructed atop a pier in Lake Erie to mark the entrance to the channel.

With the completion of Toledo Harbor Lighthouse, Turtle Island was decommissioned on May 15, 1904. Toledo Harbor Lighthouse was not activated until eight days later, and mariners were irate that the entrance was left unmarked during that period. A newspaper article said that mariners believed horse sense should have caused officials to place the new light in service before deactivating the old one.

The last keeper of Turtle Island Lighthouse was William Haynes, whose service began on March 29, 1875. Haynes is credited with saving seven people when their boat broke up in the choppy water near Turtle Island. Keeper Haynes raised his family on Turtle Island, converting the upstairs of the keepers dwelling into a one-room school. All totaled, the lighthouses and keepers on Turtle Island served a period of seventy-three years, and not a single shipwreck was recorded in the area during that time.

Once decommissioned, Turtle Island again found itself at public auction. This time the island boasted a beautiful building with a boathouse, an apple orchard, shrubs, and a garden. The lighthouse was sold to A. H. Merrill for $1,650 on December 6, 1904. As for the lens, it was removed and taken to the Maumee Bay range lights to be shipped to the lighthouse depot at Buffalo, New York. Unfortunately, no one knows the ultimate fate of the lens.

After being auctioned in 1904, Turtle Island has had multiple owners. By the late twenties, the island was the property of Captain George Craig. Around this time, The Blade of Toledo reported, Vandals have wrecked the house, stealing everything that could be salvaged from the structure except the grim, bare walls which stand as a monument to the service this light rendered for nearly half a century.

For a brief moment during the 1930s, Turtle Islands future looked hopeful. In 1933, the Associated Yacht Clubs (AYC) of Toledo entered into a five-year lease for Turtle Island with hopes to establish it as a summer yacht club. AYC worked hard to restore the house and refinish the tower, but ultimately decided that the island was too remote for many of its members.

Once abandoned by AYC, Turtle Island was again at the mercy of vandals, and what people did not destroy, the Palm Sunday tornado of 1965 did. The fierce storm hit the Ohio-Michigan state line with great force and reportedly blew Turtle Islands lantern right off the lighthouse.

Terry Mohn of Point Place started a not-for-profit organization to restore the light in 1991, but after a long and determined effort, he proved unsuccessful. Robert Wiley and Richard Martin purchased the island in June 1990 for $45,000 and had given Mohn and option to acquire the property for around $70,000.

After agreeing to purchase Turtle Island in $500 monthly installments from Jim Neumann for $57,500, Keith Fifer announced his plan in 2002 to restore Turtle Island Lighthouse, combat the erosion, and make the island available to the public. Fifer and Chris Bodi, his partner in the development, succeeded in building three vacation cabins on the island before a Monroe County Circuit judge in Michigan issued a stop order for having no building permit. In 1802, Ohio had set its boundary lines to include all of Turtle Island, but Michigan disputed the line, and the final boundary line, which divided the island equally between the two states, was not settled until a Supreme Court decision in 1973.

In 2008, Erie Township was going to pay contractors to remove the structures built in 2002 and then try to recover the cost through the property owners tax bill, but this plan was apparently never carried out. In 2009, ice floes caused substantial damage to at least one of the more modern structures on the island, and it seems only a matter of time till the entire island will disappear into Lake Erie.

For a larger map of Turtle Island Lighthouse, click the lighthouse in the above map.