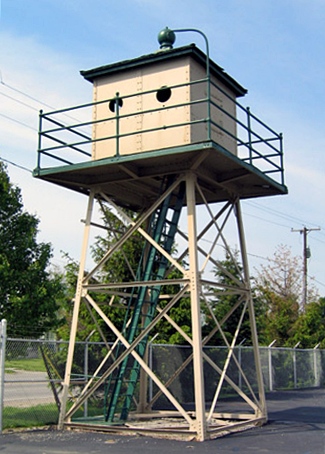 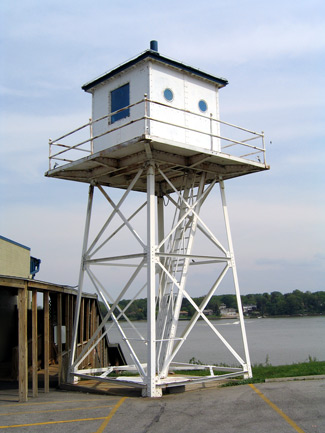 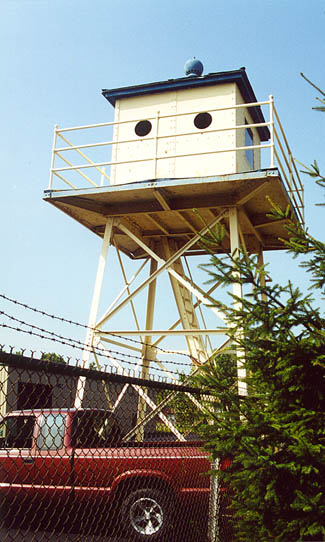 Looking at the truncated towers that now rest somewhat ignominiously next to an industrial equipment repair company and a former café, one would hardly guess that these lights came into existence on a stretch of water embroiled in early American history. Because of encroaching European settlements in the Great Lakes region during the late seventeenth and eighteenth centuries, Native American tribes were forced westward and southward. As a result, many came to rest in the Maumee River Valley, which soon became one of the last Native American strongholds in the Ohio Country. The valley was the site of many battles during the French and Indian War, but the definitive struggle came in 1794, when General Anthony Wayne, on orders from George Washington, gained control of the Maumee Valley for the United States of America. Several years later, the river valley was again the site of battles, this time during the War of 1812. Victory in that conflict solidified Americas control of the region and helped open the Northwest Territory for settlement.

After a beacon light had been authorized for the Town of Manhattan, situated at the mouth of the Maumee River, Lieutenant G.J. Pendergrast visited the site in 1837 and recommended that the light not be built as the channel leading from Turtle Island across Maumee Bay to the mouth of the river required multiple course changes. Instead, Pendergrast suggested that a lightship in use at the Straits of Mackinac be transferred to Maumee Bay. This suggestion was not carried out, but rather in 1855 Maumee Bay Lighthouse was built atop iron piles at a bend in the channel leading through Maumee Bay. This lighthouse had a rather short life as ice floes swept it away during the winter of 1857.

In 1868, three pairs of range lights known as Maumee Outer (Front and Rear), Maumee Middle (Front and Rear), and Maumee Inner (Front and Rear), were activated to mark the circuitous channel leading to the mouth of the river. These three ranges used a square wooden tower, whose edges were beveled in the upper part of the tower to create an octagonal shape, for the front range light, while the rear lights were displayed from a window in a large shed, which had two vertical stripes painted on it to indicate the range line. A head keeper was assigned to Maumee Inner Range, and a head keeper and an assistant keeper were assigned to the Middle and Outer ranges. This arrangement lasted until 1873, when the position of assistant keeper was eliminated and head keepers were assigned to both the Middle and Outer ranges.

Additional ranges, known as the Maumee Bay Range and consisting of an East Beacon, Main Beacon, and a South Beacon, went into service in 1884 with William H. Jennings as their keeper.

In 1890, work was underway on a new, eight-mile-long, straight channel through Maumee Bay. Congress appropriated $8,000 in 1893 and another $2,000 in 1894 to construct a new range, known as Manhattan Range, to mark the inner end of the channel. A site for the rear light of this range was purchased on Manhattan Point in North Toledo (the Town of Manhattan had ceased to exist by this time), while land on the bottom of Maumee Bay was ceded to the federal government by the State of Ohio for the front light.

Two wooden towers were built for Manhattan Range, and the lenses from Maumee Inner Range were transferred to the new lights. The Inner, Middle, and Outer range lights were all discontinued when Manhattan Range was established on April 1, 1895, though they remained standing as daymarks to mark the old channel. A dwelling, boathouse, and woodshed were built near the Manhattan Range Rear Light for Harvey H. Dayan, the keeper of the new range who was formerly in charge of Maumee Outer Range.

The Manhattan Range Lights followed the pattern of all range lights: they were built as a pair and spaced a significant distant apart, with the front light shorter than the companion rear light. Captains would align their vessels so that the rear light was positioned directly above the front light, and, keeping this alignment, they could proceed safely through the channel.

In 1897, the rear beacon, whose frame was open up to its enclosed top section, was entirely enclosed and its interior finished. Small cribs were put in place in 1899 so a 593-foot-long walkway, equipped with an iron handrail, could be built to link the front light to the shore. An iron oil house and a brick cistern were also added to the station that year.

In 1913, $15,000 was requested for the following improvement to the Manhattan Range Lights.

These range lights, marking the axis of the Maumee Bay straight channel leading to Toledo, should be clearly visible after passing the Maumee Bay Range Lights for a distance of about 5 miles. The present lights are too low and are frequently obscured by smoke. They are also sometimes blanketed by vessels mooring in the lagoon. These lights should therefore be raised in order to give greater efficiency. The present wooden towers are not structurally adapted for raising, and it is proposed to replace them with steel towers.

The requested funds were appropriated on July 1, 1916, and two steel, skeletal towers went into operation on the range on May 25, 1918, using the lenses from the old towers illuminated by seventy-five-watt concentrated filament lamps. Both lights were fixed red, with the front one having a focal plane of forty feet and the rear one eighty-six feet above mean lake level. The front tower stood forty-one feet tall, and the rear tower eighty-three feet tall.

As described in the following paragraph, batteries were provided as a backup energy source in case commercial power failed:

The lights are operated on 32-volt current, and the installation is so arranged that in the event of any interruption in the city current the light will operate from a set of storage batteries. The batteries have sufficient capacity to run the lights for two or three nights without recharging. The city current is taken through tungsten rectifiers, reducing the voltage from 112 volts alternating current to 32 volts direct current and connected with the lights and batteries in such a way that under normal conditions the batteries are automatically kept fully charged.

After nearly forty-two years of lightkeeping at Maumee Range and Manhattan Range, Keeper William H. Jennings retired from the Manhattan Range Lights on March 26, 1926. At that time, no other active keeper in the tenth district had more years of service than Keeper Jennings. The Lighthouse Service noted that his long record of service had been marked with faithfulness and willingness.

The Manhattan Range station was linked to Toledo Harbor Lighthouse in 1935 through the installation of radiophones, and three years later a lighthouse depot was established near the Manhattan Range Front Light. A brick depot building was erected, a powerboat was provided, and a channeled was dredged from the ship channel to wharf facilities for berthing the lighthouse tender.

In the late 1980s, the Coast Guard offered to sell the metal towers used for the Manhattan Range Lights to Hansen Industries, but a deal was instead agreed upon whereby Hansen Industries would be given the towers if they would simply remove them. Late one summer afternoon, a few employees of Hansen Industries departed their workplace aboard a boat with a barge and crane in tow. Cutting down the towers proved more difficult than expected, but after trimming the taller rear tower to match the twenty-foot height of its mate, the pair was transported back to Hansen Industries and placed in the parking lot. The owner of the Lighthouse Cafe later purchased the front tower and relocated it to his business at 2605 Broadway. The restaurant was later converted to the Six Pack Bar & Grill, and then the Lighthouse Banquet Hall. In 2015, the Toledo Zoo purchased the restaurant and front tower with plans to turn the restaurant building into administration offices. The Front Range is now painted red after having been white, while the Rear Range is pale yellow with a blue roof and ventilator ball.

The Manhattan Range Lights were still active in 2013, with the rear light being exhibited from atop a building and the front light from a post.

For a larger map of Manhattan Range Lighthouse, click the lighthouse in the above map.