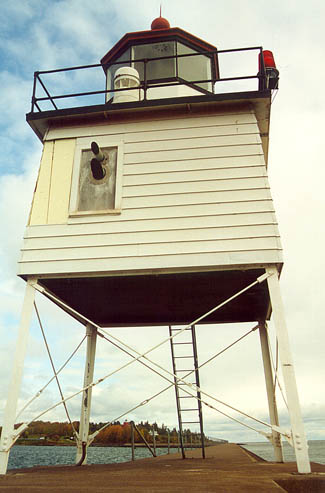 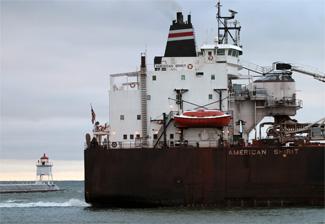 In 1887, a project was adopted to improve the harbor at Agate Bay by constructing breakwaters from the eastern and western points at the entrance. At that time, Agate Bay, also known as Two Harbors, had two elevated iron ore docks, and two merchandise docks. Two Harbors Lighthouse commenced operation on the eastern side of Agate Bay in 1892, and on December 14, 1895 a white, eight-day lantern light, shown from an iron post at an elevation of thirty feet above lake level, was established on the outer end of the eastern breakwater that extended from the shore near the lighthouse. In 1902, after the work on the breakwaters had been completed the previous November, the iron post was moved 300 feet from the angle of the pier to the outer end of the newly constructed ell, where the light was changed from a lens-lantern to a Pintsch gas light. Compartments were constructed in the breakwater to hold two eight-foot-long, cylindrical gas tanks, which were connected via pipes to the iron post supporting the light. The new gas light was first exhibited on September 10, 1902.

Four years later, the post light was replaced by an enclosed light tower, described in the Annual Report of the Lighthouse Board:

The combined light and fog-bell tower and an electrically operated fog bell, on the easterly breakwater, was completed on August 4, 1906, and on August 4 the light and fog-signal went into operation. The new tower is 33 ½ feet high to the focal plane, and is a square, pyramidal, skeleton iron structure, painted white, surmounted by a square watchroom and black octagonal lantern. The fog bell is hung from the front of the tower and strikes a single blow every 10 seconds.

A frame powerhouse, equipped with an oil engine, dynamo, and switchboard, was built onshore near the fog signal building at Two Harbors Lighthouse to provide power for the fog bell machinery. The weights used to power the striking machinery were wound up by a motor that was connected by wires to the powerhouse. The 1,500-pound bell was manufactured by Gamewell Fire Alarm Co.

On July 22, 1915, the fog signal on the breakwater was changed from a bell to an electric siren that sounded a two-second blast every twenty seconds, and an electric diaphragm horn replaced the electric siren in 1941. A light exhibited form a black mast was established on the west breakwater on September 23, 1916.

The east breakwater light was discontinued and removed in 1947 while a new breakwater was being constructed. In lieu of the breakwater light, two light buoys were put in place to mark the area until the work was completed in 1950, at which time the old light and fog signal were established at the outer end of the new east breakwater.

The 1906 lighthouse remains in service today, exhibiting a red flash every six seconds. The current foghorn can be activated by keying a microphone five times on VHF-FM Channel 79.

Located at the end of the breakwater which connects to land not far from the Two Harbors lighthouse.
Latitude: 47.01062, Longitude: -91.6696

For a larger map of Two Harbors Breakwater Lighthouse, click the lighthouse in the above map.

From Highway 61 in Two Harbors, take 5th Street South to 3rd Avenue. Turn left on 3rd Avenue, and then right onto 3rd Street. Follow 3rd Street to the parking area at its end from where you can walk out to Two Harbors Breakwater Lighthouse.