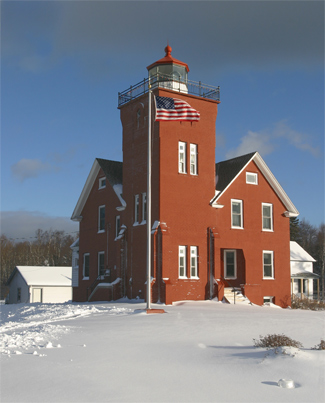 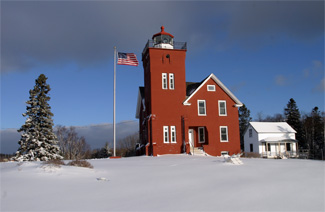 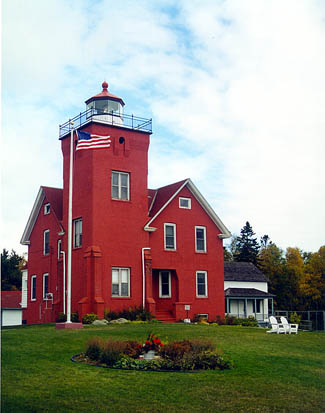 Two Harbors Lighthouse is situated on a point that separates Agate Bay and Burlington Bay. The village of Burlington was platted along the shore of Burlington Bay in 1856, while the village of Agate Bay was laid out in 1885. The two villages merged and reincorporated as the city of Two Harbors in 1907. Between 1880 and 1882, Charlemagne Tower, a financier from Philadelphia, purchased 20,000 acres of land in the Vermilion Range, located roughly sixty miles inland from Two Harbors. Tower partnered with other investors to form the Minnesota Iron Company in 1882, and using their pooled resources, construction of a railroad to link Agate Bay and the Vermilion Range commenced the following year. The first load of iron ore from the Vermilion Range was loaded on the steamer Hecla and consort-barge Ironton on August 1, 1884, and within two years, the Minnesota Iron Company was shipping a half-million tons of ore from Agate Bay each year.

Congress appropriated $10,000 on August 4, 1886 for a lighthouse and keepers dwelling at Two Harbors, which was rapidly coming into prominence by reason of its shipments of iron ore. Frustrated in its attempts to acquire a site on the headlands, the Lighthouse Board decided to place the light at the outer end of the harbor pier under construction in Agate Bay and estimated the work could be completed during the 1889 navigation season.

Due to the delay in starting the project, Congress had to renew the original $10,000 appropriation in October 2, 1888, and to this they added $5,500 on March 2, 1889, for a fog signal. Fog was very prevalent on Lake Superior, and the Lighthouse Board felt fog-signals were much needed at frequented harbors. As the pier in Agate Bay was deemed so narrow and so exposed to the sea that the station, if built upon it, would be insecure, the Lighthouse Board decided the station had to be built on the rocky promontory separating the two bays.

The fog signal boilers and machinery were completed under contract and delivered to the lighthouse depot at Detroit in the first half of 1890, but as the owners of the desired land were obstinate and refused to sell, the Board had to ask the State of Minnesota to intervene. Condemnation proceedings were initiated in July 1890, and a deed to the site was finally obtained two months later. After plans for a tower with an attached keepers dwelling were drawn up, advertisements for the work were circulated, and a contract was awarded in June 1891.

Work on the headland commenced on July 15, 1891. After an approach to the site from the harbors breakwater was cleared, blasting for the foundation of the lighthouse was carried out in August and September. Construction continued uninterrupted through the summer and fall, and the lighthouse and fog signal were finished in November, when the fog signal was tested and found to function satisfactorily. Too late to be of service that season, the station was put into operation on April 15, 1892, with Charles Lederle as its first head keeper and Henry Spurbeck as assistant keeper.

Two Harbors Lighthouse consists of a two-story, square, redbrick dwelling with gables facing the south and west, and a twelve-foot-square light tower attached between these gables. The tower, built three bricks thick, is surmounted by an octagonal lantern room originally equipped with a fixed, fourth-order Fresnel lens that had a focal plane of forty-three-and-a-half-feet above the ground. The frame, one-story fog signal building, which housed duplicate machinery and boilers for ten-inch steam whistles, was located 100 feet southwest of the lighthouse and was covered with corrugated iron on the outside and plain iron inside. Water for the steam whistles was procured from the bay by a fireplug ejector placed on a small crib. A tramway led from the station to the shore, 300 feet to the south.

In 1895, the stations barn was converted into a dwelling for the assistant keeper, and on December 14 of that year, an eight-day lantern light was established on the west end of the breakwater. During its first five years, the fog signal was in operation an average of 576 hours each season. In 1898, a parabolic deflector was placed atop a platform on the roof of the fog signal house to direct more of the sound seaward.

According to the Annual Report of the Lighthouse Board for 1902, the following changes were made to the station during the previous year:

The walks leading to the oil house and the outhouse were relaid and 420 feet of the fence were rebuilt; two new gates were provided. The iron smokestacks of the fog-signal boilers were taken down and replaced with a single brick chimney 40 feet high, and both of the boilers were connected to same with a new iron britchen. The deck of the sound deflector was relined, the interior was painted, and a storm door was constructed on the north side of the fog-signal house. Title was obtained for a right of way for a water pipe, and also for a right of way for a tramway, from the Minnesota Iron Company. The material required for rebuilding the tramway and water-supply crib of the fog signal was purchased and delivered at the Detroit light-house depot. Various repairs were made.

A well, fourteen feet deep and with a diameter of ten feet, was blasted into the rock at the station in 1906. A brick arch, fitted with a manhole cover covered the well. The water for the steam fog signal was switched from the pipeline running to the bay to the well in 1922.

The source of the light used in the Fresnel lens was switched from kerosene to incandescent oil vapor in 1909, and in 1921, electricity was introduced, which increased the lights power from 30,000 candlepower to 230,000 candlepower. Also in 1921, the fog signal was changed to an air diaphone sounding a group of three blasts each minute. The fourth-order Fresnel lens, a revolving four-sided lens that had replaced the original fixed lens in 1907, was removed in 1969 and transferred to the Inland Seas Maritime Museum. In its place, a twenty-four-inch aerobeacon was installed that rotates every twenty seconds to produce the following signature: 0.4 seconds of light, 4.6 seconds of darkness, 0.4 seconds of light, and 14.6 seconds of darkness. This beacon remains in use today.

As a further aid to mariners, a class C radiobeacon was established at Two Harbors Light Station in 1941. The beacon operated at a frequency of 308 KHz and was synchronized with the fog signal for distance finding.

The fog signal was discontinued in 1973, and in 1981 the light was automated, allowing its Coast Guard personnel to be stationed elsewhere. The Lake County Historical Society leased the property in 1987, and the following year they started to provide tours of the station. In 1998, ownership of the lighthouse was transferred to the historical society through a bill passed in Congress. To help provide funds for the restoration and maintenance of the station, the society opened the lighthouse as a bed and breakfast in 1999. The society assumed responsibility for the light from the Coast Guard in 2001, and now each month volunteers clean the lenses and reflectors in the aerobeacon, check the lamps, and change the oil in the rotating mechanism. On November 25, 2019, Two Harbors Light went dark after the revolving DCB-224 aerobeacon in the lantern room failed. The historical society removed the aerobeacon on July 11, 2020 and then installed a Maxiluna-300 beacon that will be used until funds can be raised to purchase a rotating LED beacon that should return the familiar sweep of the former light.

In February 2015, the stations fourth-order Fresnel lens, which had been on display at the Inland Seas Maritime Museum, was returned to Two Harbors and placed in an exhibit case.

Visitors to the lighthouse can tour three buildings: 1) The light tower, whose forty steps wind up through the four stories to the lantern room. The bottom story of the tower originally served as the bedroom for the second assistant keeper, a position added to the station in 1908. 2) The assistant keepers dwelling  a two-story wooden structure that has been restored to the late 1880s era. 3) The pilothouse from the ore carrier Frontenac.

For a larger map of Two Harbors Lighthouse, click the lighthouse in the above map.

The lighthouse is owned by the Lake County Historical Society and is managed by Lighthouse Bed and Breakfast. Grounds open, lighthouse open to tours daily in season and to overnight guests year round.