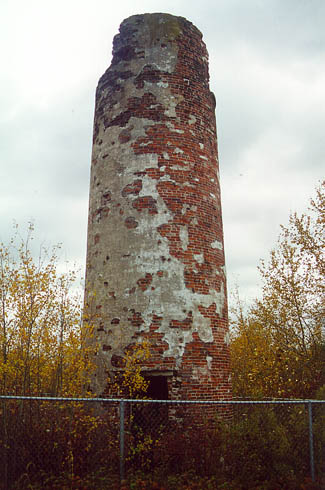 Rapids on the St. Marys River prevented access to Lake Superior from the lower Great Lakes until a canal and a set of locks at Sault Ste. Marie were completed in 1855. This new canal bypassed a twenty-one-foot drop in the river and launched the development of harbors and facilities on Lake Superior to exploit the regions natural resources.

At the western end of Lake Superior, the St. Louis River flows into Superior Bay, a large, natural harbor protected by the worlds longest freshwater sandbar, before emptying into the lake. When work on the bypass canal at Sault Ste. Marie started in the summer of 1853, speculators began buying up land on Superior Bay. The first log cabin was built there in September 1853, and the City of Superior was officially incorporated a year later.

When the State of Minnesota was created in 1858, the St. Louis River was used as the northern dividing line between Wisconsin and Minnesota, and the City of Duluth sprung up on the Minnesota side of the river to compete with Superior. Reporting on harbor improvements at Superior, a member of the U.S. Army Corps of Engineers stated that the harbor is to Lake Superior and the country south and west and northwest what the harbor of Chicago is to Lake Michigan and the regions in the same directions.

The long sandbar protecting Superior Bay is made up of Minnesota Point, which projects eastward for seven miles from Duluth, and Wisconsin Point, which extends three miles from the Wisconsin shore. Realizing the need to mark the entrance to the harbor, known as Superior Entry and defined by these two points, Congress appropriated $15,000 on March 3, 1855 for a lighthouse on Minnesota Point. Work on the foundation of the structure started in the fall of 1856, and materials were stockpiled at the point that year in preparation for completing the lighthouse the following season. With the opening of navigation in 1857, work resumed on the lighthouse, but cold weather set in before it could be completed, and the light was not activated until the spring of 1858.

The contract for constructing the lighthouse and two wooden piers to mark Superior Entry was awarded to Captain R.G. Coburn of Superior, but stonemason Adam Dopp, a German immigrant, is credited with doing most of the work on the lighthouse. The towers foundation was laid with blue rubblestone, while red brick, brought by ship from Cleveland, was used in the tower and attached one-and-a-half-story dwelling. The dwelling was topped with a slate roof. The forty-foot tower had two, twelve-pane windows, one at ground level and the other on the opposite of the tower just below the lantern room, and was coated, inside and out, with a lime and cement mortar mixture. A fourth-order Fresnel lens, illuminated by a kerosene lamp, produced a fixed red light inside the towers ten-sided lantern room. The total cost of the lighthouse came to $13,675, and R.H. Barrett, a local merchant, was appointed the first keeper.

After a decade of use, the tower was in good condition, but the Lighthouse Board reported issues with the rest of the structure: The dwelling leaks badly around the chimneys. The rain and soot have discolored the walls. The plastering has fallen in many places, and is loose in nearly all the rooms. It is proposed to replaster the house throughout, and to reflash the chimneys. This repair work was carried out in 1869.

The square, wooden pierhead tower had a height of forty-eight feet and was perched atop cribwork that rose nine-feet-six-inches above lake level. The tower was painted white and was topped by an iron lantern. The Lighthouse Board noted in 1886 that the northeast corner of the tower had been covered with sheet-iron to a height of eleven feet, to protect it from heavy seas. A cellar in the cribwork beneath the tower held a tank for gasoline that was used by a Combination Gas Machine in the lower part of the tower to produce gas that was burned in the lantern room. The gas machine was used at stations that may have been inaccessible for days, during storming weather, and saved the expense of having to build elevated walks to reach the lights. The keepers were still required to visit the light daily, when possible, to clean the lens and lantern and ensure the machinery was working properly.

The Lighthouse Board noted in 1891 that over 900 vessels were passing through Superior Entry annually with cargo worth in excess of $28 million. In 1893, the pierhead light was relocated from the northern pier on the Minnesota side to the southern pier on the Wisconsin side. At that time, an elevated walkway was constructed to provide access to the beacon in stormy weather. The keepers dwelling was transferred from Minnesota Point to the Wisconsin side of the entrance in 1894 and so arranged that each of the two keepers had six rooms.

While lighthouse keepers left Minnesota Point in 1894, the Lighthouse Board built a depot on Minnesota Point, after Congress appropriated $14,000 in 1903 for its construction. Today, the truncated remains of Minnesota Points redbrick tower and the cavernous concrete storehouse/oil house at the site of the former depot stand as testaments to years of Lighthouse Service activity on the point. The cylindrical tower, surrounded by a chain-link, was added to the National Register of Historic Places in 1974, but little has been done to preserve the fragile remnants of Minnesotas first lighthouse.

For a larger map of Minnesota Point Lighthouse, click the lighthouse in the above map.

From Interstate 35 in Duluth, take Exit 256-B to Lake Avenue. Follow Lake Avenue for about 4.5 miles to Sky Harbor Airport. Driving past the airport is not permitted. Park by the airport and walk the remaining 1.5 miles out to the remains of Minnesota Point Lighthouse.

The lighthouse is owned by the U.S. Army Corps of Engineers. Grounds open, tower closed.